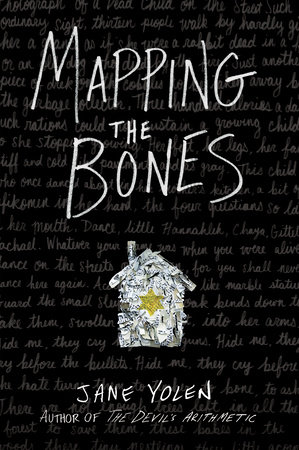 Photograph of a Dead Child on the Street
Such an ordinary sight, thirteen people walk by,
hardly giving her a glance
as if she were a rabbit dead in a field,
or an old dog who died by the fire.
Just another piece of drek on the cobbles
to be taken away by the garbage collector.
Three hundred calories a day, such rations
could not sustain a growing child,
so she stopped growing.
Her feet, her legs, her face stiff and cold
like pavement, and as gray.
This child who once danced
about in her mother’s kitchen,
a bit of afikomen in her hand,
the four questions so lately in her mouth.
Dance, little Hannahleh, Chaya, Gittel, Rachael.
Whatever your name was when you were alive,
dance on the streets of Heaven,
for you shall never dance here again.
—Chaim Abromowitz


Chaim was thinking too much about the words he would have to find to convince Motl, so he wasn’t paying careful enough attention to the man in front of him, a nondescript, hunched-over, dark-coated scarecrow. A man who turned to the right to avoid a pile of rags. Chaim only saw him at the last moment.

Cursing silently at his own carelessness, Chaim checked his forward movement and only barely avoided stepping on the pile. He was deathly afraid he might get tangled in the rags. There was a soldier standing on the corner who might have noticed him then.

For a moment, he thought, Rags can be useful. Mama could al­ways sew Gittel a new skirt with those rags. Or Papa a warmer shirt, and maybe that would help with his cough. In the ghetto it had come to this—ragpicking.

However, he didn’t dare bend over or slow down, so he just made a quick hop-step to the right. But as he glanced at the bun­dle from the corner of his eye, he realized why the man had stepped around it rather than simply trod on it.

The thing wasn’t actually a bundle of rags, but a small girl, maybe five or six, in a washed-out blue head scarf, threadbare blue dress, and a scruffy coat with the requisite yellow star on the sleeve. She lay curled up on the ground, one scrawny hand held out as if begging, the other clutching a doll as ragged as she. But her mouth was open, her eyes wide, unblinking. There was a bullet hole in her forehead that looked like a third eye. A dark bruise on her upturned cheek.
Gittel had such a dress once, he thought. That blue.

Even as he walked on, his eyes filled with tears. A line of a poem sledgehammered into his startled mind. Dance on the streets of Heaven, for you shall never dance here again. It was so complete, he wondered if he’d read it somewhere. He often had such things in his head—words that sang but were never spoken aloud. Words that he wrote down in his journal. So he wouldn’t forget. Though he doubted he could forget this little girl, that line.

And then he shook himself. Thinking of poetry when she lay dead behind him was awful. Unforgivable. For a brief moment, he wondered if he was turning into a horrible person. Yet he walked on. He had to walk on.

He’d never actually seen someone dead before, though he’d overheard people in the apartment building talking about them. Most had been shot or beaten to death and left on the street like a piece of garbage. But this was only the third time in a year that he’d been out on the street alone. Papa and Mama had insisted, and he and Gittel obeyed, of course. Though they were allowed to walk up and down the stairs in the apartment, even run along the hallways for exercise.

But who would shoot a little girl? He bit his lip. Who would beat her? It made no sense, and suddenly—for the first time since they’d been moved into the ghetto—a real, deep-rooted fear invaded him. Maybe because he was alone on the street, even in the midst of a crowd. Maybe because the girl was so young. Maybe because she could be mistaken for rags. Trod upon, kicked to the gutter, be­cause no one had claimed her. Maybe all of those things.

That could be Gittel, he thought. Or the new girl, Sophie. She didn’t seem so bad. He was no longer worried about himself. He kept walking.

He was already almost a block away from her now, moving as quickly as was possible in the ghetto, as if her death were a disease he might catch.

And then he dared a glance back, asking himself if he should just go back and pick her up and take her to the nearest house. Or nearest alley.

But which house? What alley? And how could he explain the dead girl to anyone? He could hardly explain anything to his own family.

The soldier on the corner was watching. Chaim could see that out of the corner of his eye, though he was careful not to swivel his head to look.

He stared grimly down at his feet, realizing that he knew nei­ther the dead girl’s name nor where she lived. She could be Irena or Hannah, Chaya, Rachael. All he knew about the girl was her death. And her doll.

About Mapping the Bones

From the best-selling and award-winning author of The Devil’s Arithmetic, Jane Yolen, comes her first Holocaust novel in nearly thirty years. Influenced by Dr. Mengele’s sadistic experimentations, this story follows twins as they travel from the Lodz ghetto, to the partisans in the forest, to a horrific concentration camp where they lose everything but each other.

It’s 1942 in Poland, and the world is coming to pieces. At least that’s how it seems to Chaim and Gittel, twins whose lives feel like a fairy tale torn apart, with evil witches, forbidden forests, and dangerous ovens looming on the horizon. But in all darkness there is light, and the twins find it through Chaim’s poetry and the love they have for each other. Like the bright flame of a Yahrzeit candle, his words become a beacon of memory so that the children and grandchildren of survivors will never forget the atrocities that happened during the Holocaust.

Filled with brutality and despair, this is also a story of poetry and strength, in which a brother and sister lose everything but each other. Nearly thirty years after the publication of her award-winning and bestselling The Devil’s Arithmetic and Briar Rose, Yolen once again returns to World War II and captivates her readers with the authenticity and power of her words.

Praise for Mapping the Bones:

“Jane Yolen’s Mapping the Bones is a swift and deadly drama with overtones of dark fable we all wish we could forget. But this book, a shining star held in a trembling palm, requires us to remember.” –Gregory Maguire, internationally bestselling author of Wicked

“Mapping the Bones is spare and beautiful and haunting. Jane Yolen has created a masterpiece.” –Kimberly Brubaker Bradley, New York Times bestselling author of The War That Saved My Life

“Master storyteller Jane Yolen has outdone herself. This is a compelling, important, necessary, and timely book that deserves the widest audience possible.” –Lesléa Newman, award-winning author of Still Life with Buddy

“In the hands of the superb Jane Yolen, folklore and fact connect in a harrowing testimony to horror and to love. Brutal, relentless, prophetic, and full of truth.” –Elizabeth Wein, New York Times bestselling author of Code Name Verity

“Yolen does a superb job of dramatizing the horrors of WWII and the Holocaust, bringing vivid fear and suspense to her captivating story. It makes for altogether memorable and essential reading.” —Booklist

“[A] breath-taking and heartbreaking look at the horrors of war and the lengths people go to overcome.” —Voice of Youth Advocates

“Fans of Yolen’s The Devil’s Arithmetic will be engrossed in this story until the last page.” —School Library Journal

“[A] well-rounded story of a very difficult time that shows the resiliency of these young people.” —School Library Connection

Every Book Hitting Shelves in March 2018

Ah, March. Flowers blooming, temperatures rising, and books stacking up! We have SO many great reads this month–from series enders, to tear-jerking standalones, to anniversaries of beloved novels, we’ve truly got it all for you this month!   3/6: Hero at the Fall by Alwyn Hamilton: Rebel of the Sands fans, rejoice! The breathless finale to the … Continued
See More

See the EXCLUSIVE Cover Reveal for MAPPING THE BONES by Jane Yolen!

We are so thrilled to reveal the cover of the newest book by Jane Yolen, the legendary author of The Devil’s Arithmetic, a moving story about a girl who gets transported back to 1940’s Poland and experiences the stories her Jewish family told her about the Holocaust firsthand. It’s been nearly 30 years since The Devil’s Arithmetic came out, and Mapping … Continued
See More
SEE MORE