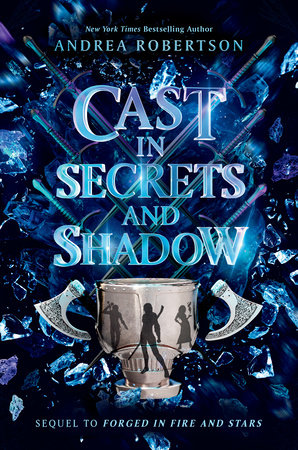 
Winning the war left a bitter taste in Captain Liran’s mouth. The conquest of Saetlund could hardly be called a war; it had been a rout. Too short and too easy. What forces King Dentroth sent against the invading Vokkans were pitiful, lacking in training and discipline. On the plains of Sola, Saetlund’s forces had melted before Liran’s advance once the storied Loreknights had fallen.

Liran believed in gods; rather, he believed in one god, Vokk the Devourer. He’d seen Vokk with his own eyes—a visage he wished with each breath he could forget—and knew it was that god who had kept his father alive all these centuries. People speculated that Fauld the Ever-Living wasn’t truly immortal, but Liran knew the truth. For so long as Vokk sustained his father, the emperor would not die.

To Liran, Vokk was all-powerful and terrifying. It was Vokk’s army that had consumed all the world but this last kingdom, Saetlund.

But Liran did not love his god.

And this war . . . it was meant to be the last. Saetlund was the final conquest. Liran had been told that the kingdom held this honor due to lore of old, which the captain put no stock in. All that mattered to him was the idea that after Saetlund there was nowhere else to claim, and as far as Liran could see that meant soon the world would starve.

What of the Devourer then? Would Vokk abandon his people and find a new world to consume? Liran worried the god would consume his worshippers before abandoning this realm.

Saetlund claimed to have its own gods, but those same gods were supposedly responsible for the champions—so-called Loreknights—Liran’s foot soldiers had cut down with ease. They’d been the opposite of legendary: only adequate with their arms (which showed no signs of being magical, as myths claimed) and lacking in honor. Three of the Loreknights had tried to flee when they saw their fellows laid low. Liran’s cavalry had run them down in a matter of minutes.

Liran had heard it said that the empire delayed its attack on Saetlund because these knights were nigh invincible. It seemed Emperor Fauld had waited centuries for no good reason. When the Loreknights fell, an audible groan swept through King Dentroth’s army. Chaos ensued.

Soldiers stopped obeying their officers’ orders. Their ranks split, faltering. The Vokkan commander seized this advantage by sending his troops through these breaks to flank the enemy. The Vokkan forces so outnumbered Saetlund’s that Liran soon had the bulk of the kingdom’s army surrounded. After a third of Dentroth’s soldiers had fallen, the remainder surrendered, opening a path to the capital city of Five Rivers.

The Vokkan army had prepared for a siege. They needn’t have. Five Rivers had devolved into frenzied panic. When word spread in the city that King Dentroth had fled rather than fight, its citizens poured out of the city, attempting to flee and surrendering in droves to the advance troops sent to scout positions.

While the commander managed the hordes of Saetlunders suddenly on their hands, Captain Liran led a contingent of his troops into the city to make their assault on the palace. To Liran’s chagrin, his brother Zenar insisted on accompanying them into the city. There was someone in the palace he wanted to capture, someone other than the king. Zenar’s demand had surprised Liran. Aside from the spells they maintained to fortify Vokkan soldiers, the ArchWizard and his followers didn’t trouble themselves with banal events like war, but this time was different.


At the palace gates, they faced the most resistance. Unlike Saetlund’s army, the palace guard fought hard, falling back only when forced to, then establishing new defensive positions and fighting on.


Their efforts, though honorable, were futile. Bit by bit their numbers diminished. Liran’s forces took the palace with only a few losses, where the palace guard were slaughtered. Liran’s targets were the royals, but Zenar begged a portion of his brother’s soldiers to hunt down the palace blacksmith. Liran would have refused but for the mad gleam in his brother’s eyes. When Zenar became rabid about an issue, Liran knew better than to thwart him. And Zenar’s strange request was in a way a gift to the captain, because the ArchWizard’s presence would have posed a problem for the work to come. Liran couldn’t have his brother interfering with his plans for the king and queen.


The fight outside the royal quarter was ferocious. Liran led from the front, cutting men down with sword and blocking their attacks with shield. The captain wished these last guards would surrender, but knew they would fight as long as they could. They were the type of soldiers Liran wanted in his army; that they fought for a coward who hid behind walls and doors rather than face his enemies was a tragedy.


When the king’s guard had been defeated, Liran strode into the royal chamber. Dentroth and his queen, Kalhea, cowered together behind the bed, as if its four posters offered a defensible position. A final guard stood between Liran and the royals. They sparred briefly, but Liran was the superior fighter and the other soldier fell. When Liran approached the king, Dentroth stayed on his knees while the queen wept.


“Mercy.” Dentroth went so far as to try to grip the hem of Liran’s surcoat.


The captain’s lip curled up in disgust, but he said, “You shall have it.”


He knew the king hadn’t been begging for death. Dentroth was too much of a coward to perceive his demise with anything but sheer horror. But Liran had given the king and queen a gift. Death was mercy.


Turning to his men, he said, “The last of the king’s guard did this. He’d been ordered by the king to kill them before letting them be taken.”


Liran’s soldiers nodded. They understood their captain’s motivation and agreed with it—that was the reason he’d selected them for this mission. It was also why he’d been glad Zenar had a separate purpose after entering the palace. His brother would have wanted the king and queen alive.


That was why they had to die.

About Cast in Secrets and Shadow

Game of Thrones meets Shadow and Bone in the second book in this action-packed fantasy from Andrea Robertson, the internationally bestselling author of the Nightshade series.

Ara has taken up her mantle as the Loresmith–but her journey is far from over. After suffering betrayals and losses, Ara, Nimhea, Lahvja, and Teth must try to come together and find the Loreknights across the kingdom. The Loreknights are their only hope in overthrowing the evil Vokkans and putting Nimhea on the throne for good. But their journey will put Ara and her companions in grave danger–from the endless pursuit of the Vokkans to perilous encounters with the gods, and the near impossible trials they face along the way–will they be able to survive long enough to help the rebellion?

And through it all the Vokkans are expanding their reach throughout Saetlund, putting everyone Ara and her friends love at risk. Only Ara can forge a way forward, take up her powers, and fight to change the world–no matter what it costs.

From internationally bestselling author Andrea Roberston comes the second book in a gorgeously written new fantasy series perfect for readers of Leigh Bardugo’s Shadow and Bone or Sabaa Tahir’s An Ember in the Ashes series.

2021 has been filled with amazing reads of all categories, and we want to make sure you haven’t missed out on any! Scroll down to see our recap of some of 2021’s top trending fantasy reads!   Winterkeep by Kristin Cashore  The highly anticipated next book in the New York Times bestselling, award-winning Graceling Realm series, which has … Continued
See More

2021 has filled our shelves with incredible reads…and there’s more to come! So, here are the reads to look out for in the second half of 2021!   We Are Inevitable by Gayle Forman – 6/1 Aaron Stein used to think books were miracles. But not anymore. Even though he spends his days working in … Continued
See More

Love getting lost in a YA trilogy? Here are 9 that will absolutely sweep you away!   Forged in Fire and Stars by Andrea Robertson Games of Thrones meets Shadow and Bone in this action-packed fantasy from the internationally bestselling author of the Nightshade series. Ara has always known the legend of the Loresmith: the blacksmith who served … Continued
See More

Summer Reading Recommendations for Your Shelf

Prepare your shelf! We’ve collected your perfect summer reading recommendation list, so let’s get started!   For your June reading goals… We Are Inevitable by Gayle Forman – out now! Aaron Stein used to think books were miracles. But not anymore. Even though he spends his days working in his family’s secondhand bookstore, the only … Continued
See More

Excerpt Alert: CAST IN SECRETS AND SHADOW by Andrea Robertson

If you fell absolutely in love with Forged in Fire and Stars by Andrea Robertson last year, make sure you keep your eyes peeled for its sequel Cast in Secrets and Shadow hitting shelves THIS MONTH! If you love Shadow & Bone or miss Game of Thrones, it’s definitely time to pick this series up. Scroll down to read a sneak preview! PROLOGUE … Continued
See More

Cover Love: stunning 2021 books that are just as beautiful on the inside!

2021 has been killing it in the cover category, so here are a few of our favorite covers from this year so far–on books that are even more gorgeous on the inside!   We Are Inevitable by Gayle Forman That BLUE!!! This heartfelt novel is must for both the cover love, and being instant favorite summer … Continued
See More

Stacking that summer reading list? Here are a few you DEFINITELY don’t want to miss. Scroll down to see books hitting shelves in July 2021!     The Taking of Jake Livingston by Ryan Douglass – 7/13 Get Out meets Danielle Vega in this YA social thriller where survival is not a guarantee.   Super Fake Love … Continued
See More

It’s cover reveal time! Today, we’re revealing the cover for Andrea Robertson’s Cast in Secrets and Shadows. Game of Thrones meets An Ember in the Ashes in the second book in this action-packed fantasy from Andrea Robertson, the internationally bestselling author of the Nightshade series. Following the events of Forged in Fire and Stars, Ara has taken up her mantle as the … Continued
See More
SEE MORE