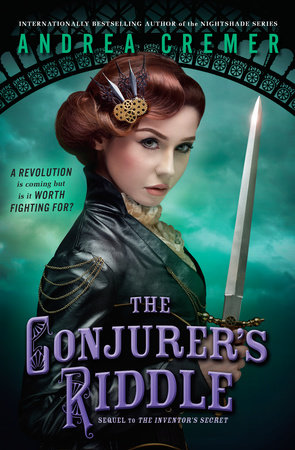 About The Conjurer’s Riddle

The Revolution is beginning–and Charlotte may be on the wrong side.

In this sequel to The Inventor’s Secret, Charlotte and her companions escape the British Empire, but they haven’t left danger behind. In fact, if they go against the revolutionaries, they face even greater peril.

Charlotte leads her group of exiles west, plunging into a wild world of shady merchants and surly rivermen on the way to New Orleans. But as Charlotte learns more about the revolution she has championed, she wonders if she’s on the right side after all. Charlotte and her friends get to know the mystical New Orleans bayou and deep into the shadowy tunnels below the city–the den of criminals, assassins and pirates–Charlotte must decide if the revolution’s goals justify their means, or if some things, like the lives of her friends, are too sacred to sacrifice.

This alternate-history adventure series asks the questions: What would have happened if America had lost the Revolutionary War? And what would people be willing to do to finally taste freedom?

Praise for The Conjurer’s Riddle:

“This is classic steampunk [with] exotic and picturesque locales, lots of interesting machinery, and the adrenaline rush of following the adventures of an honest and fearless heroine. A suitably swashbuckling sequel.”–Kirkus Reviews

“This invigorating series neatly fits into the sagacategory, with loads of adventure, lots of explosions, plenty of pirates, and still some pages left forromance. The dramatic ending sweeps readers right toward the next book.”–Booklist

“Fans will enjoy seeing Charlotte take on a more serious role as she faces multiple factions while forging her own path.”–VOYA

Praise for The Inventor’s Secret:

* “Cremer…creates an inventive blend of steampunk and alternative history in this new series. She gives readers a fantastical world with mechanical wonders and an opulent vintage setting. The characters are interesting and well developed. Readers will be drawn to future installments.”–VOYA, starred review

Usually, those of us who love our books with a heaping side of romance are happy to be feeling like from page one. But then there are those loves that start off with great chemistry and build over time to something amazing, to the point where we’re like And when it happens, it’s all the … Continued
See More

Some of us have been fans of the Outlander series for years (ahem), but with the premiere of the Outlander TV show on Starz, many new people have been inducted into the glorious kilt cult of Jamie Fraser. But really: how are you supposed to fill the weeks between episodes? We’ve got your back. Here are 8 perfect reads for Outlander fanatics to … Continued
See More

Summer is magical on its own: It’s the season of sunshine, beaches, romance, fireworks, and popsicles 24/7. That’s why there’s something special about reading fantasy books in the summer– they heighten the experience. So we’ve rounded up the 9 with top-notch magic, legends, curses, power struggles and romance guaranteed to add some sparkle to your TBR: … Continued
See More

Got a few hours? A few days? A few weeks? Check out our Fantasy By the Numbers infographic to discover your next great fantasy read!     Want to know a little more about each of these books? Look no further!
See More

Instead of meeting a wall of humidity and heat every morning, the reinvigorating cool of fall is making its way in. Predictably, the pumpkin spice flurry has descended, boots are being dug out from closets, people are remembering why flannel is heaven on earth, and everyone is planning their trips to go apple picking for … Continued
See More
SEE MORE

@PenguinTeen: RT @AshWrites: Hi friends! Wanted to have a quick chat with you about the the Flyy Girls Series I have coming out in September. It's about…

@PenguinTeen: Elias and Helene have such different outlooks on being part of the Martial Empire, and yet you can tell they care a… https://t.co/RVnmCRaiH4