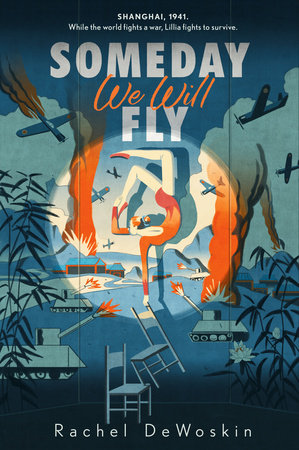 Someday We Will Fly

I first saw Shanghai from over my father’s shoulder. I was feverish the final two weeks on the ship, as if my hair had been protecting my head and once I was without it, sickness leaked in. I missed the last three ports: Penang, Singapore, Hong Kong. Of course I wouldn’t have been allowed off the ship anyway, but I was sorry not to have seen them. When I woke, soaked with broken fever, we were descending the ship’s gangplank, Papa carrying Naomi, me, and all of our things. So I guess it was for the best that we had so little with us.

As far as I could see there were human beings, throbbing with heat, an electric mob of running, waving, shouting. There were animals and also men pulling carts, racing, climbing onto and off of boats so rickety they looked as if they’d been made by hand from paper, people entering and exiting buildings; everywhere store fronts and signs covered with slashes and dots that made a language I couldn’t understand. I reached across Papa’s neck and held Naomi’s hand. “What day is it?”

I heard him say, “July.” We had been traveling for over a month, and now it was July and we were here, in Shanghai. Out from the endless rush of people carrying meat, lumber, bricks, passengers, giant pieces of glass emerged a man on a bicycle. He was the first person I could see individually somehow. There were so many of us. He had brown skin and bright eyes, and was watching the street ahead of him. How was he balancing his bicycle? The back was stacked with so many packages it looked like a house made of boxes. A pole crossed his neck and shoulders; from each end hung pails that seemed to pull the metal down, bending it on either side and digging a groove in his flesh. He moved so slowly through the hot street. He was the first Chinese person I’d seen, and he looked the same as anyone else, but also different. I felt a wild confusion that resembled excitement. What did I look like to those who weren’t me?

Another man pulled a two-wheeled cart by, fast. He was thin as a single bone. In his cart perched a woman whose white hair flew behind her. She held a fur blanket with an animal’s head still attached. It had teeth. I was surprised to see a blanket in such heat. Only when the man veered around them did I notice the group of men in payos, side-curls. Jewish men, walking toward the dock, moving and speaking as if none of the chaos around them were happening, as if it weren’t a thousand degrees and impossible to breathe. As if we hadn’t landed on another planet. I watched them, amazed by their calm, by the possibility that they—and we—could belong here.
An open-backed truck arrived and we climbed on, Papa lifting Naomi and me, saying it was from a Jewish service, had come to collect us. We were packed tight enough to be held up by each other’s bodies. I smelled my own fear, all our sweat, a hundred broken fevers. I wished desperately for a shower. We’d washed in a small cubicle on the ship. I was hoping so much for an actual bath here. We were all, even chatty Alexi, too shocked to speak. Except Naomi, who shouted, “Ah, ah, ah,” from Papa’s arms.

Her eyes had begun to look green—they’d been gold before, the color of coins or a lion’s mane. I was glad for this change and relieved she had no words. Even if we’d known what to say about this place, what language would we have used?

The dock was behind us, baking in the sun, crowded with men, some bearded with turbans, others in white shirts and khaki shorts, still more in military uniforms. I hoped to see the religious men again, but they were gone. I knew, in a strange and certain way, just how alike we suddenly were, those men and I. Even though all that connected us was being here, being Jewish. In that instant of looking out at the city, I saw everyone else and also saw myself among them, another stranger.

About Someday We Will Fly

Warsaw, Poland. The year is 1940 and Lillia is fifteen when her mother, Alenka, disappears and her father flees with Lillia and her younger sister, Naomi, to Shanghai, one of the few places that will welcome them. There they
struggle to make a life; they have no money, there is little work, no decent place to live, a culture that doesn’t understand them. And always the worry about Alenka. How will she find them? Is she still alive?
Meanwhile Lillia is growing up, trying to care for Naomi, whose development is frighteningly slow from malnourishment. She attends school sporadically, makes friends with Wei, a Chinese boy, and finds work as a performer at a “gentlemen’s club” without her father’s knowledge. As the conflict grows more intense, the Americans declare war and the Japanese force the Americans in Shanghai into camps. More bombing, more death. Can Lillia and her family survive, caught in the crossfire?

DIG by A.S. King is a Printz Award Winner!

Dig by A.S. King just won the Printz Award! For those of you who might be new, the Michael L. Printz Award awards the best books written for teens each year, based purely on its literary merit. Basically: it’s a big deal. Think the Oscars for books. So, we are SO excited to share that Dig by A.S. … Continued
See More

Read an Excerpt from Someday We Will Fly!

From the author of Blind, Someday We Will Fly is a heart-wrenching coming-of-age story set during World War II in Shanghai, one of the only places Jews without visas could find refuge. Scroll down for a special excerpt!   In Hongkou, you could meet someone one day and find yourself living with him the next. Even if … Continued
See More

There are some amazing reads in our near future…and ironically they’re set in the past. Basically, if historical fiction is your jam, you definitely don’t want to miss out on these top three picks!   1. Lovely War A sweeping, multi-layered romance with a divine twist, by the Printz Honor-winning author of The Passion of Dolssa, set … Continued
See More

New year, new you, and omg, NEW BOOKS TOO!   1/8 Reign of the Fallen by Sarah Glenn Marsh – The first novel in this unique fantasy series follows a talented necromancer who must face down a deadly nemesis who has learned how to turn her magic into a weapon. Now in paperback! 1/15 Let’s Go Swimming on Doomsday by … Continued
See More

Let’s face it: the best books are the ones that somehow actually make your heart skip, speed up, and occasionally, you know, stop. They stick with you weeks, months, after, sometimes longer. So, here are six of our favorite tear-jerkers.   1. Someday We Will Fly This one will get you right in the feels because it’s so real. Set … Continued
See More

Books to Save Your Gift Cards For

You’ve opened your gifts and thanked your family, and now it’s time to start planning which books you’ll be adding to your TBR! These winter releases are almost here, and even though your gift cards are burning a hole in your pocket, these beauties are worth the wait.   Song of the Dead by Sarah … Continued
See More
SEE MORE