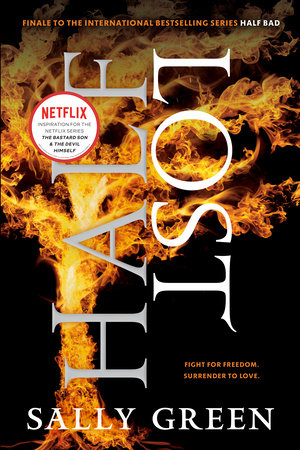 In the year that my father turned twenty-eight he killed thirty-two people. Celia used to make me learn facts about Marcus. That’s one of them. It was the most he killed in anyone year before the war between Soul’s Council and the Alliance of Free Witches. I used to think that thirty-two was a lot.

In the year Marcus turned seventeen, the year of his Giving, he killed just four people. I’m still only seventeen. Before the Battle of Bialowieza—the day my father died, the day almost half of the Alliance died, the day now referred to as “BB” by anyone who dares refer to it at all—anyway, before that day I’d killed twenty-three people.

BB was months ago and now I’ve passed fifty kills.

It’s important to be precise about these things. I don’t include Pilot—she was dying anyway—and Sameen isn’t in the count. What I did for her was a mercy. The Hunters killed Sameen. Shot her in the back as we fled from the battle. And Marcus? I definitely don’t include him in the fifty-two. I didn’t kill him. She killed him.

Her name makes me want to spew. Everything about her makes me want to spew: her blonde hair, her blue eyes, her golden skin. Everything about her is disgusting, false. She said she loved me. And I said I loved her but I meant it. I did love her. What a stupid idiot! Falling for her, an O’Brien. She said I was her hero, her prince and, like the dumb, thick mug that I am, I wanted to believe her. I did believe her.

I’ve killed fifty-two people. But really all I want is to get my hands on her. I’d be happy with fifty-three. Just one more and I’ll be satisfied.

The magical, stunning conclusion to the internationally acclaimed Half Bad trilogy.

“An enthralling fantasy in the Harry Potter tradition.”–Time Magazine on Half Bad

The Alliance is losing. Their most critical weapon, seventeen-year-old witch Nathan Brynn, has killed fifty-two people, and yet he’s no closer to ending the tyrannical, abusive rule of the Council of White Witches in England. Nor is Nathan any closer to his personal goal: getting revenge on Annalise, the girl he once loved, before she committed an unthinkable crime. There is an amulet, protected by the extremely powerful witch Ledger, which could be the tool Nathan needs to save himself and the Alliance. But the amulet is not so easily acquired. And lately Nathan has started to suffer from visions: a vision of a golden moment when he dies, and of an endless line of Hunters, impossible to overcome. Gabriel, his closest companion, encourages Nathan to run away with him, to start a peaceful life together. But even Gabriel’s love may not be enough to save Nathan from this war, or from the person he has become.

Set in modern-day Europe, the final book in the Half Bad trilogy is more than a story about witches. It’s a heart-poundingly visceral look at survival and exploitation, the nature of good and evil, and the risks we take for love.

Every once in a while, we all need a good cry. Pent-up emotions need to be released, and any reader will tell you that the best way to open up the floodgates is with the perfect book. From the silent sob to the ugly cry, readers are no stranger to crying because of a really … Continued
See More

7 Reasons the Half Bad Trilogy is What Your Heart Needs

All three books in the Half Bad trilogy are out in paperback as of this week, and you know what that means: if you haven’t started this series yet, now is the perfect time. Set in a modern-day England where witches live alongside humans, Half Bad follows sixteen-year-old Nathan, who is caught between two warring factions of witches … Continued
See More

Place candy corn in bowl. Load horror flicks in DVD player. Queue the Monster Mash. And last but not least – ensure that your bookshelf is stocked with the perfect Halloween books to carry you all month long on a Halloween high to October 31st. These wicked reads have the creep factor, ghoulish romances, and deadly secrets … Continued
See More

Start Reading the Half Bad Series!

We’re in the business of bringing you unique, unforgettable stories that you won’t soon forget. That’s why we’re introducing you to Half Bad by Sally Green, a (complete!) fantasy trilogy that you won’t want to miss. Set in modern-day Europe, the Half Bad series is more than just a story about witches–it’s a heart-poundingly visceral look … Continued
See More

We’re slowly but surely making our way to spring and we’re looking forward to walking in the park, smelling flowers blooming, and…reading outside! Duh. We’ve got a fantastic lineup of books coming out in March so that as soon as the weather hits 65 you can be lying on a blanket somewhere reading away. Happy … Continued
See More
SEE MORE