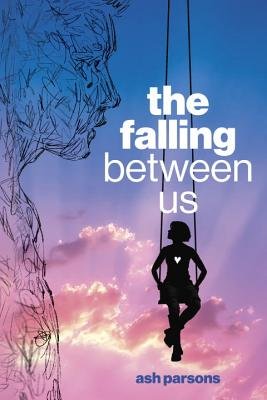 The Falling Between Us

The arena is almost dark, the crowd’s frantic shrieks louder now, managed by light cues. I stand in the dimness at the side of the stage, holding hands with Joshua. Peering past him and the curtain, a spinning, giddy joy fills me again as I see them, hear them, feel them.

The crowd. Moving in the dark, waiting, screaming his name.

“Is this real?” Joshua’s voice is a low rumble. The skin under my ear tightens and pulls, almost as if wanting to yank my neck under his lips and press there.
I smile and steal a glance at him. In the dark his changeable hazel-green eyes are mostly pupil, fringed with lashes as dark as his shoulder-length hair, glossy as a raven’s wing.

My voice is caught as I look at him. Is this real? I don’t know anymore. They scream for this boy I’ve known my whole life. Now he’s fifteen, nearly sixteen, and famous around the world.

I spot Ty, Joshua’s little brother, in the front row. He’s beaming pride, a thirteen-year-old trying to act older and cooler. His smile is a spotlight aimed at the stage.

Just eight months ago, we were all in tiny Marchant, Georgia. The only constant from then is the music. From the day I first met him, Joshua has always written songs. He used to lug around a thrift-shop guitar that was too big for him. He’d play for anyone who’d listen.

Now over twenty thousand people fill one of the most famous arenas in the world, waiting to hear him perform.

It’s the opening night of his first tour.

The lights flick up and out, shooting across the arena before dimming. The massive screen above the stage starts to play footage of Joshua—behind the scenes, rehearsing, recording, all the while effortlessly smiling for the cameras.

As the band takes their places, silhouettes just visible to the crowd, a roar erupts. It’s a sound I’ve never heard before.

“Birdies” the female fans were dubbed by a blogger, and the name stuck.

Beside the stage, Joshua squeezes my hand before let­ting go. His hands come up and push back my razor-cut bright red hair. He kisses me, once.

Then he’s gone. Onto the stage. Into their screams of love.

As Joshua moves onto the stage in the near dark, the pitch and timbre of the screaming increases. Joshua’s hands rattle against his legs with nerves as Quinn, the lead guitarist, lifts the strap of Joshua’s guitar and helps place it over his shoulder.

I still have to do a double take at the makeover trans­formation, remembering the Joshua of Marchant: the blunt haircut that Ty or I would give him, Joshua standing on the weathered wooden deck in front of their trailer as I snipped kitchen scissors in a nearly straight line along the tops of his shoulders.

Now his long hair is cut into layers and is perfectly tousled, and there’s a stylist who travels with him to make sure it stays just so.

In Marchant he wore plain jeans and whatever cheap, wrinkled T-shirt he picked up off their shared bedroom floor.

Now he wears a sleek black-and-silver costume—tight pants with sneakers, a T-shirt, and a fitted jacket with accents on the back and arms that glint like dark chrome wing bones under the lights.

In Marchant he was my boyfriend. The boy next door who lived three trailers down from me.

Now he’s everyone’s imaginary boyfriend, an interna­tional star. It started with a handheld YouTube video that’s been viewed over three million times. His debut album, which came out just three months later, went double plati­num, exploding like a rocket. “Number one with a bullet,” his agent had said.

And here he is onstage, headlining his first tour.

In the near dark, you can feel the restlessness of the crowd. Expectation thrums in palpable waves. The glow of small screens, turned on and held up to thousands upon thousands of faces, aimed at the stage, each a pinpointed moment, a person, each a singular whole other world out there in the dark, twinkling together like a constellation.

“You did it, Shu,” I say in a whisper. Onstage, Joshua turns to me as though he heard somehow and flashes me the smile I’ve known forever, the one that still makes my stomach clench with butterflies.

The stage lights flash on and sweep down, like the illumination of an angel descending.

I didn’t think it was possible, but the cheering grows louder, crests like a wave, ricocheting around the cavern of the arena, searching for Joshua Blackbird.

The audience has one voice, and it crashes into us, a shriek of anticipation and desire.

The drummer, Speed, counts in with his drumsticks. Lights flash around him, backlighting the loose coils of his short Afro.

The drumbeat and a guitar start together.

The stage is awash with golden light, bright as an unending fall of stars. The scale of the room is unbeliev­able, the stage massive and yet swallowed by the space beyond it.

The distinctive chords of Joshua’s first hit echo out, and the crowd starts bouncing—trying to dance in front of their seats, bodies and voices calling.

Joshua joins them, jumping in place easily, steadying his guitar with one hand, pumping his other arm in the air in time with the music.

Speed intensifies the beat, and then the familiar synth notes rise like bubbles, the hook in them so catchy I can’t help but join in the dancing.

Even though I’ve heard this song a thousand times.

Dancers enter the stage, crossing the front, all silver flash and gyrations, forming a shifting shield in front of Joshua. They glide forward, keeping him nestled behind their bodies.

The immense screen over the stage both teases and reveals the object the Birdies all scream for as he moves closer to them.

Then the dancers part and Joshua steps to the edge of the stage. Hands reach for him, fingers hungry, camera phones glowing and devouring.

An enormous black-feathered bird crouches on the screen above. Then the raven lunges upward, opening ink-dark wings, a glare of light accentuating dark edges as it rises, wings sweeping wide.

About The Falling Between Us

All-consuming fame and fortune prove too much for a teen popstar who suddenly goes missing–Eddie and the Cruisers for the Justin Bieber era.

“An uplifting story of love, grief, and forgiveness.”–Kirkus Reviews

Just eight months ago, fifteen-year-old Roxanne Stewart was stuck in her tiny, middle-of-nowhere hometown with no prospects of leaving. But after her boyfriend, Joshua Blackbird, posts a performance of an original song on YouTube, he becomes an overnight sensation, catapulting to the dizzying heights of celebrity, and Rox joins him on the whirlwind ride of a massive national tour.

But it’s not long before the never-blinking eye of fame begins weighing them both down–the constant hunger of managers, diehard fans who call themselves “Birdies,” record execs, paparazzi, and even family, all leeching onto Joshua.

Then one day, Joshua Blackbird disappears. Was it a suicide? An accident? Rox will stop at nothing to find out the truth. The Falling Between Us is a haunting love story and a piercing look at the costs of fame.

Praise for The Falling Between Us

Spring is upon us, which means one very important thing: it’s music festival season! If you’re feeling the end of Coachella even harder this year (#Beychella and that Destiny’s Child reunion, anyone?) or can’t wait for Governors Ball or Bonnaroo, we have a list of the perfect reads to tide you over until your next … Continued
See More

Every Book Hitting Shelves in March 2018

Ah, March. Flowers blooming, temperatures rising, and books stacking up! We have SO many great reads this month–from series enders, to tear-jerking standalones, to anniversaries of beloved novels, we’ve truly got it all for you this month!   3/6: Hero at the Fall by Alwyn Hamilton: Rebel of the Sands fans, rejoice! The breathless finale to the … Continued
See More

Circus Stars from Yesteryear and Celebrities of Today

Ash Parsons is the author of The Falling Between Us, a haunting love story and a piercing look at the costs of fame. In the novel, there are comparisons between circus star life and the celebrities of today, so author Ash Parsons has written us three profiles!!   Part One:  Tom & Lavina In my book The Falling … Continued
See More
SEE MORE