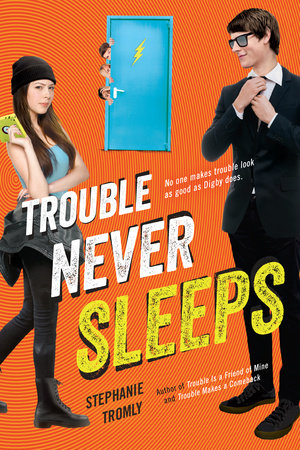 “So this is what closure feels like,” Digby says.

We’re standing on the grassy patch where his little sister, Sally, was buried nine years ago.

He isn’t asking for suggestions. He is telling me something I already know. The search for the truth about what happened to his sister after her kidnapping had been the basis of so many of our arguments, so much of the hurt we’d dealt other people, all the times we’d broken the law, all the times we’d broken our bodies. I’d gone along because . . . Digby. He needed to find Sally. But now, for the first time in a long time, Digby doesn’t have an angle to play. He doesn’t have his next move planned.

“What did I expect, right? It’s like they say. The truth is almost always disappointing.” Digby turns to me. “But . . . now what? Other than me, talking in clichés.”

I watch him wrestle with his paralysis and I think about how different my priorities have become since I met Digby eight months ago. I’d first arrived in River Heights wanting nothing more than to make some friends and have some normal high school fun.

And I did that. I made friends. I even had a boyfriend. But I blew all that up because . . . Digby. And now, with a trail of bad blood and narrowly avoided felony charges behind me, I perversely find myself dreading the end of the crazy.

Because it really does look like it is game over. Sally Digby is dead.

I know it’s selfish to wonder, but what does this mean for Digby and me? As a wise woman once said, relationships that start under intense circumstances never last.

“This isn’t the time to think about what’s next,” I say, putting the shovel back in his hand. “Now we keep digging.”

We are about to get going again when a pair of flashlight beams comes out of the main house’s back door and bobs toward us.

“Do we run?” I say. The anguish on Digby’s face makes me wonder if he can survive a late-in-the-game plot twist.

But, as usual, I’m starting at the end.

So here it is. One last time, from the top. Meaning, we have to go back to the night of Kyle Mesmer’s lake house party.

Happily Ever After gets a serious makeover in this swoony, non-stop, thrill-ride of a conclusion to the Trouble Is a Friend of Mine trilogy

Digby and Zoe have been skirting around each other for so long that you might think they’d lose their magic if they ever actually hooked up. But never fear–there’s all the acerbic wit, steamy chemistry, and sarcastic banter you could possibly hope for.

Now that Digby’s back in town with a new lead, he’s plunged Zoe (and their Scooby Gang of wealthy frenemy Sloane, nerd-tastic genius Felix, and aw-shucks-handsome Henry) into the deep end on the hunt for his kidnapped sister. Sure, it could require breaking into a government research facility (not to mention a little light treason), and yes, Zoe could be jeopardizing her Ivy League future. But dating Digby was never going to be short on danger, and it’s worth it if it helps him get the closure he so desperately needs. The schemes might be over-the-top but this Breakfast Club cast is irresistibly real as they cope with regular high school stuff from social media shaming to dating your best friend, all with a twist no one will see coming.

“I’m in awe of Tromly because of what she has pulled off. . . this book sings.”–Jesse Andrews, author of Me and Earl and the Dying Girl and The Haters on Trouble Is a Friend of Mine

Dear April, we would just like to say thank you thank you thank you for all the new books.   4/2: Life Sucks by Michael Bennett and Sarah Bennet – A book for teens that shows readers that we all deal with crap in our lives and how to laugh at some of the things we … Continued
See More

Let Us Tell You About TROUBLE IS A FRIEND OF MINE

There are books you love and then there are books that you NEED EVERYBODY ELSE TO READ IMMEDIATELY. The books that you try to work into conversations during parties or press into people’s hands before they can finish saying “What should I read next?”   For us, Trouble is a Friend of Mine is one … Continued
See More

Romances We Can’t Wait to Continue This Year

This year is looking good already because we can FINALLY continue some of our favorite romances. From Amani and Jin to Hideo and Emika, we can wait to see what’s in store for our favorite literary lovebirds.   Alex and Eliza: A Love Story by Melissa de la Cruz If you’ve seen Hamilton (or listened to … Continued
See More

April showers bring…new books! We have a small but mighty list coming at you this April, with highly-anticipated sequels, books that are new in paperback, and…Gudetama’s Guide to Life, which is truly hard to put in any category! Read on and build that TBR!   4/3: Folded Notes from High School by Matt Boren: A status-obsessed senior … Continued
See More

If 2017 was the year of the woman, in 2018 women are keeping that momentum going and taking the world by storm. If the Golden Globes were any indication, women are finally (and rightfully) demanding to have their voices heard. And while we continue to show support from a social and political standpoint, we are also making … Continued
See More
SEE MORE