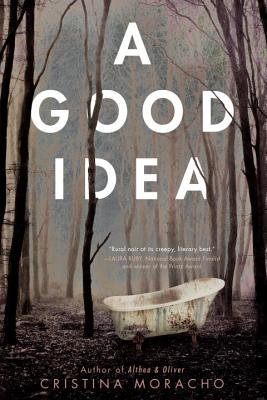 I think it started with the seizure. Serena and I talked about it later, and she agreed that if Ann Russo hadn’t had an epilep­tic fit during the graduation ceremony, she would have been far less likely to contribute her own outburst to the proceedings. Something about the sight of Ann spasming on the ground, red hair gleaming against the aggressively green, meticulously man­icured grass of the backfield, mouth opening and closing word­lessly like a fish, gave what had been until then an unnoteworthy ceremony—the valedictorian’s relentless optimism about the future, the hungover graduates’ heads dipping as they nodded off, their mortarboards shielding their eyes from the morning sun—a surreal quality that sent things firmly off the rails.

The students sitting around Ann called for help. The princi­pal unwisely tried to continue with his speech until he was si­lenced by the crowd—“Shut up, man, we need a doctor”—and an uncomfortable, expectant hush fell over the entire field. In an instant, the pretense to which everyone had been clinging, that there was nothing unusual about this day, this ceremony, vanished, as if Betty herself had found a way to reach down from wherever she was. Take that, motherfuckers. Suddenly we were in a David Lynch movie. Suddenly anything could happen.

It was a crushingly bright morning, swimming-pool-blue sky and the sun an orange blaze steadily making its way to its zenith. The fog had burned off by nine a.m., and the breeze from the At­lantic carried with it a salty mist that reminded me of the ubiq­uitous lobster rolls of my childhood. Above the stage, a banner congratulating the class of 1998 snapped with the occasional gust.

I was sitting all the way in the back, behind the families of the graduates, barely able to see the podium where the principal stood, fiddling with his cuff links as he awkwardly waited for Ann to be removed so he could continue with his speech. If Betty had still been alive, I would have taken a seat right in front, next to her parents, ready to whoop my approval when she finally crossed the stage to accept her diploma. But Betty was dead, and instead I was waiting to see if there would be any mention of her at all. I was waiting to see what would happen when her murderer’s name was finally called. So maybe the ceremony was already somewhat surreal before Ann Russo collapsed, even if Serena and I were the only ones who noticed. And I didn’t even know Serena yet.

I was wired and anxious; I hadn’t slept much the night be­fore, then overcompensated with too much coffee on an empty stomach, and Ann’s seizure did something to me, physically, the shock of it flooding my system with a large dose of adrenaline I definitely didn’t need. Perspiration dampened the armpits of my T-shirt, and I had to press on my thigh with the heel of my hand to keep my leg from bouncing up and down. The other hand I held over my heart, like I was saying the Pledge of Allegiance, and I was alarmed by how rapidly it was firing inside my chest.

After the principal was finally able to finish his speech, it was time to start handing out the diplomas. I leaned forward, the hinges of my plastic chair protesting beneath me, thinking that surely when they got to Betty’s name in the alphabet they would at least acknowledge her. I held my breath when they got to the Fs—“Brian Farmington, Melissa Ferris . . .”—thinking, Here it comes, here’s where they’ll stop the ceremony and say something, and when they got to George Flattery I half rose out of my chair, my whole body clenched and expectant—say her name, say her name, say her name—but there was no mention of Elizabeth Flynn, and then the principal moved on to the Gs and I was sinking back into my seat, eyes stinging, hands fisted at my sides.

I went to stand under a tree, where I could chain-smoke through the rest of the ceremony.

If I was outraged that they hadn’t mentioned Betty, if Ann’s seizure had given me a full panic attack, it was Calder’s walk across the stage that truly brought on the complete out-of-body experience. He looked exactly the same as the boy I had known, back when he was Betty’s boyfriend, not her murderer. Two years ago the three of us had spent an entire summer together, taking his two Labrador retrievers to run on the beach, picnick­ing in the woods on a scratchy flannel blanket, Betty’s head on his stomach, my head on hers, while he read to us from The Od­yssey and Roald Dahl.

I hadn’t been jealous when they’d started dating, hadn’t resented sharing my closest friend in Williston; if anything, I was relieved there was someone else Betty could call when one of her black moods descended like an unexpected summer thunderstorm. The unlights, she called them, and while Calder did not have my years of practice at coaching her through their frequent visits, he seemed to have been gifted with a natural, boundless patience that made him an ideal match for someone who could be, frankly, exhausting. Still, I was suspicious of how much he seemed to relish her damage, his wide-eyed eagerness to swoop in when even the slightest hint of a shadow crossed her face—exactly the kind of behavior I knew would just encourage her—but if anything, I feared that Betty, master of self-sabotage, would get bored and break his heart. Which she did. And I guess his patience ran out after all.

He had drowned her in the shallows of a rocky beach, held her head under the frigid Maine waters while her blonde hair floated like seaweed or the tentacles of a jellyfish. Or that’s how I pictured it. I had imagined it a million times that winter—her hands pulling at his wrists, heels kicking feebly, her muscles clenching and lungs aching, shuddering violently as the cold seeped into her bones. He had killed her at night; the scene I envisioned was lit only by the moon. I would lie in bed and hold my breath, timing myself, wondering how long she lasted until she gave up and let the water in. And afterward, the stillness.

Tall and rangy, fair-haired, he strode across the stage like he had never held someone underwater until her lungs filled with the ocean and her brain shut down and her heart stopped beat­ing. The principal gave him his diploma as if he were any other student, resting a hand briefly on his shoulder as if Calder were in need of moral support. I ground my cigarette butt into the dirt.

About A Good Idea

A taut, dark thriller from the author of Althea & Oliver.

Finley and Betty’s close friendship survived Fin’s ninth-grade move from their coastal Maine town to Manhattan. Calls, letters, and summer visits continued to bind them together, and in the fall of their senior year, they both applied to NYU, planning to reunite for good as roommates.

Then Betty disappears. Her ex-boyfriend Calder admits to drowning her, but his confession is thrown out, and soon the entire town believes he was coerced and Betty has simply run away. Fin knows the truth, and she returns to Williston for one final summer, determined to get justice for her friend, even if it means putting her loved ones—and herself—at risk.

How much is she willing to damage to get her revenge and learn the truth about Betty’s disappearance, which is more complicated than she ever imagined—and infinitely more devastating?

“Sharp as a fistful of broken glass, dark and twisted as the woods at night, A Good Idea is rural noir at its creepy, literary best.” —Laura Ruby, National Book Award Finalist and Printz-winning author of Bone Gap

“A chilling mystery set in the ’90s that errs on the side of noir, this story will leave you captivated and intrigued.” —Buzzfeed

Right now we’re loving Cristina Moracho’s A Good Idea, a suspenseful mystery that will keep you turning the pages late into the night. But that’s not the only reason we can’t stop talking about this book–it’s also a heartbreaking tale of friendship, secrets, and the quest for revenge. We’re giving you five of our favorite … Continued
See More

Watch Cristina Moracho, author of A Good Idea, share the one thing she wishes she knew when she was a teenager.         Get your copy of A Good Idea!
See More

7 Books That Will Give You an Adrenaline Overdose

Spring allegedly is coming, but we haven’t been so sure that yet another snow storm may interrupt. We get it, it’s hard to be cooped up inside for so long. To help you out, we’ve compiled a list of our favorite adrenaline-boosting books to snap you out of it. Hello, fight-or-flight!   People Like Us by … Continued
See More

Every Book Going On Sale in February 2017!

February is the shortest month, but that doesn’t mean there should be a shortage of great reads! This February, we’ve got a killer lineup of fire reads to help you push through the winter. From female gladiators to murder-mysteries to Shakespeare-retellings, we have really got you covered.   2/7: Empress of a Thousand Skies by … Continued
See More

Remember learning about foreshadowing in high school English? Sometimes all it takes is one sentence to set the tone for an entire story. We rounded up 11 books with utterly chills-inducing and powerful first lines that grab you on the very first page and don’t let go for the entire rest of the story. Snuggle up safe and sound … Continued
See More

14 Books We Can’t Wait to Read This Spring!

The colder months are upon us, and we know that once the holiday magic is gone we are going to be so. over. it. Winter is great because it gives us an excuse to stay in and read (do we ever really need an excuse though?), but spring?! When the grass gets greener and the … Continued
See More
SEE MORE