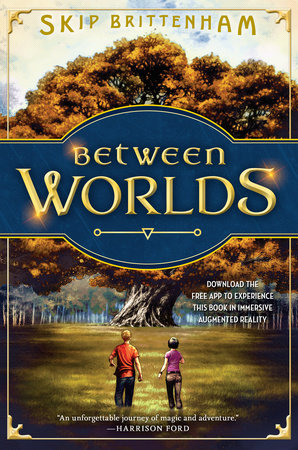 Mayberry and Marshall have heard the stories about the Wishing Tree, but they know nothing like that could really exist near their dreary town. Misunderstood and restless, the teenagers wish for a lot of things, including being on another planet altogether. Somewhere with magic and adventure—someplace where they can be heroes.

And then the unlikeliest thing happens: On a hike through the forest, they find the Wishing Tree. The pair make their wish, fall asleep . . . and wake up on Nith, a world that is exactly what they asked for. The alien landscape is beautiful, but it’s also full of dangerous and fantastic creatures, and almost without exception, the creatures are hungry. Soon Mayberry and Marshall learn two very important facts about their wish: First, that magic comes at a very steep cost; second, that they can only be heroes if they can survive. The journey that follows will test the limits of their courage and strength . . . and change them in ways they haven’t begun to imagine.

This epic work brings fantasy to life, first by inviting readers into another world, then by using cutting-edge augmented reality technology to bring the world alive in interactive 3D.
Experience BETWEEN WORLDS in Augmented Reality now: http://www.experienceanomaly.com/between-worlds/demo

See the exclusive cover reveal for BETWEEN WORLDS by Skip Brittenham

Have you ever wished you could just fall into your favorite book? Well with Between Worlds by Skip Brittenham, an action-packed new YA coming this fall, you’ll be closer than ever! We are psyched to reveal the cover of this incredible novel which features Augmented Reality, allowing readers to interact with the illustrations in the book … Continued
See More

14 Books We Can’t Wait to Read This Fall

August is here! We have good news and bad news. Bad news: we’re quickly approaching the end of summer. Good news: you’ve got a ton of brand new fall books coming your way! Why not soothe your soon-to-be end of summer blues with some of these fabulous reads?   Spontaneous by Aaron Starmer What do you … Continued
See More

Like the rest of the Muggle world, we’ll never lose our love for Harry Potter (anyone else re-read it every summer?). Our other great love is, of course, YA books. So we got to thinking—which YA books would we recommend to Harry, Ron, Hermione, and the rest of our favorite characters from the series?   … Continued
See More

Some of the greatest joys in life come from blending two awesome things into one even MORE awesome thing—peanut butter and chocolate, Arnold Palmers, high-low dresses (at a certain point in fashion history….). So we shouldn’t be surprised that the same holds true for book genres! Whether you’re primarily a fan of contemporary novels or … Continued
See More
SEE MORE