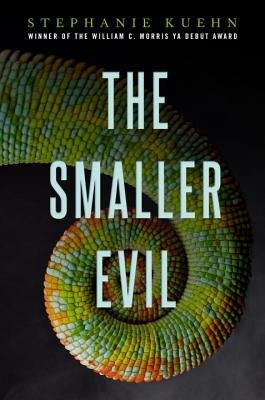 An Excerpt from The Smaller Evil

“You have to stop hurting yourself,” Beau said softly.

“I mean it. You’ve been taught to turn your pain inward. But that’s wrong. It’s sick. Do you understand me?”

“No!” Beau hissed. “That’s your whole damn problem, thinking. Ever since the day we met, you’ve told me what you think about things. But you don’t feel and you don’t do. Not in any meaningful way. Feeling and doing, they’re more important than the thoughts inside your head. They’re our primary channels to health. To immunity.”

“Huh?” Arman shivered. He couldn’t even pretend to comprehend what was going on.

Beau sighed. “Do you take care of yourself by thinking about exercising? Or by actually exercising?”

“And does thinking about, say, sex keep you from wanting it? Or do you find you’re driven to satisfy your desires in more physical ways?”

At this, a great roar of laughter rose up behind him, and Arman longed to melt. Or evaporate. Did everyone know about him and the cook? That’s what it felt like. But he managed to answer, “I . . . satisfy my desires.”

“That’s right.” A look of approval crossed Beau’s face, and seeing this calmed Arman. It reassured him that he was saying the right things and doing what was expected of him. It also gave him hope this ordeal would soon be over. He watched eagerly as Beau rolled his own shirtsleeves up, exposing the smooth skin of his forearms. Then Beau pulled something from the side pocket of his pants. He worked hard to pry whatever it was open before dropping it right in the center of Arman’s palm.

Gasps came from the surrounding circle, and Arman stared, disbelieving. It was a knife. Beau had given him a pocketknife. A strange-looking one, with a rosewood handle and an ornate type of blade Arman had never seen before. Rather than a solid steel color, this blade was a dramatic mix of light and dark, of everything in between. Streaks of grays and blacks covered the entire surface—a gleaming feat of metallurgy that worked to form a distinctive pattern of whorls and loops. Like a fingerprint.

“My grandfather made it,” Beau said. “It’s a Damascus. Truly one of a kind.”

Arman said nothing. He just kept staring at the blade.

Then he looked at Beau’s outstretched, unscarred arms. Like an offering.

Arman swallowed hard. His trembling hand closed around the knife’s hilt. It was heavier than he’d realized, and it was nothing for him to let the weight of the decorative blade tip down to rest against Beau’s soft wrist. He glanced up.

Arman nodded. Held his breath. Then he began pressing down on the blade. Slowly. Very slowly. Until pop! The skin gave. A dot of red appeared. The smallest mark. He quickly looked at Beau again. He wanted approval. He wanted to be told to stop.

“Deeper.” Beau fixed his calm river-pebble gaze on him. “As deep as you can go. To the bone.”

“You said you wanted to heal.”

“Yeah, but not like this. This isn’t healing. It’s gross.”

“Are you sure, Arman? Or is that just what you think?”

Was this really happening? “I’m sure I think it’s true.”

Beau bent forward then, lowering his voice to a whisper, making it a moment just between them. “Maybe the truth is that you don’t know what healing looks like. Maybe nothing you know is as it seems.”

“And why would that be?”

“Because you’re here. Because you can’t see the truth from where you’re standing. Because you’re like a dog chasing a squirrel as it runs around a tree. You don’t realize you could catch the damn thing if you just stood still.”

Thick and heavy, Arman’s nausea had returned to roost. “So what? I’m just supposed to do something I don’t want to do because you think I should?”

“I don’t even know what that means!”

“It means ‘another way must be tried.’”

The thing was Arman didn’t see it that way. The truth of who he was and why was so much more complicated than that. The swipe of a sword at a self-appointed father figure couldn’t begin to bear that burden.

Besides, what Beau was asking him to do, well, it was wrong.

So Arman gripped the knife, as tight as he could, and with a snarl, he flung the weapon out of the circle. It arced high in the night air, spinning end over end, before tumbling over the edge of the ravine to vanish into the blackness.

About The Smaller Evil

17-year-old Arman Dukoff can’t remember life without anxiety and chronic illness when he arrives at an expensive self-help retreat in the remote hills of Big Sur. He’s taken a huge risk—and two-thousand dollars from his meth-head stepfather—for a chance to “evolve,” as Beau, the retreat leader, says.

Beau is complicated. A father figure? A cult leader? A con man? Arman’s not sure, but more than anyone he’s ever met, Beau makes Arman feel something other than what he usually feels—worthless.

The retreat compound is secluded in coastal California mountains among towering redwoods, and when the iron gates close behind him, Arman believes for a moment that he can get better. But the program is a blur of jargon, bizarre rituals, and incomprehensible encounters with a beautiful girl. Arman is certain he’s failing everything. But Beau disagrees; he thinks Arman has a bright future—though he never says at what.

And then, in an instant Arman can’t believe or totally recall, Beau is gone. Suicide? Or murder? Arman was the only witness and now the compound is getting tense. And maybe dangerous.

As the mysteries and paradoxes multiply and the hints become accusations, Arman must rely on the person he’s always trusted the least: himself.

How much can you really trust the main character in the book you’re reading? If your answer is somewhere along the lines of “not much,” you’re in for a wild ride. There’s nothing better than when a book truly shocks you, and who better to take you on this ride than a narrator who’s going to … Continued
See More

You know what they say: west coast, best coast. We can’t buy you a ticket but we can give you an insider’s view with these books set in the Golden State!   We Are Okay by Nina LaCour When Marin leaves sunny San Francisco for the bitter cold of New York City, the warmth of the … Continued
See More

Have you ever felt like a book messed with your mind? That’s the genius of The Smaller Evil: narrated by a boy named Arman, it’s a twisty-turny roller coaster ride in which you’re just as suspicious as he is of the strange events at a self-help retreat in the hills. Here to tell us more about the mind behind … Continued
See More
SEE MORE

@PenguinTeen: "It always ends in blood." Oops. While we were focused on Celine and Bastien, Murder Number Four went down 😳… https://t.co/dcCQKf5DX7

@PenguinTeen: Even as the hunt for the killer deepens, we're still waiting for Celine and Bastien to kiss and the wait is AGONIZI… https://t.co/XgX06KD7di

@PenguinTeen: It's the FINAL WEEK of our #TheBeautifulBeDamned Read-Along! 💀 Join us in reading the last 11 chapters of The Beaut… https://t.co/dVPNZCB0qM