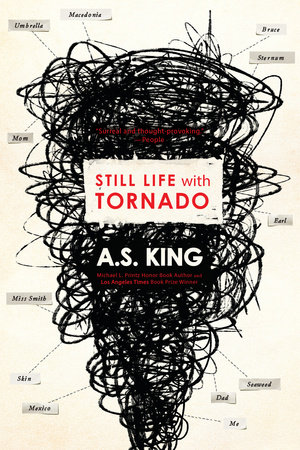 
My art teacher, Miss Smith, once said that there is no such thing as an original idea. We all think we’re having original ideas, but we aren’t. “You’re stuck on repeat. I’m stuck on repeat. We’re all stuck on repeat.” That’s what she said. Then she flipped her hair back over her shoulder like what she said didn’t mean anything and told us to spend the rest of class sorting through all the old broken shit she gets people to donate so we can make art. She held up half of a vinyl record. “Every single thing we think is original is like this. Just pieces of something else.”

Two weeks ago Carmen said she had an original idea, and then she drew a tornado, but tornadoes aren’t original. Tornadoes are so old that the sky made them before we were even here. Carmen said that the sketch was not of a tornado, but everything it contained. All I saw was flying, churning dust. She said there was a car in there. She said a family pet was in there. A wagon wheel. Broken pieces of a house. A quart of milk. Photo albums. A box of stale corn flakes.

All I could see was the funnel and that’s all anyone else could see and Carmen said that we weren’t looking hard enough. She said art wasn’t supposed to be literal. But that doesn’t erase the fact that the drawing was of a tornado and that’s it.

Our next assignment was to sketch a still life. Miss Smith put out three bowls of fruit and told us we could arrange the fruit in any way we wanted. I picked one pear and I stared at it and stared at my drawing pad and I didn’t sketch anything.

I acted calm, like I was just daydreaming, but I was paralyzed. Carmen looked at me and I shrugged like I didn’t care. I couldn’t move my hand. I felt numb. I felt like crying. I felt both of those things. Not always in art class, either.

When I handed in a blank paper at the end of class, I said, “I’ve lost the will to participate.”

The next day Miss Smith said that I should do blind drawings of my hand. Blind drawings are when you draw something without looking at the paper. I drew twelve of them. But then I wondered how many people have done blind drawings of their hands and I figured it must be the most unoriginal thing in the world.

She said, “But it’s your hand. No one else can draw that.”

I told her that nothing ever really happens.

“Nothing ever really happens,” I said.

She said, “That’s probably true.” She didn’t even look up from the papers she was shuffling. Her bared shoulders were already tan and it wasn’t even halfway through April. I stood there staring at her shoulders, thinking about how nothing ever really happens. Lots of stuff has happened to Miss Smith. I knew that.

My hands shook because I couldn’t draw the pear. She looked up and I know she saw me shaking. She could have said anything to me then. Something nice. Something encouraging. Instead, she repeated herself.

So I stopped going to school.


It’s true about the letters they’ll send when you stop going to school. After a week or so they come after you and make you meet with the principal. But that’s happened before, just like tornadoes, so it didn’t impress me. My parents escorted me into the school building and they apologized a hundred times for my behavior but I didn’t apologize even once.

I couldn’t think of one reaction to the meeting with the principal that was original. Apologizing, crying, yelling, spitting, punching, silence—none of those things are original. I tried to levitate. I tried to self-combust like a defective firework.

Now that would be original.

About Still Life With Tornado

A heartbreaking and mindbending story of a talented teenage artist’s awakening to the brokenness of her family from critically acclaimed award-winner A.S. King.

Sixteen-year-old Sarah can’t draw. This is a problem, because as long as she can remember, she has “done the art.” She thinks she’s having an existential crisis. And she might be right; she does keep running into past and future versions of herself as she wanders the urban ruins of Philadelphia. Or maybe she’s finally waking up to the tornado that is her family, the tornado that six years ago sent her once-beloved older brother flying across the country for a reason she can’t quite recall. After decades of staying together “for the kids” and building a family on a foundation of lies and domestic violence, Sarah’s parents have reached the end. Now Sarah must come to grips with years spent sleepwalking in the ruins of their toxic marriage. As Sarah herself often observes, nothing about her pain is remotely original—and yet it still hurts.

Insightful, heartbreaking, and ultimately hopeful, this is a vivid portrait of abuse, survival, resurgence that will linger with readers long after the last page.

“Read this book, whatever your age. You may find it’s the exact shape and size of the hole in your heart.”—The New York Times

★ ”A deeply moving, frank, and compassionate exploration of trauma and resilience, filled to the brim with incisive, grounded wisdom.” —Booklist, starred review

★ ”King writes with the confidence of a tightrope walker working without a net.”—Publishers Weekly, starred review

★ “King’s brilliance, artistry, and originality as an author shine through in this thought-provoking work. […] An unforgettable experience.” SLJ, starred review

Adam & Mia, and 9 Other Artists from YA Books We Love

Isn’t there something just so attractive about an artist? Whether they’re putting paint on a canvas or strumming out their feelings on a guitar, the brooding definitely gets to us in the best possible way. Here at Penguin Teen, we work with books (obviously), so it’s no mystery why we love artists in fiction. Here … Continued
See More

9 Books That Will Help You Find Your Strength

In an ideal world, every day would consist of sunny days spent reading on grassy knolls with not a cloud in sight. But the real world is full of ups and downs, the occasional cloudy day and sometimes straight up thunder and lightning. Luckily, we find that books can be the best way to weather the … Continued
See More

How much can you really trust the main character in the book you’re reading? If your answer is somewhere along the lines of “not much,” you’re in for a wild ride. There’s nothing better than when a book truly shocks you, and who better to take you on this ride than a narrator who’s going to … Continued
See More

Everything You Need to Know About Still Life With Tornado Author A.S. King

Name: A.S. King Novel: Still Life With Tornado Available: October 11, 2016   Who’s your favorite author, living or dead? Kurt Vonnegut Jr.   What’s your favorite thing about your book? When I write a book I never think of the future cover. I have many favorite things about this book on the inside, but … Continued
See More

Ahh, fall. Crisp air, pumpkin spice lattes, and lots and lots of great reads, perfect for curling up by the fire with on those chilly October nights. We’ve got an incredible list of October reads for you, so get ready to add them to your TBR!   10/3: Things I’m Seeing Without You by Peter … Continued
See More

Every once in a while, we all need a good cry. Pent-up emotions need to be released, and any reader will tell you that the best way to open up the floodgates is with the perfect book. From the silent sob to the ugly cry, readers are no stranger to crying because of a really … Continued
See More

Friday Night Lights is leaving Neflix this weekend, much to our dismay. What are Sunday mornings without endlessly bingeing FNL?! To fill the hole in our hearts, we’re giving you 10 books to read based on your favorite characters of Friday Night Lights. Clear eyes, full hearts, can’t lose.   TAMI TAYLOR: Salt to the … Continued
See More

A.S. King Shares 5 Things You Need to Know About Still Life With Tornado!