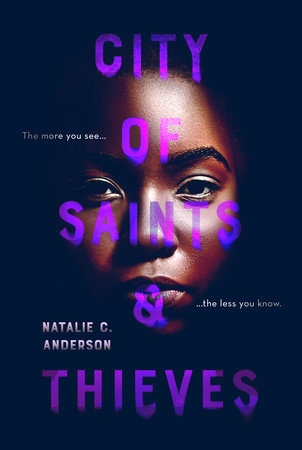 If you’re going to be a thief, the first thing you need to know is that you don’t exist.

Rule 3: Thieves don’t have friends.
Every thief has a mother, and maybe even a little sister if she’s lucky, but you can’t help any of that. You can have people like Boyboy’s mom, who I say hi to every day on my way home. That’s just keeping tabs on the neighborhood. She sells tea on the corner and tells me if cops are around, and I make sure the Goondas go easy on her boy. You can have acquaintances. But friends, people you care about, and who care about you . . .
Well, you’re only going to get them into trouble.
Before you even ask, Boyboy is not my friend.
He’s my business partner. Big difference. He’s from Congo too, so I don’t have to explain certain things to him that I’d rather not talk about, like where my family is, or why I don’t really sleep, or why men in uniforms make me twitch. Sometimes he comes over to my roof and we share a smoke and watch the sun disappear into the smog that caresses the city. That’s it. Boyboy has his party boys, and I have Kiki. You probably think that’s sad or something, but I’m not sad.
Besides, I don’t have a lot of time for making friends. I have things to do.
We use a florist’s van to get there. Ketchup is driving, and Bug Eye keeps yelling at him to slow down and watch the road. It’s two in the morning and cops are just as likely to shake us down for cash as care that we’re running red lights, but still, better that no one remembers seeing a van full of kids dressed in black and obviously not florists. The closer we get, the more ready I am to be out and working. Ketchup’s constant prattle makes me nervous. He laughs his hyena laugh and says gross stuff about the twilight girls on the street corners we pass.
In the back, Boyboy and I are quiet, getting ready. I attach my earpiece and make sure the Bluetooth is connecting to my phone.
“Let’s see how the camera is feeding,” Boyboy says.
I look at him, aiming the micro-camera embedded in the earpiece. His face pops up on his laptop screen. “Good.” He watches himself pat his hair into place as he asks, “Mic check? Say something.”
I whisper, “Boyboy got no fashion sense,” and the little earpiece relays my words to my phone, and then to Boyboy’s computer, where I hear myself echo.
He flips me off seamlessly, between the adjustments he’s making to his equipment. “Can you hear me okay?”
“Yeah,” I say. “You’re clear.”
“You have to keep your phone close to the earpiece. When you had it in your pocket on that last job, the connection was bad. Where are you putting it?”
I tuck my phone into my sports bra and wave my hands—ta-da.
“Cute.”
“Secure.”
“Put this one in your pocket,” he says, and hands me a tiny USB adapter. “It’s the key to the treasure box and I don’t want it getting lost in your cleavage.”
“Ha.” My chest is barely larger than my eleven-year-old sister’s. But I do as he asks.
Boyboy is crazy good with tech stuff. He always has been, ever since I’ve known him. He told me when he was little the bigger boys would beat him up and call him a fairy, so he spent a lot of time in his room, taking phones and computers apart, putting them back together. His latest trick is hacking ATMs so they spit out crisp thousand-shilling notes.
He won’t join the Goondas, but he’ll work with me. He does his IT genius thing when I need him, and in exchange I lift fancy gadgets for him—computers, phones, the occasional designer handbag—whatever he needs. He says he’s the best hacker in East Africa, and from what I’ve seen, he’s telling the truth.
He’d better be. He’s about to break us into the most forti­fied home in the Ring.

The Ring is where you live if you can afford it. Lush, hilly, and green, it sits above Sangui City, peering down its nose at the rest of us. The houses squat on neatly clipped lawns behind fences and flame trees and barbed wire and dogs and ex-military guards with AK-47s. Fleets of Mercedes descend into the city in the mornings carrying the Big Men to work. We call these guys the WaBenzi: the tribe of the Mercedes- Benz. They come in all shapes, sizes, and colors, hail from all over the world, but speak a common language: money. When they return to their mansions in the Ring in the evening, they complain about traffic, drink imported scotch, and fall asleep early on soft cotton sheets. Their wives oversee small armies of servants and get delicate headaches when the African sun is too hot. Their kids play tennis. Their dogs have therapists.
At this time of night, the Ring is quiet except for frogs and insects. It’s rained up here, and the mist is thick. The eerily familiar tree-lined streets we drive are empty. The florist van doesn’t look too out of place. Maybe we have just come from a banquet. A power wedding.
I look out the window. We pass a break in the houses and trees, and I catch a glimpse of the dark Indian Ocean. Sangui: city-state on a hill, port to the world, and a fine bloody place to do business. You do the dirty work down there in town, and the Ring is where you retreat.
I should know. I’ve seen it all up close. I may live down in the dirt now, but once upon a time, a fortress in the Ring was my home.

Rule 4: Choose your target carefully.
Thief
Kauzi
Thegi
Voleur
Mwizi
Thief
It’s a magic word. Full of power.
Just saying it out loud on the street can get somebody killed. I’ve seen it happen. The police are worthless, so folks are disposed to make their own swift justice. And believe me, no one feels sorry for the thief when the dust settles and blood soaks into the ground. Better be sure no one’s raising a finger at you.
So listen up. Choose carefully. Choose the right target. Most of the time that means the easy target. If you’re pick­pocketing, go for the drunks and people having arguments on their mobiles. If you’re robbing a house, make sure it’s the one where they hide the key on the doorjamb. You want to go for bank accounts? Try the old rich lady. Odds are her pass­word is her dog’s name.
There are plenty to choose from. No sense in making it hard on yourself.
But for every rule, there is an exception.
Roland Greyhill’s home isn’t a natural target. His gates are locked and his guard is up. The man makes his living deal­ing with warlords and armies and vast amounts of cash. He knows he’s got enemies. He’s spent years watching his back. He trusts no one. There is nothing easy about him.
But make no mistake: Difficult or not, tonight he is the right target.
We’re getting close. I swallow the jangling feeling in my throat and roll down my window a little. The air is wet and smells like jasmine.
Boyboy is quiet beside me. I know he wants to ask how I’m feeling. Everyone else has been going over the plan all day, but I’ve been thinking about it for years. I’m not sure I would even know how to explain how I feel right now. Like I swallowed a hive of bees? Is that an emotion?
But Boyboy knows better than to ask me dumb questions.
When we’re two houses away, Ketchup turns the lights off and rolls to a stop.
“We’re here, Mr. Omoko,” Bug Eye says into his phone.
The mansion takes up twice the space of any other home on the street. Over the high wall, only the red tile roof is vis­ible. What we can’t see are half a dozen dudes with AK-47s and two German shepherds prowling the grounds. But we know they’re there.
Everyone looks up at the house, dead silent. Even Ketchup.
Bug Eye rubs his hands together. “You ready, Tiny Girl?”
I touch the earpiece. It’s secure. I pop my shoulders and twist my back. It takes everything not to shout, I’m here. I’m doing this. This is my house.
“I’m ready,” I say, and slip out of the van.

About City of Saints & Thieves

The Girl with the Dragon Tattoo meets Gone Girl in this enthralling murder mystery set in Kenya.

In the shadows of Sangui City, there lives a girl who doesn’t exist. After fleeing the Congo as refugees, Tina and her mother arrived in Kenya looking for the chance to build a new life and home. Her mother quickly found work as a maid for a prominent family, headed by Roland Greyhill, one of the city’s most respected business leaders. But Tina soon learns that the Greyhill fortune was made from a life of corruption and crime. So when her mother is found shot to death in Mr. Greyhill’s personal study, she knows exactly who’s behind it.

With revenge always on her mind, Tina spends the next four years surviving on the streets alone, working as a master thief for the Goondas, Sangui City’s local gang. It’s a job for the Goondas that finally brings Tina back to the Greyhill estate, giving her the chance for vengeance she’s been waiting for. But as soon as she steps inside the lavish home, she’s overtaken by the pain of old wounds and the pull of past friendships, setting into motion a dangerous cascade of events that could, at any moment, cost Tina her life. But finally uncovering the incredible truth about who killed her mother—and why—keeps her holding on in this fast-paced nail-biting thriller.

9 Paperbacks to Bring With You on Your Next Vacation

Yes, we recommend you bring all 9. They’re light, right? Read on for 9 books that are newly in paperback–if you missed them the first time around, now’s the perfect moment to grab one (or all, like we said), and pack ’em in your beach bag!   City of Saints and Thieves by Natalie C. Anderson The … Continued
See More
SEE MORE