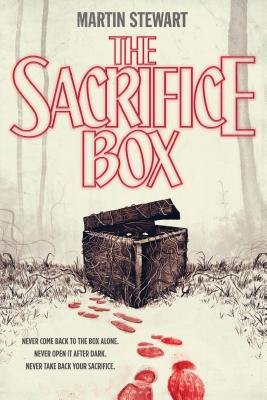 Sep knelt beside the box. The forest was tight with heat, and sweat prickled on his skin.
The clearing around him was a blanket of root and stone, caged by silent trees and speckled by dark, leaf-spinning pools that hid the wriggling things of the soil. And at its heart, as though dropped by an ebbing tide, was the sacrifice box.

Mack was hopping in anticipation behind him. Arkle, Lamb, and Hadley stood on the other side of the box’s stone, their sacrifices complete: a scatter of burned dragonflies, a little mirror, and a diary.

Sep squeezed Barnaby. The little teddy’s plastic snout was fixed in a smile, and his eyes were deep and brown.

“Are you okay?” said Hadley.

“What?” said Sep, turning his good ear toward her.

“It’s all right,” said Hadley, lisping through her braces. Sep could hear the wheeze on the edge of her voice. “You don’t have to.”

“Are you eating another sandwich?” said Arkle. “Pac-Man with legs, you are.”

Sep looked at Barnaby, at the matted fur and the pudgy limbs’ permanent star jump. The teddy was a ruined thing—dragged through briar, thorn, and rain until his tummy split. Sep’s mum had stitched him up with an old shoelace, the summer before she got sick.

As he thumbed the lace, Sep’s good ear hissed with the treetops’ breeze—then the wind died, and there was no sound but the pat and chuckle of the recent sun-shower as it dripped, leaf by leaf, down to the earth.

“Sep!” Arkle hissed again, even though people normally did what Lamb said since her mother died.

Sep sighed and looked up at Arkle’s sweaty grin. “What is it?” he said. The air was green and sticky, and dandelion seeds had stuck to their faces.

“Under your right knee.”

“That’s my left knee,” said Sep, wiping his jeans on the grass.

“Are you putting the bear in or not?” said Lamb.

Sep looked at tall, strong Lamb—shoulders back, her mother’s head scarf tied around the plaster cast on her wrist. She met his stare evenly, and he saw Arkle nod and Hadley smile, the trees behind them split by the recent lightning.

Barnaby had been a gift from his mum. Sep had tucked the bear beside her in the hospital bed, when she was sleeping after the operation—and he’d wondered, on the way home in his granda’s car, whether her dying would mean he’d get to stay on the mainland forever.

He’d never forgotten the way the thought had felt in his head. Hot. And guilty.

He reached out to the box’s cold stone, squeezed Barnaby one last time—then tossed him after the other sacrifices and stepped toward the others.

“Why not?” said Mack, shrugging. “There, I’ve stopped the hands. It’ll always show the time of this perfect moment, when we did this together.”

“It does so matter,” said Sep. “We’re doing this for each other—whatever you put in has to mean something.”

Mack’s dark brows furrowed low as he heaved on the box’s stone lid. Sep looked for Barnaby, but the box was deep, and there was only darkness inside.

He thought about the broken wrist that had kept Lamb from hockey camp; the vacations that had isolated Hadley, Mack, and Arkle from their usual friends; the way they’d bumped into one another on the beach; and how they’d drifted into such perfect happiness over the last couple of weeks.

“You know,” he said, “I’ve loved this summer. I’ve never really had anyone to, I mean—”

The lid slipped. Mack swore and snatched his hand away, gripping his fingers.

“Are you okay?” said Hadley. “Are you bleeding?”

“No, it’s fine.” Mack flexed his fingers and swore again. Then he laughed. “I think it bit me.”

They stood back and looked at the sacrifice box. As the lid darkened in the rain it disappeared into the forest’s skin, seeming like nothing more than a small, turf-sunk boulder. The world smelled bright and fresh and green.

“It’s kind of amazing we found this,” said Lamb.

“It was the storm,” said Sep, twisting his headphones. “The box wasn’t here last week. The rain must have washed it out.”

“How old do you think it is?” said Hadley.

“You’re an idiot,” Lamb muttered, then flicked his ear.

Arkle grinned. “I still think we should’ve made it into a fire pit,” he said, flipping the lid on his lighter up and down.

Sep saw Hadley watching him from under her fringe. Her tormentors, Sonya and Chantelle, had chased her to the forest and along the edge of the ravine, and her eyes were still red. He looked up through the trees at the clouds—great towers of pearl that flattened to anvils on the sky and spread out over the island. The tide crashed onto the rocks, and he thought of his mum listening to the waves through the open window of the living room.

“They’re not really mine,” said Sep, remembering how the words had come to him, like a knife driven into his skull—a waking dream so vivid he’d cried out in the bright sunshine.

“What do you mean?” said Lamb.

“How does that work?” said Arkle.

“Because we’re making a promise to each other.”

“And it’ll be our secret,” said Hadley, gripping her inhaler. “We can’t tell anyone.”

“Oh, I don’t think we should talk about this at school,” said Arkle. “I mean, it is kind of lame.”

The rain started again, cold drops on their hot skin.

“I call not standing next to you, poo-legs,” said Arkle.

They arranged themselves around the box as the rain grew heavier, draping the clearing’s edge in gray sheets and closing them in.

Sep tried to peer through it.

Something was moving in the shadows between the trees. He narrowed his eyes, focused on a shifting speck.

There was a sound like someone whispering—or shouting from far away—and a long moment hung in the clearing. Sep felt his skin crawl as he sensed other figures around the box, their shadows closing in.

Then Hadley said, “Sep?” and the moment lifted, and they were alone again.

Two crows spun through the rain. They settled on a branch high above them, shaking the drops from their feathers and shuffling their feet.

Hadley took his hand in hers and lifted it over the box, joining their palms to the others’. Sep felt how warm her skin was, caught her soft scent on the forest’s breath, and closed his eyes.

Something’s really happening, Sep thought—then Hadley squeezed his hand, and he forgot about everything that wasn’t her.

“Now,” she said. “Before Roxburgh finds us.”

They spoke the words—the rules of the sacrifice.

“Never come to the box alone,” they said, hands unmoving.

“Never open it after dark,” they said, fingers joined together.

“Never take back your sacrifice,” they finished—then let go.

About The Sacrifice Box

A horror story about friendship, growing up, and finding a place in the world: Gremlins meets The Breakfast Club by way of Stephen King and Stranger Things.

In the summer of 1982, five friends discover an ancient stone box hidden deep in the woods. They seal inside of it treasured objects from their childhoods, and they make a vow:

Never come to the box alone.
Never open it after dark.
Never take back your sacrifice.

Four years later, a series of strange and terrifying events begin to unfold: mirrors inexplicably shattering, inanimate beings coming to life, otherworldly crows thirsting for blood. Someone broke the rules of the box, and now everyone has to pay.

But how much are they willing to sacrifice?

Halloween is almost upon us! So if you’re looking for the next read that’s going to have you either buying a nightlight or bidding sleep adieu altogether, read on for 17 books that will keep you up ALL NIGHT. 👻   The Companion by Katie Alender  THIS FAMILY IS NOT ALRIGHT. Prepare to be on the … Continued
See More

There’s only one more month of summer left, and we’ve got every book you’ll want to read before heading back to school this fall! August 2018 is packed with amazing titles you DON’T want to miss. So soak up the last of the summer sun with these fantastic releases and brand new paperbacks!   8/7: … Continued
See More

Looking to fit a few more summer reads in before beach season’s over? Check out every book hitting shelves in August!   8/6: Ziggy, Stardust and Me by James Brandon – In this tender-hearted debut, set against the tumultuous backdrop of life in 1973, when homosexuality is still considered a mental illness, two boys defy all … Continued
See More

Happy Friday the 13th, y’all! We here at Penguin Teen HQ know the value and fun of a good scare, so we love that there have been so many great horror movies out right now–A Quiet Place, Truth or Dare, and The Strangers: Prey at Night, to name few. Already seen them or too scared … Continued
See More

Okay, first of all: STRANGER THINGS SEASON 3 SPOILER ALERT. There are SPOILERS ahead.   Got it? Yes? Okay, here we go.     Hopper deserved better. So did Alexei. Oh, and Billy? We see you too, Billy. Maybe take a moment and cry it out before reading on, but in honor of the (literally) … Continued
See More