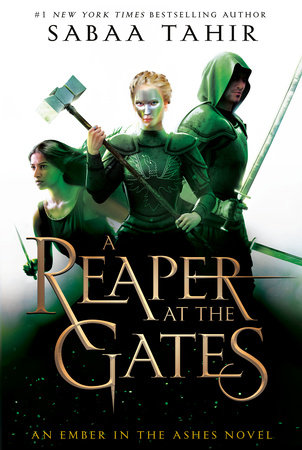 About A Reaper at the Gates

Beyond the Martial Empire and within it, the threat of war looms ever larger.
Helene Aquilla, the Blood Shrike, is desperate to protect her sister’s life and the lives of everyone in the Empire. But she knows that danger lurks on all sides: Emperor Marcus, haunted by his past, grows increasingly unstable and violent, while Keris Veturia, the ruthless Commandant, capitalizes on the Emperor’s volatility to grow her own power–regardless of the carnage she leaves in her path.

Far to the east, Laia of Serra knows the fate of the world lies not in the machinations of the Martial court, but in stopping the Nightbringer. But in the hunt to bring him down, Laia faces unexpected threats from those she hoped would help her, and is drawn into a battle she never thought she’d have to fight.

And in the land between the living and the dead, Elias Veturius has given up his freedom to serve as Soul Catcher. But in doing so, he has vowed himself to an ancient power that demands his complete surrender–even if that means abandoning the woman he loves.

Join us for the Ember Read-Along! From July 5-September 30th, we’ll be exploring the dangerous world of An Ember in the Ashes, A Torch Against the Night, and A Reaper at the Gates by Sabaa Tahir. Whether you’ve read the series twice already or are picking it up for the first time, ALL are welcome to join and catch up … Continued
See More

2018 was a good year for shelves. And, let’s be honest: there’s no way to list all the absolutely iconic characters to grace our pages. So, let’s start with these seven:   1. Emika from Wildcard Because it takes a pretty iconic protagonist to defeat someone taking over the world (especially when you’re IN LOVE … Continued
See More

September is here and new books are too! Here’s what’s hitting shelves this month.   9/1: Sanctuary by Paola Mendoza & Abby Sher – Co-founder of the Women’s March makes her YA debut in a near future dystopian where a young girl and her brother must escape a xenophobic government to find sanctuary.   9/1: FLYY … Continued
See More

Today is Women’s Equality Day, and we’re celebrating with some amazing reads written by amazing women!   Juliet Takes a Breath by Gabby Rivera  This book radiates feminism. When Juliet’s hero fails her, she grapples with crucial, timely questions of what feminism means if it excludes queer and trans women of color, giving language to hard … Continued
See More

So we tested your skills once in this find-the-emoji in the book covers quiz, but can you do it again? Test your skills with the quiz below, then click to flip and see how you did!       They say don’t judge a book by its hidden emoji cover, but…if you were intrigued by … Continued
See More

Month 2 of our #EmberReadAlong is complete! Check out the wrap-up and highlights below! New to the #EmberReadAlong? Click here for more info!   Some of our favorite BookTube + Bookstagram posts! BookTube had lots to say about A Torch Against the Night! Add these videos to your queue once you’re caught up with reading or … Continued
See More

She’s dropped the album, we’ve listened to it on REPEAT, just a few hundred times already and we’re READY: It’s your ultimate Taylor Swift Lover Album YA Book Track Match!   Track 1: I Forgot That You Existed Book Match: If I’m Being Honest Oh Cameron, she’s so blunt that her barbs come off as … Continued
See More

It’s that time of year again! And by that, we mean it’s finally not FREEZING so it’s time to go outside and take BOOK PICS! Speaking of which, we’ve been noticing some killer spring bookstagrammin’ going on so here are a few of our fav spring picks for pics!   If I’m Being Honest by … Continued
See More
SEE MORE