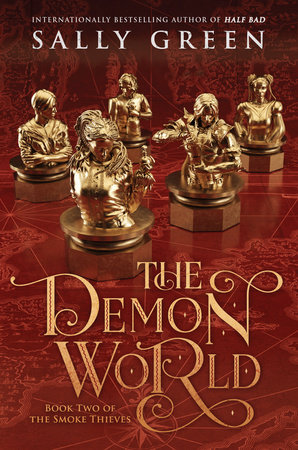 About The Demon World

The epic, magical saga of royalty, romance, and violence continues.

A princess. A soldier. A servant. A demon hunter. A thief. When we last saw them, this unlikely group was heading into the Northern Territory of the kingdom of Pitoria, on the run from the sadistic and power-hungry King Aloysius of Brigant. The Smoke Thieves have discovered that demon smoke is not only an illegal drug used for pleasure, but in fact, when taken by children, demon smoke briefly gives its users super-human strength. Aloysius’ plan is simple and brutal: kill the demons for their smoke, and use that smoke to build an unstoppable army of children to take over Pitoria, Calidor, and then the rest of the world. The Smoke Thieves are the only ones who understand this plan–but can they stop it? Catherine, Aloysius’ daughter, is seen as a traitor from all sides; Tash is heartbroken after the loss of her one friend and sees nothing left for her in the human world; Edyon is wanted for murder; March is carrying the secret of his betrayal of his new love; Ambrose is out for revenge–and all the while, the demons have plans of their own…

Looking to fit a few more summer reads in before beach season’s over? Check out every book hitting shelves in August!   8/6: Ziggy, Stardust and Me by James Brandon – In this tender-hearted debut, set against the tumultuous backdrop of life in 1973, when homosexuality is still considered a mental illness, two boys defy all … Continued
See More
SEE MORE

@PenguinTeen: RT @jennifercarolyn: Five years ago I had an idea I was terrified to write. Three years ago I worked up the courage. Two and a half yea…

@PenguinTeen: Happy #BookBirthday @EmilyHenryWrite! When the Sky Fell on Splendor is now in paperback! https://t.co/pzk7myVpfY

@PenguinTeen: Happy #BookBirthday @Sherri_L_Smith! The Blossom and the Firefly is out today! https://t.co/nMLpV5IeGA

@PenguinTeen: When people suggest waiting to finish your current book before adding more to your TBR https://t.co/F5RR2PeUch

@PenguinTeen: Of course we’re going to be there!!! And the surprises we have planned 💁🏻‍♀️ See ya soon @YALLWEST https://t.co/qfUDBUuren

@PenguinTeen: Watching authors do this NEVER GETS OLD!! https://t.co/20LveJJjNe

@PenguinTeen: Not surprised. At all. https://t.co/CuhbS10rBx