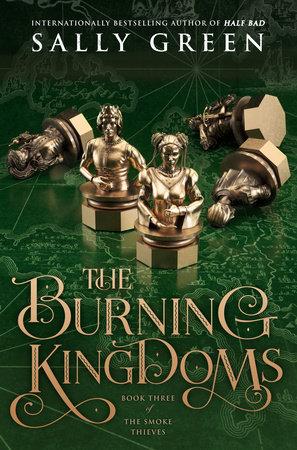 The infirmary was cool in the morning light. The dawn chorus of groans, coughs, and snores had given way  to quiet talk peppered with curses and weak cries for help. Ambrose lay on his side in his rickety camp bed looking  to the door, willing the next person to enter to be Catherine. She would smile at him as she approached, walking quickly, leaving her maids well behind, as she used to do when  she saw him in the stable yard at Brigant Castle. She’d  take his hand, and he’d bend and kiss hers. He’d touch her skin with his lips, breathe on her skin, and breathe in her smell.

The man behind Ambrose coughed wheezily, then spat.

Ambrose had been here a week, sure at first that Catherine would visit him, now not so sure. He’d filled each day with thoughts of her, remembering the days he’d spent with her, from the early days in Brigant, when he rode with her along the beach, to the glorious days in Donnafon, where he’d held her in his arms, caressed her smooth skin, kissed her hand, her fingers, her lips.
A cry of pain came from a man at the far end of the room.

What are you thinking? Catherine shouldn’t come here. The place was full of misery and disease. He had to get out and go to her. But for that, he’d have to walk. He’d been injured in the shoulder and leg in the battle of Hawks Field. He’d seen soldiers heal from worse injuries than his, and he’d seen men give up and die from less serious wounds. There had been a moment, after the battle, when he thought he couldn’t go on, but that feeling of despair had left him, and he knew now he would never give up. He’d fight on for himself and for Catherine.

Ambrose sat up in his bed and began his exercises, slowly bending and straightening his right arm as the doctor had instructed. He moved on to the next exercise: rotating his  bandaged shoulder. This was more painful, and he had to do it slowly.

The battle of Hawks Field was won, but the war was far from over. And as for Ambrose’s part in the battle . . . well, he’d tried to save Catherine, but killing Lang was all he had managed. He’d wanted to fight Boris, but the Brigantines had overpowered Ambrose, and it was Catherine, fueled by demon smoke, who had sent a spear into Boris’s chest. She’d saved Ambrose and killed her own brother. How must it feel? To kill your own brother? It was impossible for Ambrose to imagine; his own brother, Tarquin, had been the complete opposite of Boris. Though now they were both dead. And Ambrose had no idea how Catherine felt about anything. Why hadn’t she come? Was she herself ill? So many questions and no answers at all.

“Shits!” He cried out at a sharp pain as he swung his arm too fast.

He had to get out of this bed. He had to get out of this infirmary! The place was miserable. Every bed had a man in it, but few were casualties from the fighting; most had the fever that had swept through the camp. The red fever, they called it, for the color your face turned as you coughed up your guts. Several more had died in the night, their beds lying empty, though Ambrose knew it would only be a short time before another shivering body was laid in the grubby sheets. It was a miracle he hadn’t caught the fever already.

Ambrose swiveled round until both feet were planted firmly on the floor. With the help of a chair back, he could just stand, wincing and wobbling slightly as he put more weight on his left leg. It was weak, but the pain was bearable; he could walk out of here if he tried. The doctors had removed the arrow from his calf and had sewn him up neatly. Most doctors would have amputated for such an injury, but the doctors had operated carefully, given him herbal treatments, liquors, and compresses.

The best clothes and bedding and . . . everything.

Everything except any word from or about Catherine.

About The Burning Kingdoms

The heart-pounding conclusion to the daring Smoke Thieves trilogy.

In this conclusion to the epic Smoke Thieves trilogy, the world has erupted into all-out war. King Aloysius is mining powerful demon smoke and using it to fuel an unstoppable army of children. March, now banished for treason, has joined up with this boy army. Forbidden from ever seeing Edyon again, and overwhelmed by his own betrayal, March no longer cares if he lives or dies.

Catherine–now queen of Pitoria–must find a way to defeat the boy army, while also grappling with her own troubles: her secret demon smoke addiction, and unresolved tension with her former lover, Ambrose. Catherine seeks military support from Calidor by reaching out to her illegitimate cousin Edyon, who has been proclaimed heir to the Calidorian throne. But Edyon has almost no power as he’s entangled in the unfamiliar machinations and manipulations of the royal court, finding that being the claimed son of a prince may be no easier than being a bastard.

With Catherine, his love, now married off and moving on, and his brother and sister tortured and executed before him, Ambrose doesn’t know what his role in this world is any more. He leads an expedition into the demon world, hoping to destroy the boy army’s stores of demon smoke. In this underground world, he runs into Tash, whom everyone had believed dead. She has survived in this new world using magical abilities that, prior to now, only demons had.

Aloysius will send his demon smoke-powered boy army to kill them all, if he can. But what nobody knows is that there is more to the smoke than meets the eye…

Every Book Hitting Shelves in August!

August is filled with some of our most-anticipated reads, from murder mysteries to sweet love stories. Check out what’s hitting shelves this August below!   8/4: They Wish They Were Us by Jessica Goodman – Gossip Girl meets One of Us Is Lying with a dash of The Secret History in this slick, taut murder mystery set against the backdrop of … Continued
See More
SEE MORE