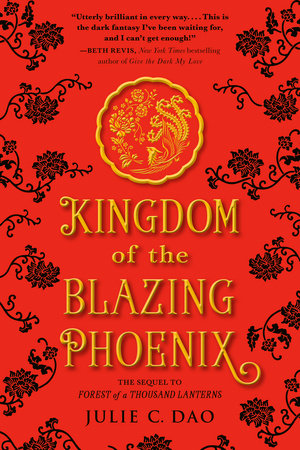 Kingdom of The Blazing Phoenix

The messenger came at dawn, riding up to the gates with a scroll in his hand.

Jade tensed as his looming black-robed figure emerged from the wintry forest mists, thinking at once of the bandits who had tried to attack the monastery three nights ago. They had been hungry and desperate enough to attempt to rob the monks of what little they had, and even after Abbess Lin had chased them away, the women lived in fear that they would return. Jade tightened her grip on her bucket of animal feed, wondering if it would be heavy enough to disarm him so she could sound the alarm.

But her fear turned into curiosity as the man approached. Not only was he by himself, but he rode an elegant black horse and his robes were trimmed with gold.

Auntie Ang hurried past with a lantern in her hand, breath emerging in the frigid air, her glance at Jade both reassuring and apprehensive as she approached him. “May I help you, sir?”

“I have two letters to deliver. One is for the abbess,” he told her in a deep, strident voice, passing the scroll through the gate. “She will know for whom the other is meant.”

The middle-aged monk accepted the missive, her eyes widening at something she saw upon it. “My goodness. This is from . . .”

Jade craned her neck. In the dim lantern light, she could see only a large black circle on the thick roll of paper. There could be nothing shocking in a seal. Abbess Lin had an entire shelf of rusty-red wax sticks in her quarters for correspondence.

But the messenger seemed to understand Auntie Ang’s awe. “See that it is delivered immediately.” As the monk bowed and left, the man caught sight of Jade standing in the shadows and went still. Even his horse held its breath; the little columns of smoke puffing from its nostrils disappeared. Something gold gleamed on his chest, an emblem that looked strangely familiar. It was clear he served someone of great importance.

Jade tried to remember her manners, but couldn’t find her voice and bowed instead. In one fluid motion, the messenger swung off his horse and returned the bow, much more deeply than hers. He wore a black hood that hid all but his eyes. “Princess,” he murmured, before climbing back on his horse and disappearing once more into the trees.

Now, there was a word she knew well.

There was often a princess in the children’s tales Amah still insisted on telling her, even though she was almost eighteen. It was a word meant for old stories and faded texts, a word that belonged to the outside world. It lived in the shaded leaves and branches of the Great Forest. It did not fit into her life, into the rough robes she wore or the sound of the morning’s first gong, waking the monks for prayer and meditation.

Jade pressed her face against the gate, watching the treetops shiver in the icy wind. Everything outside the monastery, from prowling bandits to cold-eyed messengers, seemed like a realm apart she was content to know only through Amah’s fables. She let out a slow sigh, wrapping her fingers around the bars that protected her.

Still, the coming of the messenger and the word he had uttered unnerved her.

It was as though the Great Forest had reached through the gates with branches like eager hands . . . as though that other world had, at last, found her.

About Kingdom of The Blazing Phoenix

This fairy tale retelling lives in a mystical world inspired by the Far East, where the Dragon Lord and the Serpent God battle for control of the earthly realm; it is here that the flawed heroine of Forest of a Thousand Lanterns finally meets her match. An epic fantasy finale to that breathtaking and dazzling story.

Princess Jade has grown up in exile, hidden away in a monastery while her stepmother, the ruthless Xifeng, rules as Empress of Feng Lu. But the empire is in distress and its people are sinking into poverty and despair. Even though Jade doesn’t want the crown, she knows she is the only one who can dethrone the Empress and set the world right. Ready to reclaim her place as rightful heir, Jade embarks on a quest to raise the Dragon Lords and defeat Xifeng and the Serpent God once and for all. But will the same darkness that took Xifeng take Jade, too? Or will she find the strength within to save herself, her friends, and her empire?

Fans of Stealing Snow, Red Queen, and The Wrath and the Dawn will hungrily devour this page-turning read.

Praise for Kingdom of the Blazing Phoenix:

“There aren’t many authors who could so precisely undo their first book with their second, but it is this clever unweaving that shows Dao’s brilliance and skill. With heart-stopping action and wonderful new characters, this is not a sequel to be missed.” —EK Johnston, #1 New York Times bestselling author

“A lush, enchanting tale of magic, myth, and absolute courage. At once gorgeously woven and deliciously gruesome, Kingdom of the Blazing Phoenix is a thrilling end to a series that feels like a classic in its own right.” —Natalie Mae, author of The Kinder Poison

“Kingdom of the Blazing Phoenix is the stunning counterpoint to Forest of a Thousand Lanterns. A refreshing take on the classic heroine, and an adventure of stories nestled within stories, this is a book fairytale lovers will tuck among their most beloved treasures.” —Emily X.R. Pan, New York Times bestselling author of The Astonishing Color of After

“Kingdom of the Blazing Phoenix broke my heart and filled it, all at once. In the process, Julie C. Dao has turned a well-worn tale into something thrilling and new. Ornate, tender, and magical. I could not put this book down.” —Tochi Onyebuchi, author of Beasts Made of Night and Crown of Thunder

“Beautifully written and masterfully told, Kingdom of the Blazing Phoenix feels at once timeless and entirely new . . . I loved it with my whole heart.” —Margaret Rogerson, New York Times bestselling author of An Enchantment of Ravens

“Utterly brilliant in every way, Kingdom of the Blazing Phoenix is the perfect follow-up to Julie C. Dao’s debut. This is the dark fantasy I’ve been waiting for, and I can’t get enough!” —Beth Revis, New York Times bestselling author of Give the Dark My Love

“A grand adventure for fans of fairy tales, fables, and legends coupled with the vibrant history of Chinese dynasties.”—Kirkus Reviews

By Julie C. Dao Picture this: a male anti-hero strutting onto the page, cape billowing, eyes burning, the perfect smolder on his lips as he lies, cheats, and kills. He wins us over with his careless smirk and well-placed sarcasm, and readers are eager to defend him when he performs terrible deeds. “There’s a reason … Continued
See More

Pre-Order goodness! All the amazing THINGS!

There are SOOOO many amazing books still to come in 2018 and if you’re like us, then pre-ordering to get that Day 1 read is must. Of course, we want to reward those organized pre-order peeps out there so for some of our biggest books Penguin Teen has got amazing pre-order goodies just for uploading an … Continued
See More

Everything You Need To Know!   The Fall Into Fantasy Readathon will take place from November 18th – 25th, with the goal of reading at least four fantasy books off your to be read (TBR) pile! Not sure what to read? No worries, we’ve come up with eight reading challenges to help you build your … Continued
See More

Hello, readers! Earlier this year, we brought you a list of series finishing in the first half of 2018, and really, who would we be if we didn’t follow it up with the second half? A small but mighty list, here are the series that are coming to a close in the end of this … Continued
See More

Sometimes it’s easy to think YA books are all light and fluffy. It’s easy to forget that The Outsiders, arguably a YA genre instigator for a lot of the books we know and love today, wasn’t all that light and fluffy at all, and that YA books have been providing windows and mirrors for teens dealing with all … Continued
See More

Every Book Going on Sale in November!

November is a time to be thankful, and in true bookish style the thing we’re most thankful for is NEW BOOKS! Check out the full list below to see all the newest hardcovers, the most anticipated sequels, and beautiful new paperbacks coming your way.   11/6: Kingdom of the Blazing Phoenix by Julie C. Dao – … Continued
See More

It’s been a stellar year for shelves everywhere. Games were hacked, thrones were claimed, and—let’s face it—tears were shed.   And now, it’s time to say goodbye to seven of these beloved series as they take their bows (…and by “say goodbye” we mean re-read obsessively).   Warcross   It’s okay, we all cried too. A … Continued
See More

@PenguinTeen: Happy #BookBirthday @DanielleYUllman! He Must Like You is out today! https://t.co/B5sZQxBZua

@PenguinTeen: @SOaBookworm We honestly can't believe how far she's made it 😬

@PenguinTeen: @SOaBookworm SERIOUSLY THO. She is such a terrible person and we can't take it 🙈

@PenguinTeen: The Commandant is only good at one thing, and that's being a villain 😡 #EmberReadAlong, Chapter XVII

@PenguinTeen: The Trials have begun. If they were only between Elias and Helene, who do you think would win? #EmberReadAlong, Chapter XVI

@PenguinTeen: If you thought the cover reveal excitement was over this week, @roofbeam and @tordotcom are going to blow your mind… https://t.co/0J0FpK1npG

@PenguinTeen: Final (GORGEOUS) cover of the day! The Hazel Wood meets The Astonishing Color of After in this dreamy, atmospheric… https://t.co/d4ZQ6Lou5W

@PenguinTeen: Ready to be spooked? Kara Thomas meets Twin Peaks in this supernatural thriller about one girl’s hunt for the truth… https://t.co/MxzBin222J

@PenguinTeen: Next up, We Were Liars meets Speak in this haunting, mesmerizing psychological thriller. Get ready for a gender-fli… https://t.co/qXuYu9IpYe