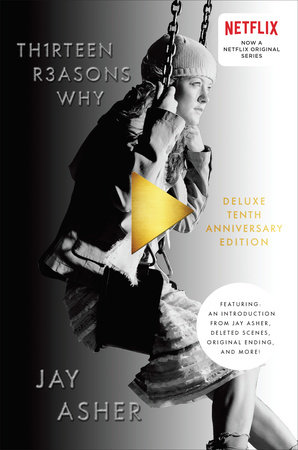 **THE BOOK THAT STARTED IT ALL, NOW A NETFLIX ORIGINAL SERIES**

The #1 New York Times bestseller and modern classic that’s been changing lives for a decade gets a gorgeous revamped cover and never-before-seen additional content, including:
·         An introduction from its award-winning author, Jay Asher;
·         The until-now-secret alternate ending for Hannah and Clay that almost was;
·         Early notes and ideas of how the story came to be;
·         Deleted scenes;
·         And more!

You can’t stop the future.
You can’t rewind the past.
The only way to learn the secret . . . is to press play.

Clay Jensen returns home from school to find a strange package with his name on it lying on his porch. Inside he discovers several cassette tapes recorded by Hannah Baker–his classmate and crush–who committed suicide two weeks earlier. Hannah’s voice tells him that there are thirteen reasons why she decided to end her life. Clay is one of them. If he listens, he’ll find out why.

Clay spends the night crisscrossing his town with Hannah as his guide. He becomes a firsthand witness to Hannah’s pain, and as he follows Hannah’s recorded words throughout his town, what he discovers changes his life forever.

Find out how you can help someone in crisis at bethe1to.com.

Everything Going on Sale in December 2016

This December, we’re bringing you four killer new releases to end 2016 on a great note. Between two fantasy series continuations, a long-awaited anniversary edition, and a debut sci-fi adventure, we’re certain that we’ve got you covered for all of your year-end reading needs.   12/6: Black Moon by Romina Russell: The third book in … Continued
See More

It’s been ten years since we first published Thirteen Reasons Why, and to celebrate we’re releasing a 10th Anniversary edition with exclusive content including the never-before-seen original ending in which Hannah Baker lives.   Got your attention? Need to know more ASAP? So did we! Luckily, we got to ask Jay Asher ten burning questions we had about this momentous … Continued
See More

Romina Russell Sorts the 13 Reasons Why Characters Into Zodiac Houses

Romina Russell, our resident Zodai and master sorter, is just as obsessed with Thirteen Reasons Why as we are. (Stars, they’re just like us!) So, after bingeing the entire Netflix series, she was inspired to sort the characters into Zodiac houses. Read on to see where each character ended up!   House Aries, MILITARY: Marcus Cole, a … Continued
See More

Every once in a while, we all need a good cry. Pent-up emotions need to be released, and any reader will tell you that the best way to open up the floodgates is with the perfect book. From the silent sob to the ugly cry, readers are no stranger to crying because of a really … Continued
See More
SEE MORE