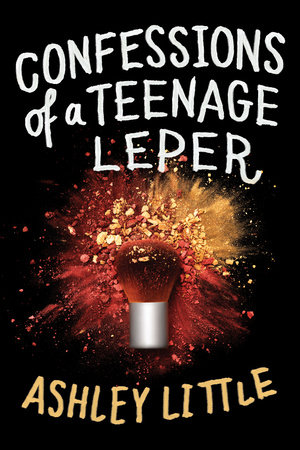 Confessions of a Teenage Leper

They think I got it from an armadillo. Isn’t that the most fucked-up thing you’ve ever heard? I mean, seriously. It’s the twenty-first century. Who gets leprosy anymore? No one. That’s who. Unless you, like, live in a gutter covered in filth or were in the Bible, or unless you’re me. My name is Abby Furlowe. I’m seventeen years old. I live in ------, Texas. I’m blanking out the name of my town because I don’t need some jerk-off coming to find me, getting all up in my face and spray-painting the words DIRTY LEPER across the front of my house. Privacy is important to me now. It didn’t used to be. I used to want to model for Seventeen magazine. I used to want to be an A-list actress and have a beach house in Malibu. I used to fantasize about the paparazzi following me around and me blowing kisses into their cameras, or giving them the finger, depending on my mood that day. When I was a little kid, people would ask me what I wanted to be when I grew up, and I’d say, “I want to be beautiful.” And then they’d laugh and say something cheesy like, “Oh, sweetie. You already are beautiful.” And it was true. I was. I really, really was. And I wasn’t one of those bleach-blonde chicks who thinks she’s so pretty she could maybe be a model one day; I actually was that pretty. And I’m a natural blonde. I was crowned princess of my junior high, I was on the high school cheerleading squad, and I was crowned Miss ------ two years ago. I got to wear a rhinestone tiara and a dress Miss Universe herself would’ve killed for. I stood in the back of a red convertible cruising down Main Street, waving to onlookers at the Fourth of July Parade. You would never think that now, if you saw me today, but it’s true.
I guess the very first thing I noticed was a little reddish spot on my thigh, like a little sunburn patch or something. It was the summer I turned seventeen, and I was a lifeguard at the local pool. No big deal, right? It’ll go away. Just leave it alone, I thought. But it didn’t go away. That’s the thing. That’s the worst thing. It never really went away.
So, anyway. I waited and waited for it to go away and it didn’t, so finally I showed my mom. She ran her fingers over it and poked at it, but it didn’t hurt, and she squinched up her face at me like she does when she’s worried about something but doesn’t want to say what it is. “What?” I said.“Don’t pick at it,” she said.“I haven’t been picking it, Mom!”“Okay.” She nodded. “That’s good.”She put some ointment on it and took me to the doctor the next day.Dr. Jamieson was the doctor who had delivered me. He knew my complete medical history from minute one, even before that, actually, if you want to get technical.He knew about every rash, flu and infection I’d ever had. He didn’t know anything about this red spot though. He thought it was eczema so he gave me a prescription for some cream. So off I went, bought the cream, put it on, blah blah blah. It didn’t work. In fact, I got another little scaly patch on the side of my foot and then one on my face. On my face! Right between my eyebrows. Like, the worst possible spot, obviously. So . . . yeah. I went back to see Dr. Jamieson.

About Confessions of a Teenage Leper

Cheerleading, mean girls, shopping . . . and leprosy? High school is about to get complicated. For fans of Before I Fall and Exit, Pursued By a Bear.

Abby Furlowe has plans. Big plans. She’s hot, she’s popular, she’s a cheerleader and she’s going to break out of her small Texas town and make it big. Fame and fortune, adoration and accolades. It’ll all be hers.

But then she notices some spots on her skin. She writes them off as a rash, but things only get worse. She’s tired all the time, her hands and feet are numb and her face starts to look like day-old pizza. By the time her seventeenth birthday rolls around, she’s tried every cream and medication the doctors have thrown at her, but nothing works. When she falls doing a routine cheerleading stunt and slips into a coma, her mystery illness goes into overdrive and finally gets diagnosed: Hansen’s Disease, aka leprosy.

Abby is sent to a facility to recover and deal with this new reality. Her many misdiagnoses mean that some permanent damage has been done, and all of her plans suddenly come tumbling down. If she can’t even wear high heels anymore, what is the point of living? Cheerleading is out the window, and she might not even make it to prom. PROM!

But it’s during this recovery that Abby has to learn to live with something even more difficult than Hansen’s Disease. She’s becoming aware of who she really was before and what her behavior was doing to others; now she’s on the other side of the fence looking in, and she doesn’t like what she sees. . .

Darkly comic but ultimately touching, Confessions of a Teenage Leper is an ugly duckling tale with a surprising twist.

Confessions of a Teenage Leper