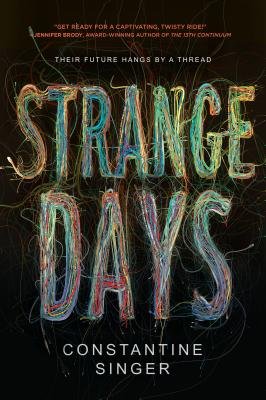 
Two:
Ever since talk about Incursions started, my Tía Juana is the only person I know who’s freaked out by them like me. Even though they haven’t happened in America yet she doesn’t even like me walking home from school—she thinks it’s too dangerous to be outside alone. Her son Alex died before I was born, and because I’m named after him, she takes special care of me.
She messages me right before the end of school saying that she’s coming to get me. I can’t say my message back to her because I’m in class, so I have to unfold my screen to type her a message telling her she shouldn’t because I’m going to hang with Mousie, but she says she’s already here.
My hair falls over my face as I look at the screen in my lap, making it hard to see, so I have to readjust myself and my screen. My aunt says for me to meet her down at Beverly so she doesn’t get stuck in school traffic.
I text Mousie to tell her that I can’t hang, even though I don’t want to.
Meet me later? she sends back.
Where?
The lake
The teacher’s saying something, she’s looking right at me, talking.
I want to text Mousie back, but I can’t because the teacher’s pinned me with her eyes. I’m supposed to be doing something, but I don’t know what, so I lean forward and bring my arm up with my stylus like I’m going to write because that’s what everybody else is doing, but there aren’t even instructions on my desk’s screen and the response window where I’d input my work is grayed out, so I don’t know what I’m supposed to do.
“Mr. Mata? Do you have any thoughts?”
“About what?” It comes out with a laugh that I don’t mean to do, but I can’t stop it.
She sighs, gives me a smile that says she’s tired of me. “Why people voted for Eugene Debs even though he was in prison?”
She’s still staring at me and now my face is getting hot because I can feel everybody else staring at me, too. I think I sort of know the answer. We were just learning about how he was a socialist who wanted the working people to be in charge of things, and how that was what a lot of people wanted.
But I’m not sure I’m right, so I shrug and shake my head.
“No thoughts?”
“Nah.” My screen lights up in my lap. Mousie again.
If I had a Live-Tech pod, I’d be able to message Mousie with my mind and still look like I was working.
My auntie gets me things sometimes. I showed her some stuff about Live-Tech a while ago, but she was totally against it. She doesn’t trust things that play with your mind, and like a lot of people she’s sure Jeffrey Sabazios is out to get us.
Maybe I’ll ask again.
I bring it up when I get in the car. “Jesse’s got Live-Tech.”
My aunt squints at me. She still has a car that you drive, so she’s got her hands on the steering wheel as she pulls away from the curb, moving slow to keep from hitting the other cars picking up kids. “He shouldn’t have that,” she tells me. “Jeffrey Sabazios’s gonna know all his thoughts—even the president says so.”
I shrug. “Sabazios says it’ll protect him from Incursions.”
“That’s crazy, mijo.” She shakes her head like she’s disappointed in my thinking. “He’s using the Incursions to get people to give him their minds, and your mind is something you should never give up to anyone but God. You think it’s coincidence Jeffrey Sabazios ‘comes up’”—she makes air quotes with her hand still on the steering wheel—“with his mind-control stuff right when the Incursions begin and that suddenly it’s going to save you? Use your brain, Alex. He’s conning you. You want to stay safe from the aliens, you stick with me.”
This is hopeless. “Maybe, but it means Jesse never needs to worry about getting his screen jacked.” The Live-Tech pods and their screens only work for the person they’ve been mated with. She knows that. “He won’t have to worry so much walking alone home from school.”
She clucks, shakes her head. “Not about criminals, maybe, but he won’t be any safer from an Incursion no matter what Sabazios says.” She turns to put her eyes on me. “Sabazios is playing people for fools—trying to earn his money off your fear, scaring people into giving him control of their minds.” She bugs her eyes at me. “That’s why no serious people are buying his Live-Tech stuff and why President Castle’s trying to get it banned.” She looks across at me like I’m a baby. “Those are the facts, no matter what you see on your channels.”
I reach up to fiddle with my pod. It’s new, but it’s a little too big for my ear and it hurts after a while, plus the sound pass-thru which they said was going to be 100% isn’t anywhere near that good. “People are buying it,” I say, sounding whiny, which I hate. “Lots of people. It’s already everywhere.”
“It’s not everywhere, and it’s not going to be on in your ear, mijo.”
I don’t really hear her, though. There’s other noise, sounding like a strummed guitar again. “Do you hear that?”
“Hear what?” she asks, eyes fixed on the road.
“That sound, like a guitar?”
She cocks her head, brushes some of the hair away from her ear, listens, then: “You play that thing too much, now you hear it everywhere. I don’t hear anything.”
“Yeah.” I’m not sure I do, either, anymore.

Contemporary fiction with a sci-fi edge, perfect for fans of Ernest Cline and Marie Lu.

Alex Mata doesn’t want to worry about rumors of alien incursions–he’d rather just skate and tag and play guitar. But when he comes home to find an alien has murdered his parents, he’s forced to confront a new reality: aliens are real, his parents are dead, and nobody will believe him if he tells. On the run, Alex finds himself led to the compound of tech guru Jeffrey Sabazios, the only public figure who stands firm in his belief that aliens are coming.

At Sabazios’s invitation, Alex becomes a Witness, one of a special group of teens gifted with an ability that could save the Earth: they can glide through time and witness futures. When a Witness sees a future, that guarantees it will happen the way it’s been seen, making their work humanity’s best hope for stopping the alien threat. Guided by Sabazios, befriended by his fellow time travelers, and maybe even falling in love, Alex starts feeling like the compound is a real home–until a rogue glide shows him the dangerous truth about his new situation.

Now in a race against time, Alex is forced to reevaluate who he can love, who he can trust, and who he needs to leave behind.

Debut author Constantine Singer’s fresh-voiced protagonist leaps off the page in this captivating novel that weaves sci-fi and contemporary fiction.

Trying to see them aliens? Fear not—we have you covered. We’re recommending seven of the best alien-focused YA books to pack for your road trip to Area 51. (Please note, we cannot be held responsible if any books start glowing mysteriously once they’re in your backpack.) When the Sky Fell on Splendor by Emily Henry … Continued
See More

Basically, Strange Days is the contemporary fiction and sci-fi combo we all need in our lives. Alex Mata doesn’t want to worry about rumors of alien incursions–he’d rather just skate and tag and play guitar. But when he comes home to find an alien has murdered his parents, he’s forced to confront a new reality: … Continued
See More
SEE MORE