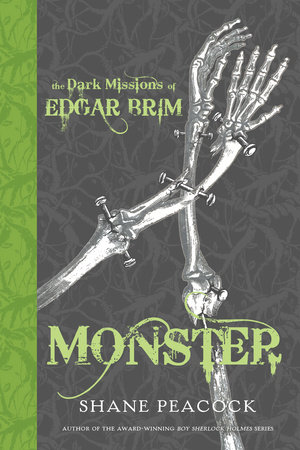 Edgar Brim is running for his life on the dark streets of London after midnight, Tiger Tilley by his side and fear in his heart. A demon is pursuing him: the creature that has just murdered Lear. Edgar can hear its footsteps thudding behind him, feel its presence in dim alleys, sense it peering down from the rooftops of buildings, but he cannot see it, cannot even imagine it or what it might do to him. And as he runs, the shriveled arms of the supernatural old woman who has terrorized him since he was in his cradle are squeezing his chest so he can barely breathe. He had thought this was over—the fear, the visitations of the hag, and the monsters. But it is all here again: as real as the thick London mist.
Edgar’s flame-colored hair is like a spotlight in the darkness as he rushes past the weird denizens who populate the night like actors in a dream—ragged, staggering women, swerving swells and deformed beggars. This is where civilization has brought us in the greatest city on earth, thinks Edgar, this is progress. The shop windows are black, some boarded up for the night. Whispers and shouts and screams echo up and down the streets. Edgar feels the monster getting closer. Tiger moves at lightning speed, quick in her black trousers and loose shirt. She flies around a corner and up Drury Lane in front of him and he is desperate to keep up. His breath comes in heaves. The Crypto-Anthropology Society of the Queen’s Empire and the madman who operates it are just a few doors away. He has their guns.
They had left Jonathan and Lucy at the Langham Hotel, one-armed Professor Lear growing cold in his bed and his face whiter and stiffer by the hour, as if it were becoming a mask. The moment before he died, his eyes had stared at them as though he had seen the devil and he had spoken in a croak from dried lips, his larynx quivering in a mutilated throat marked with red lines like the imprints of a huge hand. “Monster,” he had whispered. And then: “Worse!” The creature that had been in the room had frightened Lear more than the living-and-breathing vampire they had destroyed two days before!

About The Dark Missions of Edgar Brim: Monster

The pulse-pounding second book in a gripping Gothic YA trilogy, featuring monsters from classic literary tales, secret societies and the fight between good and evil.

After vanquishing the terrible creature that stalked the aisles of the Royal Lyceum Theatre, Edgar Brim and his unusual crew of friends return to their mentor only to discover that he has been brutally murdered by an unknown assailant. The group go into hiding, Edgar desperate to protect his friends and family from what may be a second horrific creature torn from the pages of literature. Meanwhile, Edgar’s guardian, Alfred Thorne, forces him to pursue a trade, and so Edgar begins working with his uncle, Doctor Vincent Brim, and a renowned vivisectionist, the brilliant yet mysterious Doctor Godwin. The more time Edgar spends in the company of Godwin, the more he begins to wonder about Godwin’s motives. And time is running out for Edgar and his friends. A monstrous creature is chasing them, a beast seemingly impervious to Thorne’s weaponry. Can Edgar Brim once again defy the horrors that pursue him, and protect those dearest to his heart?