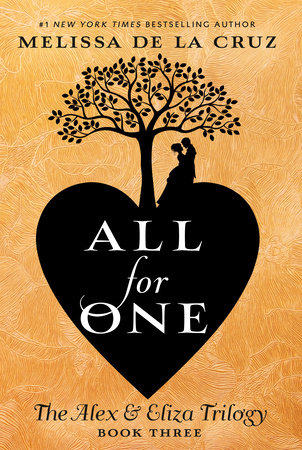 About All for One

Now in paperback, the dazzling finale to the trilogy that began with the New York Times bestselling Alex & Eliza: A Love Story, about the epic romance of Alexander Hamilton and Elizabeth Schuyler.

1785. New York, New York.
As a young nation begins to take shape, Alexander Hamilton and Elizabeth Schuyler are on top of the world. They’re the toast of the town, keeping New York City buzzing with tales of their lavish parties, of Eliza’s legendary wit, and of Alex’s brilliant legal mind.
But new additions to Alex & Eliza’s little family mean change is afoot in the Hamilton household. When they agree to take in an orphaned teenage girl along with Eliza’s oldest brother, John Schuyler, Eliza can’t help but attempt a match. It’s not long before sparks start to fly . . . if only Eliza can keep herself from interfering too much in the course of true love. After all, she and Alex have an arrival of their own to plan for, though Alex’s latest case brings a perilous threat that may destroy everything.
The sweeping love story of Alexander Hamilton and Elizabeth Schuyler comes to a close in All for One, the riveting final installment of the New York Times bestselling Alex & Eliza trilogy.

In case you didn’t know, Lovely War by Julie Berry is a masterpiece of the Greek Gods intervening in two sweeping love stories caught in the crossfire of World War II. There, we meet Aphrodite, on trial and defending her decision to intervene amongst the mortals in the midsts of Ares, Hephaestus, Apollo, and Hades. Although each … Continued
See More

There are some amazing reads in our near future…and ironically they’re set in the past. Basically, if historical fiction is your jam, you definitely don’t want to miss out on these top three picks!   1. Lovely War A sweeping, multi-layered romance with a divine twist, by the Printz Honor-winning author of The Passion of Dolssa, set … Continued
See More

Dear April, we would just like to say thank you thank you thank you for all the new books.   4/2: Life Sucks by Michael Bennett and Sarah Bennet – A book for teens that shows readers that we all deal with crap in our lives and how to laugh at some of the things we … Continued
See More

You know what? A lot (a LOT) of good books come out every year. So many that it can be hard to keep track. It’s great, but it can also be overwhelming. What if you miss out on something AMAZING? So, let’s go over a few upcoming releases you DON’T want to miss out on! … Continued
See More

Read an excerpt of ALL FOR ONE!

We fell in love with Alex and Eliza two books ago, and it’s hard to believe (or accept) that the end is almost here! But that’s what re-reads are for, right? In the mean time, we have a special excerpt for you to read while we (very impatiently) await the grand finale, All for One! 1 … Continued
See More

We knew this day would come, guys. As much as we love these series, all good stories must come to an end. It’s so hard to say goodbye, but the time has come to embrace the stunning 2019 finales of these 4 series.     1. Song of the Dead by Sarah Glenn Marsh   Odessa’s … Continued
See More

Summer may be a couple of months off still, but that just means it’s time to start on our Swoony Summer TBRs now! We can’t wait to fall in love with these 6 swoony summer reads. <3   1. Night Music by Jenn Marie Thorne The romance, the chemistry, THE MUSIC. This glance behind the … Continued
See More

Let’s face it: we all love a dashing love interest swaggering into our current read. It’s one of the many (many) wonderful things about YA we can always count on, and you better bet we’ve got plenty coming your way in 2019. via GIPHY But some of the best romances are the ones we … Continued
See More
SEE MORE