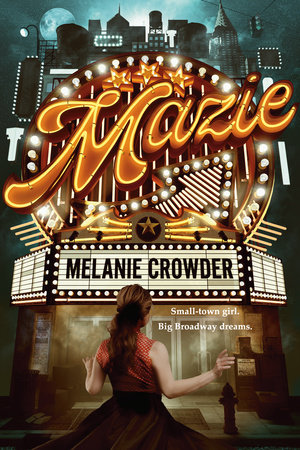 When the last note is done, a pang of longing hits—it happens every time. I hate working here. The plastic carnations in those beaded white vases that are always getting knocked over. The clamor in the kitchen so loud you have to shout every single order. The burns on my forearms and that perennial bruise on my right hip from the swinging kitchen doors. The way half the men who walk through that door ogle my body, like it’s part of the appetite they’ve come to satisfy. But I’m not me if I’m not onstage, even one as humble and greasy as this. And that time in the spotlight is almost worth more than the paycheck.
Almost.


Still, the best part of my shift is when it’s over.
I push through the front door, my skates knotted and slung over my shoulder. There he is, leaning against his grass-green Chevy, a smile brighter than both those headlights combined—all for me.
“Hey,” Jesse says. He slides a hand through his sandy brown hair and pushes off the truck.
“Hey yourself.”
The way he looks at me? I let it burrow between my ribs until my breath is short and that traitor heart of mine is banging against my chest like it wants him to know the effect he has on me. Then, whether I mean to or not, I’m beaming right back at him.
When I cross the parking lot, Jesse lifts the skates from my shoulder, snugs an arm around my waist, and kisses me like a soldier home from war, dipping me back over the hood just a
little—enough that my knees give and I stop breathing altogether, but not so much that the reverend’s wife will cross the street to give us a lecture on good Christian chastity.
Sparks dance around our heads, the bulb inside that goddamn ice-cream cone flickering above the Frosty Top sign like it’s about to pop. Or maybe my brain has used up all its oxygen and that twinkling is its last, desperate plea for help. I pull back despite myself, suck in a breath, and pray some common sense comes in with it. I remind myself, like I do every single time, not to fall one inch further for this boy. Because much as I love Jesse, I am going to leave him and the rest of Nebraska behind—the first chance I get.

An eighteen-year-old aspiring actress trades in starry Nebraska skies for the bright lights of 1950s Broadway in this show-stopping novel from award-winning author Melanie Crowder.

Mazie has always longed to be on Broadway. But growing up in her small Nebraska town, that always seemed like an impossible dream. So when an opportunity presents itself to spend six weeks auditioning, Mazie jumps at the chance, leaving behind everything–and everyone–she’s ever known.

New York City is a shock to the senses: thrilling, but lonely. Auditions are brutal. Mazie’s homesick and she misses the boyfriend whose heart she broke when she left. Nothing is as she expected.

With money running out, and faced with too many rejections to count, Mazie is more determined than ever to land a role. But when she discovers that booking a job might mean losing sight of herself, everything Mazie always thought she wanted is called into question.

Mazie is the story of a girl caught between two lives–and two loves–as she navigates who she is, what matters most, and the cost of following her dream.

“Mazie’s authenticity makes this novel stand out. Recommended for all collections, especially where theater is popular.”– School Library Journal

February is coming in with some HIGHLY-anticipated reads, and we’re here to tell you what to add to that TBR list ASAP!   2/2: A Taste for Love by Jennifer Yen – For fans of Jenny Han, Jane Austen, and The Great British Baking Show, A Taste for Love, is a delicious rom com about first love, familial … Continued
See More