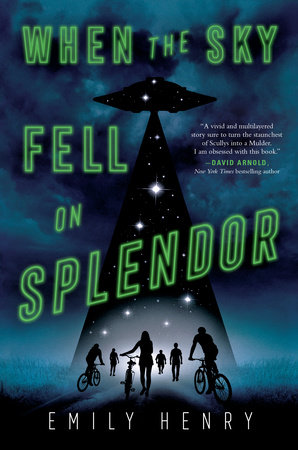 About When the Sky Fell on Splendor

The Serpent King meets Stranger Things in Emily Henry’s gripping novel about a group of friends in a small town who find themselves dealing with unexpected powers after a cosmic event.

Almost everyone in the small town of Splendor, Ohio, was affected when the local steel mill exploded. If you weren’t a casualty of the accident yourself, chances are a loved one was. That’s the case for seventeen-year-old Franny, who, five years after the explosion, still has to stand by and do nothing as her brother lies in a coma.

In the wake of the tragedy, Franny found solace in a group of friends whose experiences mirrored her own. The group calls themselves The Ordinary, and they spend their free time investigating local ghost stories and legends, filming their exploits for their small following of YouTube fans. It’s silly, it’s fun, and it keeps them from dwelling on the sadness that surrounds them.

Until one evening, when the strange and dangerous thing they film isn’t fiction–it’s a bright light, something massive hurtling toward them from the sky. And when it crashes and the teens go to investigate…everything changes.

Read an excerpt of When the Sky Fell on Splendor!

If you’re lowkey glaring at Netflix for taking so long to give us the next season of Stranger Things, you aren’t the only one. And we have a book for that. AND IT COMES OUT IN FOUR DAYS! Scroll down for a special excerpt of When the Sky Fell on Splendor!   THE NIGHT OF THE crash … Continued
See More

Is the real world stressing you out? Is outside getting to that lock-yourself-indoors-with-the-heat-and-a-good-book point? These books will make it all seem not so bad. Here are the top bonkers-stressful books about disasters we’re very grateful have not happened in real life, and can’t help but love to read about anyway.   1. Grasshopper Jungle by Andrew … Continued
See More

Top 4 Sci-Fi MUST reads this spring!

Spring, please hurry up. It’s cold outside. So, in the meantime, let’s all distract ourselves by prepping our Sci-Fi Spring Reading Lists! (Is Sci-Fi Spring a thing? We’re gonna say it’s a thing.)   1. When the Sky Fell on Splendor by Emily Henry Waiting desperately for the next season of Stranger Things? We’ve got you. The … Continued
See More

Okay, first of all: STRANGER THINGS SEASON 3 SPOILER ALERT. There are SPOILERS ahead.   Got it? Yes? Okay, here we go.     Hopper deserved better. So did Alexei. Oh, and Billy? We see you too, Billy. Maybe take a moment and cry it out before reading on, but in honor of the (literally) … Continued
See More

March is nearly upon us already and with it…NEW MARCH RELEASES!   3/5 Lovely War by Julie Berry A sweeping, multi-layered romance with a divine twist, by the Printz Honor-winning author of The Passion of Dolssa, set in the perilous days of World Wars I and II.   3/5 Chrysalis by Brendan Reichs The stunning finale of … Continued
See More

So season 5 of Black Mirror dropped on Netflix and it’s probably safe to say everyone was pretty excited to see Miley Cyrus as a wig-wearing popstar again (shoutout to everyone out there who still isn’t over the last season of Hannah Montana *cries*.) But then, alas, the inevitable happens. You watch. You binge-watch. You run out of episodes. So, … Continued
See More
SEE MORE