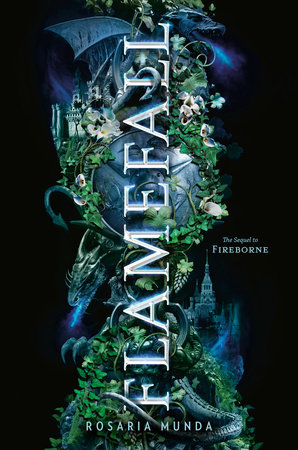 Revolutionary flames ignite around Annie, Lee, and a brand new character in the follow-up to FIREBORNE.

After fleeing the revolution and settling into the craggy cliffs of New Pythos, the dragonlords are eager to punish their usurpers and reclaim their city. Their first order of business was destroying the Callipolan food supply. Now they’re coming for the dragonriders.

Annie is Callipolis’s new Firstrider, charged with leading the war against New Pythos. But with unrest at home, enforcing the government’s rationing program risks turning her into public enemy number one.

Griff, a lowborn dragonrider who serves New Pythos, knows he has no future. And now that Julia Stormscourge is no longer there to protect him, he is called on to sacrifice everything for the lords that oppress his people–or to forge a new path with the Callipolan Firstrider seeking his help.

With famine tearing Callipolis apart and the Pythians determined to take back what they lost, it will be up to Annie, Lee, and Griff to decide who–and what–to fight for.

If you’ve been paying attention to the goings on of YA, you’ve probably have noticed a whole lot of chatter about the amazingness that is Fireborne by Rosaria Munda and its sequel Flamefall. Between the dragons, political intrigue, and wildly complex relationships of characters that had our hearts absolutely aching, Rosaria Munda pretty much captivated fantasy shelves everywhere. And that’s … Continued
See More

FLAMEFALL is coming, and you can start reading it now!

Dragons and romance and political intrigue, oh my! Revolutionary flames ignite around Annie, Lee, and a brand new character in the follow-up to Fireborne, Flamefall! Scroll down to start reading! Psst! Need to catch up on Fireborne first? Click here for more info! Chapter One: New Pythos GRIFF Julia’s missing, and I’m in a terrible mood. … Continued
See More

Fireborne is the Game of Thrones meets Red Rising fantasy you’re going to cuddle up with (hot beverage and warm blanket required…tissues strongly encouraged) and read straight through. It’s intense, it’s complex, it’s rich with characters and relationships that will break you and that is just the TIP of the iceberg. Here are five (how did we … Continued
See More

A Visitor’s Guide to Callipolis

Just recently picked up Fireborne? Or perhaps you’ve read it twice and are now eagerly waiting on its sequel, Flamefall? Whether you’re a newbie or a die hard fan, we were lucky enough to get you a visitor’s guide to Callipolis from author Rosaria Munda! Visit the world of Fireborne below! Welcome to the island of … Continued
See More

See the new covers for FLAMEFALL and FIREBORNE by Rosaria Munda

Today we’re revealing the cover for Flamefall by Rosaria Munda AND the brand new paperback cover for Fireborne! Fireborne absolutely took our breath away last year, and we are EAGERLY anticipating book 2, Flamefall, coming March 23, 2021! But until then, we have an excerpt and an author Q&A to hold you over while you wait for book 2 and gaze at … Continued
See More
SEE MORE