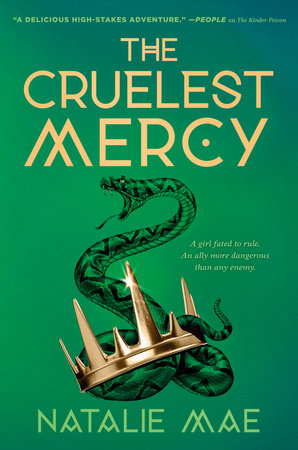 About The Cruelest Mercy

In this sequel to The Kinder Poison–which People magazine proclaimed a “delicious high-stakes adventure”–the magical kingdom of Orkena is on the brink of war, and the only person who can save it is Zahru, the girl they once doomed to death.

After surviving the Crossing, Zahru has sworn off adventures. While Crown Prince Jet navigates the looming threat of war, she’s content to simply figure out what the future holds for them. But they’re dealt a devastating blow when prince Kasta returns with a shocking claim: he’s the true winner of the Crossing and the rightful heir, and he bears the gods’ mark as proof. Even more surprising–he’s not the only one.

Somehow, Zahru possesses the very same mark, giving her equal right to the throne. The last thing she wants is to rule beside her would-be executioner, but she can’t let Orkena fall into his merciless hands. So Zahru, Jet, and their allies must race against the clock to find a way to stop Kasta, because once he’s crowned, there’s no telling what horrors he’ll unleash to win the war.

Zahru will do whatever it takes to keep Kasta from taking the throne…but to stop a villain, is she willing to become one herself?

Series finales are always bittersweet. While it’s tough to let go of characters we’ve come to adore, we’re also dying to find out how it all ends! So, here are 8 series you’ll DEFINITELY want to make sure you’re all caught up on before the finales hit shelves this year! (Don’t worry, we tried our best … Continued
See More

COVER REVEAL: The Cruelest Mercy, sequel to The Kinder Poison!

Cover reveal time! We are SO excited to show off the cover to The Kinder Poison‘s sequel, The Cruelest Mercy! And also…we may have snagged a first chapter excerpt to share! AND an author interview! We spoil you. Get ready for The Cruelest Mercy. In this sequel to The Kinder Poison by Natalie Mae–which People magazine proclaimed a “delicious high-stakes adventure”–the … Continued
See More
SEE MORE