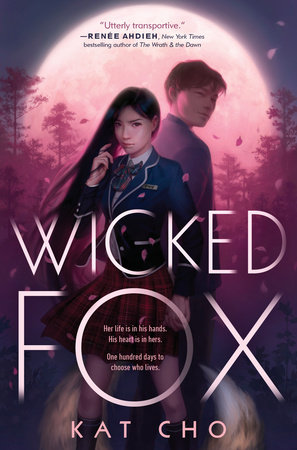 GU MIYOUNG’S RELATIONSHIP with the moon was complicated, as are most relationships centered around power.

Her muscles vibrated with anticipation as she balanced on the edge of the roof. The moonlight made her skin itch, like a string pulled too tight. She breathed deeply to steady her speeding heart, and the stench of rotten trash filled her nostrils.

Her mother told her to be grateful for the power of the moon. It gave her strength, but sometimes Miyoung resented being strong.

Miyoung scanned the roads below. The streetlights were burnt out and had probably been so for a while. Miyoung didn’t mind. She saw as easily in the dark as most did in broad daylight. In her opinion, the broken lights only helped the aesthetic of the buildings. Cracks spidered across the crumbling facades, decorated with blooms of mold. Perhaps a more optimistic soul would see a strange beauty in the pattern, but not Miyoung.

She pulled out her phone and dialed one of the two numbers saved in it.

“Did you find him, Seonbae?” Nara asked as soon as she picked up.

The way she stuttered out seonbae made the respectful title sound suffocatingly formal. As if she were speaking to an elder twice her age, instead of Miyoung, who was only a year her senior. But Miyoung knew the younger girl used the title for multiple reasons, one being that two weeks ago her name hadn’t even been Gu Miyoung.

“I tracked him to the same alley. He’s been coming here all week—just haven’t figured out which apartment he goes into.”

“I’ve been trying to use the phone location app,” Nara said helpfully. “It says you’re right on top of him. Or is that your location? Click on your GPS.”

Miyoung wanted to tell Nara to stick to communing with the spirits, but instead she swiped her screen and turned on the tracking option.

“Wait, now there are two of you.” Nara fell into muffled mutters. Miyoung rolled her eyes to the heavens as she held her tongue. It wouldn’t help to yell. Nara was nervous by nature, a side effect of her ability to see ghosts since birth.

To stop herself from pacing, she sat on the edge of the roof and let her feet dangle over the six-story drop. Gaining the high ground allowed her to stake out the area as well as her prey.

Still, she’d only seen him from a distance, going on the vague description from Nara.

Miyoung closed her eyes and counted to ten to settle her nerves.

Before her lay the cityscape of Seoul. The skyscrapers of Cheongdamdong, a mecca of entertainment and glamour, the home of fashion and K-pop. The soaring height of 63 Building, a symbol of the modernization of the capital city, sitting sentry beside the Han River. And the lights of Namsan Tower, where lovers and tourists went to see the world at their feet. Miyoung sneered at her own worn sneakers, dangling over a trash-filled alley.

“What is he doing here?” Miyoung mumbled, mostly to herself, but Nara answered.

“The spirit says he goes there every night. Her death was too violent.” The other girl’s words became morose. “She needs justice before she can pass to the afterlife.”

Miyoung wasn’t sure if what she did was justice. Still, it was better than nothing. And if she had to kill, she might as well help a few wayward ghosts settle their grudges.

The full moon increased her senses, opened her up to energy, allowed her to absorb it without ripping a man apart. So if she didn’t feed tonight, she’d have to wait another month or . . . she’d have to become a monster. She almost let out a laugh because she knew that even though the prey she chose were vile men, it didn’t mean she wasn’t a killer.

Still, she wouldn’t give in to her more base instinct, the one that wanted her to tear into flesh. To uncover the energy kept deep within every living creature. To drink that energy from a man without the need of the moon to channel it. No, she’d take it as gently as she could and pretend that she was a benevolent murderer.

She’d failed this task only once, and she’d refused to feed any other way, even when her mother begged. The only time she’d ever refused her mother. Miyoung’s body began to weaken within a week and didn’t recover until she fed at the next full moon. That’s why her mother had her rules, one of which was Never miss a hunt.

But Nara was a gifted young shaman, able to contact spirits across the country. And no matter where Miyoung moved, Nara had found victims for Miyoung each full moon without fail. A useful ally to have.

“What?” Miyoung asked, perhaps too gruffly.

“Be careful tonight. Many households banished evil spirits this month during Sangdalgosa. They might be wandering.”

Annoyed, Miyoung stood so she could start to pace again. “I’m not scared of a few spirits.”

Miyoung glanced down at the sound of a door squeaking open. She made out laughter and music from inside before the door swung closed, some kind of underground club. A man emerged. He was short and thick, his balding head pale white under the bright moon. She recognized the tattoo peeking through the wide collar of his shirt, an oversized spider he probably thought made him look tough but just accented his aging body in all the wrong ways.

“Got him. I’ll call you back.” Miyoung hung up as she stepped off the roof. She landed lightly on the ground, creating a cloud of dust and stink.

The man stumbled drunkenly and Miyoung kept pace with him. As she moved out of the shadows, muscles flexing as she prepared for the kill, he dropped a soju bottle he’d been carrying. Cursing, he sneered down at the shattered glass. Miyoung hid herself from sight. It was a knee-jerk reaction, but unnecessary. It didn’t matter if he saw her. He would tell no one of what happened tonight except other spirits.

Eighteen-year-old Gu Miyoung has a secret–she’s a gumiho, a nine-tailed fox who must devour the energy of men in order to survive. Because so few believe in the old tales anymore, and with so many evil men no one will miss, the modern city of Seoul is the perfect place to hide and hunt.

But after feeding one full moon, Miyoung crosses paths with Jihoon, a human boy, being attacked by a goblin deep in the forest. Against her better judgment, she violates the rules of survival to rescue the boy, losing her fox bead–her gumiho soul–in the process.

Jihoon knows Miyoung is more than just a beautiful girl–he saw her nine tails the night she saved his life. His grandmother used to tell him stories of the gumiho, of their power and the danger they pose to men. He’s drawn to her anyway. When he finds her fox bead, he does not realize he holds her life in his hands.

With murderous forces lurking in the background, Miyoung and Jihoon develop a tenuous friendship that blossoms into something more. But when a young shaman tries to reunite Miyoung with her bead, the consequences are disastrous and reignite a generations-old feud . . . forcing Miyoung to choose between her immortal life and Jihoon’s.

Looking for a stack of books to get totally lost in for a while? Here’s a list of a few of our favorite escape reads!   Falling Kingdoms by Morgan Rhodes If you’re looking for a long, rich fantasy series, this is a great place to start! About the books: Love, power, and magic collide … Continued
See More

Looking for your next summer read? These books are hitting shelves this month!   7/7: The Damned by Renée Ahdieh – New York Times bestselling author Renée Ahdieh returns with the second installment of her new sumptuous, sultry and romantic series, The Beautiful.   7/7: The Unleashed by Danielle Vega – In the terrifying sequel to The Haunted, Hendricks … Continued
See More

She’s dropped the album, we’ve listened to it on REPEAT, just a few hundred times already and we’re READY: It’s your ultimate Taylor Swift Lover Album YA Book Track Match!   Track 1: I Forgot That You Existed Book Match: If I’m Being Honest Oh Cameron, she’s so blunt that her barbs come off as … Continued
See More

Whether you want to swoon over the magic of Wicked Fox, fake it till you make it in David Yoon’s newest romcom, giggle over the sweet romance of The Best Laid Plans, or get swept away by Amir’s adventure in How It All Blew up, we’ve got a read for every romance fan!   Wicked Fox by Kat Cho A fresh … Continued
See More

Cover reveal time! We all fell MADLY in love with Kat Cho’s Wicked Fox. But it also left us with questions. We need to know what’s next for Miyoung and Jihoon! We don’t have all the answers yet, but luckily, we DO have a cover to show you. And it. is. GORGEOUS. Prepare your eyeballs and scroll down … Continued
See More

YA books are longer than 280 characters. Conversations about YA should be too. Welcome to the We Are YA podcast! Over 7 episodes, host Anna Borges will be talking all all things YA with the amazing authors that make up the modern YA community. Here is where you can find additional information and links to each episode! … Continued
See More
SEE MORE

@PenguinTeen: RT @kristincashore: Just a reminder that the ebooks of #Graceling, #Fire, and #Bitterblue are only $1.99 through Saturday 1/30, for US read…