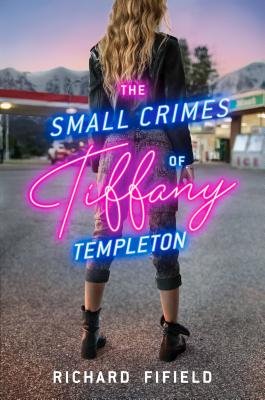 The Small Crimes of Tiffany Templeton

The court-appointed advocate dropped me off at two o’clock in the morning. She didn’t even bring me all the way to my house, just left me on the side of the highway. I guess she wasn’t worried about my safety, lugging a suitcase without wheels all the way around the loop in the middle of the night. I was the only girl from Dogwood that didn’t want to be paroled, but the other girls didn’t have to return to Gabardine. I dragged the suitcase across the frozen ruts in the road, the ice sparkling under a thin winter moon, the only light in the entire trailer court. The front door was unlocked, but nobody locked their doors in my hometown.

It was only appropriate that my first day back at high school fell on the first day after spring break. I guess my classmates looked well rested. I had slept for less than four hours, and I’m sure it showed.

David could smell my vulnerability. Before the bell even rang in homeroom, he had managed to set a trap for me, just to watch it spring shut. Eighty-three days, but it was like I never left. I thought he would acknowledge my return, but he looked away and moved his desk closer to the radiator, cold as always. He barely fit in his desk. David was nearly six foot three, the kind of guy who was born with muscles, even though I know the only exercise he got was from arts and crafts. Blond, gorgeous, and, this morning, full of evil.

David was my best friend.

That morning, he ignored me, so I knew a plot was in motion. I expected something spectacular, but he just sent over a cheerleader to say something mean. He’d appointed himself in charge of the cheerleaders ages ago, and they all did his bidding. Kaitlynn, Caitlyn, Victoria, and Becky may have been varsity, but they were totally JV when it came to everything else. David fed them the insults, just like he monitored the rest of their diets. Their eyes betrayed them, every single time.

Kaitlynn approached me, as soon as she made sure everybody was seated.

“If we had a yearbook, you would be voted most likely to do a school shooting,” said Kaitlynn. She looked off to the side, calculating, double-checking her memory, making sure she had put emphasis on the right words. David even coached their line readings.

“I’m pretty sure that’s not a yearbook category,” I responded.

“Whatever,” she said. “I can just see you shooting up trigonometry.”

“It would probably be gym class,” I said. “But I’m the only one in our class who doesn’t own a gun.” Hunting was big in Gabardine. Principal Beaudin actually let kids miss school for hunting season.

“Freak,” she said, and walked away. It was a lame retort, but that’s how I knew it was her own.

I endured these things, because they didn’t mean them, and because this was some sort of gay muscle that David was training.

You would think he would be a target, but he was always the first to draw his weapon. I guess you could call him the most popular person in our school, but we all grew up together, and there was no hierarchy. David was not popular, he was a glue trap that we all got stuck in before we knew it.

I know it sounded weird, but David was my best friend. I think he threw chaos at me just to keep things interesting. I was the wild card. I was the one that didn’t fit his idea of what a high school should be. David read every single Sweet Valley High book, but he thought they were instruction manuals.

When we were freshmen, he tried to convince me to get a makeover. It was not the first time. “When we’re old, we will remember high school,” he had said. “Even if you end up in prison, you’re still going to reminisce.”

“We don’t have homecoming,” I said. I guess I was wrong about that. After almost three months away, here it was, my own personal homecoming.

During earth science, Kaitlynn appeared in the doorway. She was the office aide, which meant she roamed the halls and sometimes cut holiday decorations out of construction paper.

“Mr. Baker. The sheriff is in the office.”

“He’s here for that girl.” She pointed at me. I’d known her for fifteen years. “And he’s armed.”

About The Small Crimes of Tiffany Templeton

The Serpent King meets Girl in Pieces in this moving and darkly funny story about a teenage girl coming of age and learning how to grieve in small-town Montana.

Tiffany Templeton is tough. She dresses exclusively in black, buys leather jackets that are several sizes too big, and never backs down from a fight. She’s known in her tiny Montana town as Tough Tiff, and after her shoplifting arrest and a stint in a reform school, the nickname is here to stay.

But when she comes back home, Tiffany may not be the same old Tough Tiff that everybody remembers. Her life is different now: her mother keeps her on an even shorter leash than before, she meets with a probation officer once a month, and she’s still grieving her father’s recent death.

As Tiffany navigates her new life and learns who she wants to be, she must also contend with an overbearing best friend, the geriatric cast of a high-maintenance drama production, her first boyfriend, and a town full of eccentric neighbors–not to mention a dark secret she’s been keeping about why the ex-football coach left town.

Spring! Birds are chirping, new life is in the air and NEW BOOKS ARE IN THE WORLD! And Spring 2020 is packed full of amazing reads. But first, you just have to see these covers that are so #bookstagramgoals you’ll be counting down the days until you can get them on your shelf! IT’S THE … Continued
See More
SEE MORE