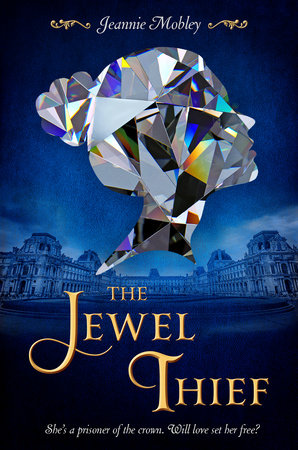 About The Jewel Thief

A lush, slow-burn romance set in 17th century France, and based on the history of the Hope Diamond–The Glittering Court meets Alex and Eliza.

Her story begins . . . in Paris. The only daughter of the King’s crown jeweler, Juliette marvels at the large, deep-blue diamond Louis XIV has commanded her father to make shine like the sun. But Jean Pitau has never cut a diamond quite like this, and shaping it is a risky endeavor. As Jean spirals into depression, Juliette takes it upon herself to cut the stone, and with every misstep, brings her family closer to ruin.

Her story resumes . . . in a cold, dark cell of the Bastille prison. Charged with stealing the King’s diamond, Juliette has but one chance to convince him that her motives were pure. If she fails, this night may very well be her last. Though, death wouldn’t be her worst fate. Because recording Juliette’s confession is René, a court-appointed scribe, and the man she loves. But René holds his own grudge against Juliette, and this is her one and only chance to win back his heart.

Summer, 2020 is packed full of amazing reads…and you’re about to get an exclusive sneak peek. IT’S TIME FOR THE SUMMER 2020 COVER REVEAL BONANZA. Today, we are revealing not one, not two, but SIX covers, from debut authors to the beloved return of our favorite witchy characters! We may have even snatched an excerpt for each … Continued
See More
SEE MORE