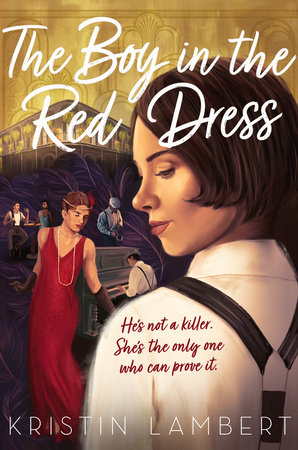 The Boy in the Red Dress

“What’s going on here?” I called out, and Vanderbilt turned to stare at me, his face pale in the light of the two naked bulbs hanging from the hallway ceiling. His mouth opened, but no sound came out, and he pressed a fist against it as if he might be sick.

He turned away again, doubling over and retching. And then I saw the bright shape under the silvery moonlight, motionless on the damp gray cobblestones.

My footsteps slowed. The night enveloped me like a giant clammy fist. A cacophony of champagne pops, happy shouts, and jazz rose up to meet midnight in the crowded streets all around us, but here in this sheltered courtyard, no one acknowledged the time. The air smelled sharply of vomit, thanks to Vanderbilt, and something else underneath it I couldn’t place and didn’t want to name.

I knew this courtyard at night. It was the place where rats skittered when I dumped the mop water or took out trash to the burn barrel. It was the place I trudged through to get home after closing, when my feet were tired and my eyes barely open. The place we were supposed to escape through if Prohibition agents or cops came through the front.

Beyond the slanted rectangle of yellow light from the open door, just past the dark shadow of the balcony above, Fitzroy and Rockefeller crouched over the shape on the ground, two black hulks in their dark suits. Rockefeller was touching the shape gently and murmuring something.

It was a person. A body.

No one heard me except Frank, who touched my arm as if to stop me moving forward, stop me getting involved, make me let him go first. None of which I was going to do.

“Who is she?” I said, louder. The body, it was obvious now that my eyes were adjusting to the dark, was a woman’s. A girl’s. Her beaded gold dress and brilliant hair spread out across the cobblestones beside the dry fountain like a shining puddle. A beaded handbag lay a few feet away.

No one answered me. I looked to my right at the two girls, clinging to each other and crying, both studiously not looking at the body.

Rockefeller picked up her hand, white and luminous in a ray of moonlight, and felt for a pulse in her wrist.

They were open, staring upward as if into the shadowed face of the dark-­haired boy hovering over her. Her head lay at a strange angle against the foot of the fountain. A fine mist beaded and glistened on her pale brow, her beautifully rounded cheekbones, her pink lips, her bright hair.

But whatever she’d done, she hadn’t deserved this. To die here on the cold ground, her body left to grow damp with mist and mop water while seventeen versions of “Auld Lang Syne”played around her and the whole Quarter celebrated.

No one deserved this.

My eyes pricked with tears I wasn’t expecting. Why should I cry for this girl? Why should I feel bile in the back of my own throat at the sight of her blank eyes, her wasted life? “Do you know what happened to her?” Frank asked, looking around at the rich kids. “Did you see anything?”

They shook their heads, their eyes wide and staring.

“I think . . .” Rockefeller spoke up, his voice choked. “I think she fell off the balcony.”

“Or someone pushed her,” one of the girls whimpered, the brunette who until recently had been screaming continuously.

“What was she doing up there?” the other girl said. She was almost my height with auburn hair, though everything was washed strange and blue in the moonlight. “Look there in her hand—­what’s that?”

A folded paper lay in Arimentha’s softly curled hand. In two strides, I’d reached her and plucked the paper up into my own hand.

“You shouldn’t do that,” Rockefeller said, straightening out of his crouch. “The police will want the crime scene to stay as it is.”

Whether this was a murder or an accident, it had happened at Aunt Cal’s club—­my club tonight—­and I would decide what we did about it.

I held the paper up to the moonlight and saw it was a playbill for a circus that had already left town the week before. We had a stack of them still sitting on the end of the bar.

“What is it?” Fitzroy said, standing, too.

I ignored him and unfolded the paper. There was writing inside, a brief penciled letter, in a hand that looked like it would’ve been pretty if it wasn’t scrawled in such a hurry. I didn’t have the light or patience to interpret all the words, but I didn’t have to.

The letter began with “Dear Marion.”

About The Boy in the Red Dress

A Gentleman’s Guide to Vice and Virtue meets Miss Fisher’s Murder Mystery in this rollicking romp of truth, lies, and troubled pasts.

Millie is running the show at the Cloak & Dagger, a swinging speakeasy in the French Quarter, while her aunt is out of town. The new year is just around the corner, and all of New Orleans is out to celebrate, but even wealthy partiers’ diamond earrings can’t outshine the real star of the night: the boy in the red dress. Marion is the club’s star performer and his fans are legion–if mostly underground.

When a young socialite wielding a photograph of Marion starts asking questions, Millie wonders if she’s just another fan. But then her body is found crumpled in the courtyard, dead from an apparent fall off the club’s balcony, and all signs point to Marion as the murderer. Millie knows he’s innocent, but local detectives aren’t so easily convinced.

As she chases clues that lead to cemeteries and dead ends, Millie’s attention is divided between the wry and beautiful Olive, a waitress at the Cloak & Dagger, and Bennie, the charming bootlegger who’s offered to help her solve the case. The clock is ticking for the fugitive Marion, but the truth of who the killer is might be closer than Millie thinks.

Excerpt Alert: The Boy in the Red Dress

In continuation of our #ReadPrideAndBeyond celebration, we’re sharing an excerpt from The Boy in the Red Dress by Kristin Lambert, a rollicking romp of truth, lies, and troubled pasts. New Year’s Eve, 1929. Millie is running the show at the Cloak & Dagger, a swinging speakeasy in the French Quarter, while her aunt is out of town. The new … Continued
See More

COVER REVEAL & SNEAK PEEK: The Boy in the Red Dress

Cover reveal (AND excerpt) time! Get ready for The Boy in the Red Dress by Kristin Lambert hitting shelves this May, is a rollicking romp of truth, lies, and troubled pasts. It’s New Year’s Eve, 1929.Millie is running the show at the Cloak & Dagger, a swinging speakeasy in the French Quarter, while her aunt is out of town. … Continued
See More
SEE MORE

@PenguinTeen: Cover reveal! How It All Blew Up by @arvinahmadi has a new paperback look, and we LOVE IT. Read more about the boo… https://t.co/BVbqJYIVx1

@PenguinTeen: RT @trublu24: Sharing wisdom on the topic of reconciliation from late mentors David Williams & Perry Wallace in today's @latimes: Why have…

@PenguinTeen: Deleting my dating apps because I want to meet someone the old fashioned way: I volunteer to be his new bride and a… https://t.co/KwCOCDatEq

@PenguinTeen: RT @AyanaGray: It’s been such a great week and I am DELIGHTED to end it by sharing some gorgeous new BEASTS OF PREY art by the talented @Th…

@PenguinTeen: Welcome to the 🐧 family, @JDeoWrites! Fans of #NeverHaveIEver, make room on your TBRs for TJ POWAR HAS SOMETHING TO… https://t.co/XVJHRlppiK

@PenguinTeen: When a gag gift of a DNA test from her friends, reveals that Chloe has a long lost family in Seoul. And they are de… https://t.co/EE7TUfEUFR