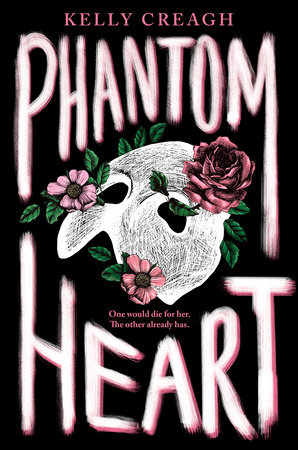 “He has lights for eyes.”

Brushing a few errant curls from my face, I glanced up from my homework and leveled my little sister, Charlie, with the full blast of skepticism she deserved. Ignoring her wasn’t working.

This whole week, she’d been talking about him. The masked man who lived in our new house. Our newest oldest house.

“There’s nothing in your closet, Chuck,” I said for the tenth time in four days.

A glower of indignation replaced the saucer--eyed stare of fright she’d been projecting my way ever since the sun had set, taking with it the cozy yellow glow that had surrounded our house—-an older--than--Christmas Victorian.

I pushed off from where I’d been lying belly--down across my metal--framed bed, calculus book open.

“All right, Chess,” I grunted, opting for the more acceptable nickname Dad had given her. I didn’t feel like trading Charlie’s six--year--old fear for her six--year--old fury: stomping and top--of--the--lungs screeching.

I took Charlie’s small hand, and she gave my fingers a squeeze.

“He talked to me last night,” she whispered, creeping me out. “He asked me questions.”

“Well.” I drew her toward the hallway. “Did you tell him to mind his own beeswax?”

Her feet stalled on the creaky, bare--wood floor. “He has bees?”

“No.” I bent down, bringing us eye level. “It’s a way of telling someone to leave you alone.”

She pointed down the long hallway to her doorway at the far end.

With the upstairs hall and bathroom lights off, I had to admit the trek to her bedroomdid look ominous.

“There’s no one in your room, Chesser.” I hit the switch that sent light bursting from the huge, original--to--the--house crystal chandelier that hung over the grand staircase. “This is a big old house, and old houses make noises sometimes.” Realizing I’d just repeated something I’d probably heard responsible adult figures say a billion times, I made an amendment. “Just think of it like house farts.”

Usually, fart talk got laughs from Charlie. This time, I didn’t get so much as a smile. Gently, I tugged her forward. It was like trying to drag an anvil.

“Houses shouldn’t have other houses inside them,” she said.

“That’s right, they shouldn’t,” I agreed.

“This one does.” Again with the whispers. Like she was afraid someone was listening in.

I knelt in front of her. “What’s really going on, Chess? You never asked to sleep in my room when we were at the last house.”

“Because there wasn’t a man in the closet at the last house.”

“Look. Do you want me to show you that there isn’t anyone in your closet?”

Her seriousness, coupled with her apparent confidence in my being a formidable opponent to her imaginary not--friend, made me smile.

I stood and meandered into her darkened room, where I flipped the light switch. I pivoted to face the closet in question. The door was open already, the small space inside empty.

Having inhabited the house for only a week, none of us had finished unpacking yet. Tired of having to box things up shortly after unboxing them, we’d all become accustomed to living in the land of limbo regarding our stuff. And Dad, perpetually “just about to” finish a place, never encouraged us to use anything as practical as a closet to store our clothes.

For us, “home” had never really been a location.

At least not since Charlie had come along.

“See?” I said, turning my gaze on my little sister, who stood toes--to--the--threshold in the doorway. “There’s no one there.”

To this, she said nothing. Just stared at the cracked plaster wall inside the otherwise vacant closet.

“There was a house in there,” she said. “Like ours but nicer.”

My shoulders slumped. This was dumb, and my calculus was getting cold.

“How about this,” I offered, plucking her stuffed octopus, Checkers, from her bed. “How about we swap rooms tonight? I’ll sleep in here, and Chess and Checkers can sleep in my bed.”

“He can get to your closet, too,” Charlie replied without missing a beat.

“Great,” I said, officially fresh out of patience. “So, either way, you can send him to me, this Zeebo guy—-”

“Right, okay.” I’d probably regret humoring her later. “You can send him to my closet, and I’ll tell him to get lost.”

“He told me to tell you he can see you in your dreams.” Her thumb crept toward her lips—-a nervous habit that usually meant she was afraid she was about to get in trouble. “And that you wouldn’t believe me when I told you about him. So he told me to tell you that he knows you like that boy with the blond hair.”

I scowled at her, though the only one I had to be angry with was myself. Most likely, Dad had asked her to get the scoop on Kyle, a cute guy in my chemistry class, who I might have brought up once or twice, just so Dad wouldn’t be soDad later when and if I actually made a blip on Kyle’s radar. As a result, Charlie had just factored Kyle into the sensory overload that came with yet another full--scale change.

Probably, the shadowing me through the house and “monster in my closet” talk also meant something more important was at play.

Charlie was feeling the move. And maybe the same sense of isolation that had begun to nibble at me in this decrepit once--upon--a--time palace was eating at my little sister, too.

This house wasn’t like the others my father had flipped. This Addams family mansion meets Poe’s House of Usher was, by far, my father’s most ambitious.

Not to mention his most risky.

The other houses, shotguns and suburban bi--levels, had taken three to four months to turn around with the help of a contractor. This one would require more than the projected six months. Which was good news for me, because that meant I might actually get to finish my last year of high school at Langdon. And even though there were only the three of us—-me, Charlie, and Dad—-I liked the idea of a bigger house that had room to stretch out in. I also liked the idea of a graduation ceremony at which I would not be seated next to total strangers.

Maybe I’d have friends who lived close enough to come to the party I’d already planned out in my head. One that would strategically place my tank--top-- and booty--shorts--clad body next to Kyle’s muscled and tanned one.

Of course, it had also crossed my mind that Dad had picked this project to give Charlie and me a chance to actually get used to the taste of the tap water somewhere. Then again, he could just as easily have bought this thing purely on the grounds that it included an ancient, inoperative piano.

Did she mean her room? Or the house.

I knew better than to ask.

Instead, I smoothed my brow and approached her with a smile. Charlie was right. Therewas something in this house. The same something we’d dragged with us to every house since leaving Syracuse. A ghost, I guess you could say.

The kind that lived in the heart, though.

“C’mon, you.” I handed over Checkers and hoisted my little sister into my arms. “Slumber party time. Just for tonight, though, okay?”

“ ’Kay,” she said, soft in my ear, though the tenseness in her tiny frame told me that she hadn’t been paying attention to my words. That, instead, as her focus remained trained on the doorway toher closet, her little girl’s mind fixated on the creature it had cooked up.

An entity whose appearance in our lives had, I was sure, little to do with the move and more to do with the fact that Charlie had reached an age where she was starting to notice what was missing.

Seventeen-year-old Stephanie Armand doesn’t believe in ghosts or spirits. Despite her six-year-old sister insisting a masked figure is hiding in her closet, and the rumors at school, Stephanie isn’t convinced her father’s latest renovation project–a crumbling Victorian mansion–houses the soul of a monster. So when the very charming (and paranormal-obsessed) Lucas Cheney takes an interest in both Stephanie and her notorious home, Moldavia, the supernatural and romantic activity escalates to an all-time high. But then there’s Erik– the dashing British boy, seemingly from another era, who’s taken up residence in Stephanie’s nightly dreams. A boy who may have something to do with the man in the mask, and the strange occurrences taking place at Moldavia.

2021 has been filled with amazing reads of all categories, and we want to make sure you haven’t missed out on any! Scroll down to see our recap of some of 2021’s top trending romance reads!   Some Girls Do by Jennifer Dugan In this YA contemporary queer romance from the author of Hot Dog Girl, an … Continued
See More

Every book hitting shelves in August 2021!

Summer has been KILLING it in the book category, and it’s only about to get better. Here’s what’s coming to shelves this August!   8/3: Sugar Town Queens by Malla Nunn – From Los Angeles Times Book Prize Award winner and Edgar Award nominee Malla Nunn comes a stunning portrait of a family divided and a powerful story … Continued
See More

2021 has filled our shelves with incredible reads…and there’s more to come! So, here are the reads to look out for in the second half of 2021!   We Are Inevitable by Gayle Forman – 6/1 Aaron Stein used to think books were miracles. But not anymore. Even though he spends his days working in … Continued
See More
SEE MORE