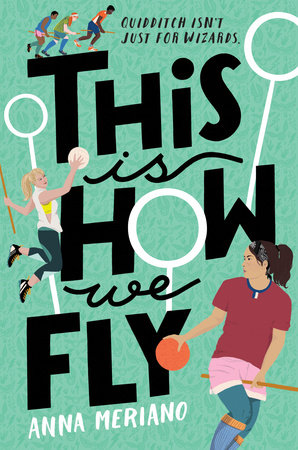 This is How We Fly

About This is How We Fly

A loose retelling of Cinderella, about a high-school graduate who–after getting grounded for the whole summer–joins a local Quidditch league and finds her footing, perfect for fans of Dumplin’, Fangirl, and everyone who’s read and adored Harry Potter.

17-year-old vegan feminist Ellen Lopez-Rourke has one muggy Houston summer left before college. She plans to spend every last moment with her two best friends before they go off to the opposite ends of Texas for school. But when Ellen is grounded for the entire summer by her (sometimes) evil stepmother, all her plans are thrown out the window.

Determined to do something with her time, Ellen (with the help of BFF Melissa) convinces her parents to let her join the local muggle Quidditch team. An all-gender, full-contact game, Quidditch isn’t quite what Ellen expects. There’s no flying, no magic, just a bunch of scrappy players holding PVC pipe between their legs and throwing dodgeballs. Suddenly Ellen is thrown into the very different world of sports: her life is all practices, training, and running with a group of Harry Potter fans.

Even as Melissa pulls away to pursue new relationships and their other BFF Xiumiao seems more interested in moving on from high school (and from Ellen), Ellen is steadily finding a place among her teammates. Maybe Quidditch is where she belongs.

But with her home life and friend troubles quickly spinning out of control–Ellen must fight for the future that she wants, now she’s playing for keeps.

Filled with heart and humor, Anna Meriano’s YA debut is perfect for fans of Dumplin’ and Hot Dog Girl.

Praise for This is How We Fly:

*“Readers will find much to appreciate about Ellen’s fresh, relatable journey to define herself on her own terms.” —Publishers Weekly (starred review)

“Anna Meriano’s This is How We Fly is a delightful treat of a book that will make you want to grab your broom and go! A story of a young woman at a crossroads summer, this tale tackles the growing pains of late adolescence – family struggles, changing friendships, new crushes – with so much grace and heart. See you on the pitch!” – Jennifer Mathieu, author of The Liars of Mariposa Island and Moxie

“This is How We Fly breathes new life into a sport and retelling we think we know and lets them bake beneath the Texas sun. Anna Meriano has written one of the most authentic teen voice I’ve read in years.”–Nina Moreno, author of Don’t Date Rosa Santos

“This is How We Fly is, at its heart, about fierce friendships, flirty beaters, and firsts. Anna Meriano takes the magical fairytale of Cinderella and gives it a bookish twist. Ellen is an existential crisis on a broom and I love her.” – Ashley Poston, National Bestselling Author of Geekerella

“Meriano adeptly weaves questions of identity, friendship and family into this delightful summer tale about the thrilling world of club Quidditch. At times both hilarious and heartbreaking, this incredible story is sure to leave you flying high.”–Jennifer Dugan, author of Hot Dog Girl and Verona Comics

YA Retellings we are OBSESSED with

Do you love classic lit, fairytales, and legends? We think you’d like these modern retellings!   Love The Great Gatsby? Try…   Tell Me My Name by Amy Reed We Were Liars meets Speak in this haunting, mesmerizing psychological thriller—a gender-flipped YA Great Gatsby—that will linger long after the final line On wealthy Commodore Island, Fern is watching and waiting—for … Continued
See More

Excerpt Alert: This Is How We Fly by Anna Meriano

This Is How We Fly is hitting shelves December 15th and we can’t wait! This loose retelling of Cinderella follows a high-school graduate who–after getting grounded for the whole summer–joins a local Quidditch league and finds her footing. Scroll down to read an excerpt! Two days later, I’m digging through my closet trying to locate a decent pair … Continued
See More

It’s cover reveal time! Today, we are revealing not one, not two, but THREE stunning covers. Get ready to stack that TBR!! First up, we’re talking about Tochi Onyebuchi’s highly anticipated follow-up to WAR GIRLS. Are you ready for this? Prepare your eyes for the jaw-dropping cover that is REBEL SISTERS!   REBEL SISTERS by Tochi Onyebuchi  In … Continued
See More

Looking for something gorgeous to add to your shelf? From the deluxe edition of a classic YA read, the new collector’s edition of a swoony love story set in Paris, a fun Cinderella retelling with a side of Quidditch (yes, you read that right!) for the fairytale lover in you, or a powerful series of … Continued
See More
SEE MORE