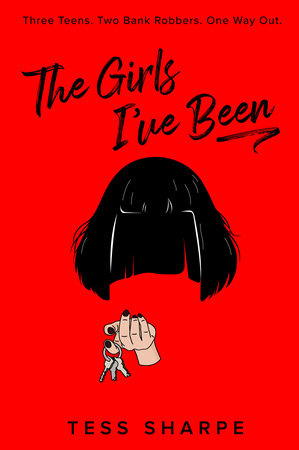 About The Girls I’ve Been

A slick, twisty YA page-turner about the daughter of a con artist who is taken hostage in a bank heist.

Nora O’Malley’s been a lot of girls. As the daughter of a con-artist who targets criminal men, she grew up as her mother’s protégé. But when mom fell for the mark instead of conning him, Nora pulled the ultimate con: escape.

For five years Nora’s been playing at normal. But she needs to dust off the skills she ditched because she has three problems:

#1: Her ex walked in on her with her girlfriend. Even though they’re all friends, Wes didn’t know about her and Iris.

#2: The morning after Wes finds them kissing, they all have to meet to deposit the fundraiser money they raised at the bank. It’s a nightmare that goes from awkward to deadly, because:

#3: Right after they enter bank, two guys start robbing it.

The bank robbers may be trouble, but Nora’s something else entirely. They have no idea who they’re really holding hostage . . .

Today we’re revealing the cover for Tess Sharpe’s The Girls I’ve Been, a slick, twisty YA page-turner about the daughter of a con artist who is taken hostage in a bank heist. Oh, and did we mention it’s already planned to be adapted by Netflix, starring and produced by Millie Bobby Brown?!   Scroll down to … Continued
See More

The Girls I’ve Been