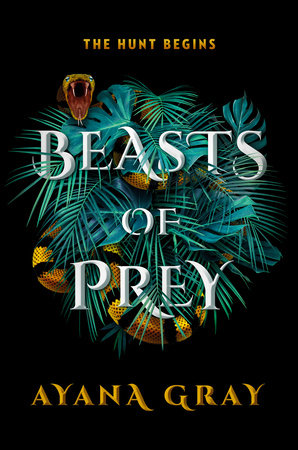 About Beasts of Prey

In this much-anticipated series opener, fate binds two Black teenagers together as they strike a dangerous alliance to hunt down the creature menacing their home—and uncover ancient deadly secrets.

There’s no such thing as magic in the broken city of Lkossa, especially for sixteen-year-old Koffi, who holds a power within her that could only be described as magic—a power that if discovered could cost her life. Indentured to the notorious Night Zoo, Koffi knows the fearsome creatures in her care and paying off her family’s debts to secure their eventual freedom can be her only focus. But the night those she loves are gravely threatened by the Zoo’s cruel master, Koffi finally unleashes the power she doesn’t fully understand, upending her life completely.

As the second son of a decorated hero, Ekon is all but destined to become a Son of the Six—an elite warrior—and uphold a family legacy. But on the night of his final rite of passage, Ekon encounters not only the Shetani—a vicious monster that has plagued the city for nearly a century and stalks his nightmares, but Koffi who seems to have the power to ward off the beast. Koffi’s power ultimately saves Ekon’s life, but his choice to let her flee dooms his hopes of becoming a warrior.

Desperate to redeem himself, Ekon vows to hunt the Shetani and end its reign of terror, but he can’t do it alone. Meanwhile, Koffi believes finding the Shetani could also be the key to solving her own problems. Koffi and Ekon form a tentative alliance and together enter the Greater Jungle, a world steeped in wild, frightening magic and untold dangers. The hunt begins. But it quickly becomes unclear whether they are the hunters or the hunted.

Black Friday is still notoriously a wild time, even if it’s just a chill night of you trying to decipher how you added so many new books to your online shopping cart. Regardless, it’s one of those days that requires a cup of hot cocoa and a stack of good books to recover from. But luckily, … Continued
See More

Everything we know about the BEASTS OF PREY Netflix adaptation

Beasts of Prey is coming to Netflix, and here’s what we know so far!   It will be a developed as a major motion picture via GIPHY Here’s to hoping it’s at least 3 hours with all of our favorite scenes included!   Melody Cooper, a 2021 Sundance Episodic Lab Fellow, will pen the adaptation and … Continued
See More

Behind the scenes: Ayana Gray shares her biggest inspirations for writing Beasts of Prey!

We asked author Ayana Gray to share her top inspirations for writing her upcoming, HOTLY anticipated debut Beasts of Prey, a fantasy novel about two Black teenagers who strike a dangerous alliance to hunt down the creature menacing their home. And here’s what she had to say! My Biggest Book Inspirations   An Ember in the Ashes by Sabaa Tahir I … Continued
See More

If you ever find yourself in a thriller novel, it’s probably best to steer towards the nearest exit. But more importantly, do NOT go into the woods, and here are 6 books that show why!   The Woods Are Always Watching by Stephanie Perkins Simply put: the only thing being lost in the woods…is being … Continued
See More

Beasts of Prey by Ayana Gray is one of 2021’s most HOTLY anticipated reads, and luckily you don’t have to wait much longer…because it’s hitting shelves THIS TUESDAY. But we know waiting is hard. So we’re sharing a sneak peek to hold you over! Scroll down to start reading and prepare to enter the Greater Jungle! … Continued
See More

The official Beasts of Prey playlist!

With Beasts of Prey just around the corner (hello, Sept 28th!!) and the fandom growing FAST, we asked author Ayana Gray to share her Beasts of Prey playlist so you’re ready to tune in on Spotify and read along as soon as your copy comes in! So without further ado, onto you, Ayana! Hello!  This is definitely one of … Continued
See More

Halloween is almost upon us, and we are HERE with your perfect list of Halloween books. Whether you’re looking for ghosts, monsters, or a good ol’ classic slasher, here are 21 wicked reads GUARANTEED to get you in the Halloween spirit! Pssst! And you can enter to WIN THEM ALL at the bottom of this … Continued
See More

9 YA books for your autumn TBR!

Fall is upon us, and from fantasy, to poetry, and knockout debut novels, we’re here with 9 YA books for your autumn TBR you’ll DEFINITELY want to snuggle up with!   The Woods Are Always Watching by Stephanie Perkins  Click here for more info!   Dark and Shallow Lies by Ginny Myers Sain  Click here … Continued
See More

PLOT TWIST! 8 YA books that take a serious turn!

Love a mind boggling plot twist? These 8 YA books take a SERIOUS turn, and are guaranteed to be living in your head rent free for weeks to come!   Dark and Shallow Lies by Ginny Myers Sain When we say plot twist, we actually mean plot twist after plot twist. NOTHING is as it seems … Continued
See More

@PenguinTeen: Me starting to read in bed at 10pm https://t.co/e8N3p4ksJX

@PenguinTeen: What should be your first read of 2022? Head over to the Recommendation Station and take the quiz to find out!➡️… https://t.co/yoOSxvQFpL

@PenguinTeen: #ASkyBeyondtheStorm is hitting shelves in paperback Dec 7! Have some catching up to do? It might be time to rewatch… https://t.co/sN3YOwvbG7

@PenguinTeen: Want to chat about Huda F Are You? with creator @yesimhotinthis? Join Huda for an Instagram Live next week with Boo… https://t.co/azd9KiGSA3

@PenguinTeen: Need a break from the Black Friday craziness? We recommend a cup of hot cocoa and a good book. Here are our top 7 B… https://t.co/C2X4IGmeL9

@PenguinTeen: It’s not buying more books, I am simply future proofing myself from boredom