5 reasons why James thinks YOU should read War Girls!

War Girls by Tochi Onyebuchi is ON SHELVES NOW! And since I’ve selected it as my October Book Club Pick, I’m here to share why I think this book should be at the top of your TBR!

1. War Girls positions young women at the center of a story about war.

War Girls is inspired by the Nigerian–Biafran War that occurred in the 1960s, though the book itself is set 153 years in the future. It’s a personal story for author Tochi Onyebuchi, who drew inspiration from firsthand accounts from his mother, who lived through the war. So often women are excluded from narratives of war, but War Girls positions them as the protagonists of their story and gives them the spotlight they deserve.

2. Shuri from Black Panther is in it!*

*In spirit! One of the protagonists, Ify (short for Ifeoma), is a tech genius in the vein of Shuri, the leader and chief scientist for the Wakandan Design Group in Black Panther. If they were part of the same continuity, I feel like Ify and Shuri would be best friends. Ify is teaching herself orbital physics by the time she’s ten years old—and if that doesn’t give you Shuri vibes, then nothing will! 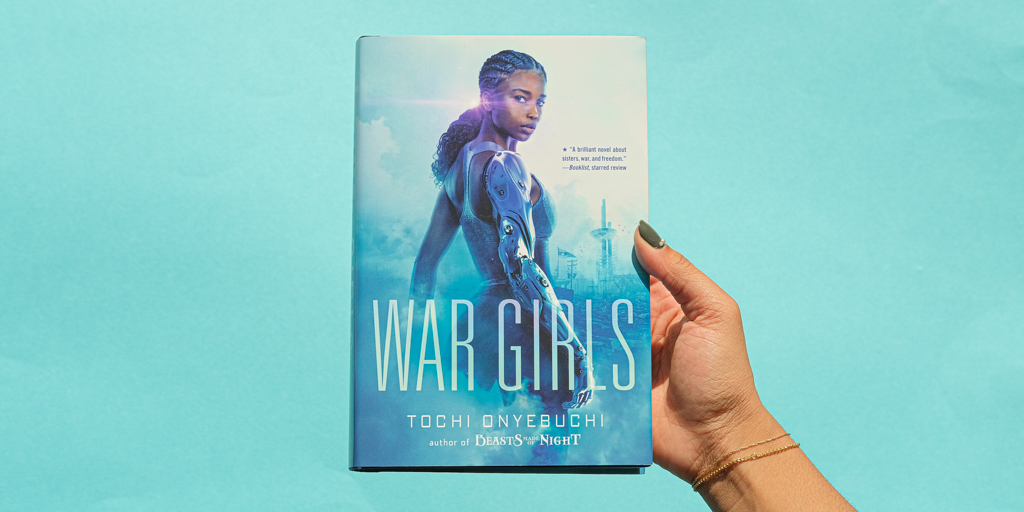 Ify and her older sister, 16-year-old Onyii, are the core and heart of War Girls. After their home camp is attacked during the ongoing civil war in Nigeria, Onyii and Ify spend the next 4 years fighting on opposite sides of the war. Ify grows up in Nigeria, while Onyii becomes a feared war hero known as the Demon of Biafra. But when Onyii and Ify discover that the other is alive, their worlds come crashing down around them. It’s the kind of story that will keep you furiously turning until the very last page to find out what happens next—that’s what it did for me!

And speaking of that very last page…

4. THAT ENDING WRECKED ME.

I’m sorry, my queen Okoye, but that ending most definitely made me freeze. Along with a plethora of other emotions that I cannot talk about yet, so when you get to that ending, please DM us at Penguin Teen. I NEED SOMEONE TO TALK TO ABOUT THAT ENDING.

5. The author, Tochi Onyebuchi, is a compelling voice for YA.

When he’s not kicking Joy off our videos, that is.

War Girls is now on shelves! Want to meet Tochi Onyebuchi at Penguin Teen Game Night? See if he’ll be coming through a city near you!