SHARE
+ Add to Goodreads
Audrey Nelson is planning for her future after graduation, but she has no idea her future contains a swoony summer romance, Internet fame, or a nursing home.

Audrey's life has been planned out for her since she was born, and now she's supposed to attend Whedon College in the fall, where both of her parents work. But Audrey has a different plan in mind: She's not going to attend college at all. She's going to earn some money and move to Seattle, the city she's loved since she was a child. And the best way to earn that money is by working the night shift at the local nursing home.

Seth O'Malley works there, too, and a romance quickly blossoms between them. But things get complicated when Audrey saves the life of Cameron Suzuki, Seth's ex. A video of her performing CPR at the beach goes viral, and suddenly, Audrey's wanted for TV interviews and newspaper articles. And just when Audrey starts to love life at the nursing home--and life with Seth--Seattle comes knocking. Does she follow the path she set out for herself, even when it means leaving behind Seth and the cast of quirky patients she's come to care for? Or does she embrace a future with Seth--at least for the foreseeable future--at the cost of abandoning her dreams?

“It’s an adorable town, right on the water. There’s a surf shop, a gas station, a restaurant called the Fish Shack, and that’s basically it.”

My host, a freshman named Vanessa, paused her spiel to check the time on her phone. She had already warned me about the risks associated with being late to dinner; apparently, the dining hall ran out of veggie burgers fast on Friday nights. “The problem with Crescent Bay is that it’s about a twenty-minute drive from campus, so you have to befriend someone with a car. But I totally recommend going into town as soon as you get a chance. It’s really quaint. I think the population is less than a thousand.”

Signing up for an overnight preview of life at Whedon College had been my parents’ idea. So far, my preview had entailed following this girl around while she took a lot of pride in scanning her ID card to open doors marked STAFF AND STUDENTS ONLY. Vanessa had a tangle of dirty-blond hair and wore, attached to her belt with a carabiner, a noisy collection of keys and small tools. She was the kind of person whom my best friend, Sara, would describe as mountain grunge. Letting her show me around felt sort of disingenuous—like I was pretending to be some city kid who had picked Whedon for its proximity to the Pacific, or because I’d heard people in northern California were uncommonly chill.

Really, the campus was as familiar to me as my own backyard.

“The population is over four thousand,” I said. “Four thousand, three-hundred and fifty-five.” I knew the number from a salt-eroded highway sign bearing my hometown’s slogan: RELAX, YOU'RE IN CRESCENT BAY!

“Whoa.” Vanessa had a dramatic habit of lowering her sunglasses every time she wanted to look me in the eye. “You really did your research before deciding on a school.”

“For real?” Her surprise was sincere. “I don’t think I’ve ever met anyone who’s from here.”

“It must be nice to love where you’re from so much, you don’t ever want to leave,” Vanessa said.

I was on the verge of correcting her. My decision to stay in Crescent Bay after graduation—still two months away—couldn’t be reduced to anything as easy as love. Forming an official opinion of this place would have been like trying to articulate my feelings for my thirteen-year-old sister. Obviously, I loved Rosie. We shared a room, a history. We had identical splashes of freckles across the bridges of our slightly oily noses. Almost every day of our lives contained a moment when one or both of our parents said something so off-putting that only a shared look of sisterly commiseration could comfort me. And yet, the last thing I’d said to Ro was, “If you don’t stop leaving your dirty balled-up socks on my bed I will literally carry your entire wardrobe into the yard and set it on fire.”

Toward Crescent Bay, I felt a similar combination of loyalty and irritation—the kind that makes you grind your teeth, exhale through your nose. My tour guide was from a suburb outside of Chicago. I didn’t think she’d really understand, so I just said, “Someday, I’ll leave.”

“Oh, totally. But why rush it? This is the most beautiful place I’ve ever been.”

I nearly thanked her, as if the compliment had been for me and not the landscape. The truth was that I agreed; everyone who stepped foot in our town agreed with Vanessa. The refrain you heard all the time, as families arranged their collapsible chairs in the sand—or as your dad, piloting the minivan, rounded a particularly scenic bend of Highway 101 for the third time that week—was, Does it get any better than this? 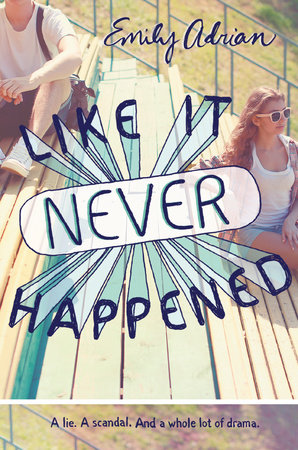