SHARE
+ Add to Goodreads
A thirst for blood, nocturnal debauchery, hypnotic trances ... this is Dracula.

Jonathan Harker is travelling to Castle Dracula to see the Transylvanian noble, Count Dracula. He is begged by locals not to go there, because on the eve of St. George's Day, when the clock strikes midnight, all the evil things in the world will come full sway. But business must be done, so Jonathan makes his way to the Castle - and then his nightmare begins. His beloved wife Meena and other lost souls have fallen under the Count's horrifying spell. Dracula must be destroyed.

5 May.—I must have been asleep, for certainly if I had been fully awake I must have noticed the approach to such a remarkable place. In the gloom the courtyard looked of considerable size, and as several dark ways led from it under great round arches it perhaps seemed bigger than it really is. I have not yet been able to see it by daylight.

When the calèche stopped the driver jumped down, and held out his hand to assist me to alight. Again I could not but notice his prodigious strength. His hand actually seemed like a steel vice that could have crushed mine if he had chosen. Then he took out my traps, and placed them on the ground beside me as I stood close to a great door, old and studded with large iron nails, and set in a projecting doorway of massive stone. I could see even in the dim light that the stone was massively carved, but that the carving had been much worn by time and weather. As I stood, the driver jumped again into his seat and shook the reins; the horses started forward, and trap and all disappeared down one of the dark openings.

I stood in silence where I was, for I did not know what to do. Of bell or knocker there was no sign; through these frowning walls and dark window openings it was not likely that my voice could penetrate. The time I waited seemed endless, and I felt doubts and fears crowding upon me. What sort of place had I come to, and among what kind of people? What sort of grim adventure was it on which I had embarked? Was this a customary incident in the life of a solicitor’s clerk sent out to explain the purchase of a London estate to a foreigner? Solicitor’s clerk! Mina would not like that. Solicitor,—for just before leaving London I got word that my examination was successful; and I am now a ­full-­blown solicitor! I began to rub my eyes and pinch myself to see if I were awake. It all seemed like a horrible nightmare to me, and I expected that I should suddenly awake, and find myself at home, with the dawn struggling in through the windows, as I had now and again felt in the morning after a day of overwork. But my flesh answered the pinching test, and my eyes were not to be deceived. I was indeed awake and among the Carpathians. All I could do now was to be patient, and to wait the coming of the morning.

Just as I had come to this conclusion I heard a heavy step approaching behind the great door, and saw through the chinks the gleam of a coming light. Then there was the sound of rattling chains and the clanking of massive bolts drawn back. A key was turned with the loud grating noise of long disuse, and the great door swung back.

Within, stood a tall old man, clean shaven save for a long white moustache, and clad in black from head to foot, without a single speck of colour about him anywhere. He held in his hand an antique silver lamp, in which the flame burned without chimney or globe of any kind, throwing long quivering shadows as it flickered in the draught of the open door. The old man motioned me in with his right hand with a courtly gesture, saying in excellent English, but with a strange intonation:—

‘Welcome to my house! Enter freely and of your own will!’ He made no motion of stepping to meet me, but stood like a statue, as though his gesture of welcome had fixed him into stone. The instant, however, that I had stepped over the threshold, he moved ­impulsively forward, and holding out his hand grasped mine with a strength which made me wince, an effect which was not lessened by the fact that it seemed as cold as ice—more like the hand of a dead than a living man. Again he said:—

‘Welcome to my house. Come freely. Go safely; and leave something of the happiness you bring!’ The strength of the handshake was so much akin to that which I had noticed in the driver, whose face I had not seen, that for a moment I doubted if it were not the same person to whom I was speaking; so to make sure, I said interrogatively:—

‘Count Dracula?’ He bowed in a courtly way as he replied:—

‘I am Dracula; and I bid you welcome, Mr Harker, to my house. Come in; the night air is chill, and you must need to eat and rest.’ As he was speaking he put the lamp on a bracket on the wall, and stepping out, took my luggage; he had carried it in before I could forestall him. I protested but he insisted:—

‘Nay, sir, you are my guest. It is late, and my people are not available. Let me see to your comfort myself.’ He insisted on carrying my traps along the passage, and then up a great winding stair, and along another great passage, on whose stone floor our steps rang heavily. At the end of this he threw open a heavy door, and I rejoiced to see within a ­well-­lit room in which a table was spread for supper, and on whose mighty hearth a great fire of logs flamed and flared.

The Count halted, putting down my bags, closed the door, and crossing the room, opened another door, which led into a small octagonal room lit by a single lamp, and seemingly without a window of any sort. Passing through this, he opened another door, and motioned me to enter. It was a welcome sight; for here was a great bedroom well lighted and warmed with another log fire, which sent a hollow roar up the wide chimney. The Count himself left my luggage inside and withdrew, saying, before he closed the door:—

‘You will need, after your journey, to refresh yourself by making your toilet. I trust you will find all you wish. When you are ready come into the other room, where you will find your supper prepared.’

The light and warmth and the Count’s courteous welcome seemed to have dissipated all my doubts and fears. Having then reached my normal state, I discovered that I was half famished with hunger; so making a hasty toilet, I went into the other room.

I found supper already laid out. My host, who stood on one side of the great fireplace, leaning against the stonework, made a graceful wave of his hand to the table, and said:—

‘I pray you, be seated and sup how you please. You will, I trust, excuse me that I do not join you; but I have dined already, and I do not sup.’

I handed to him the sealed letter which Mr Hawkins had entrusted to me. He opened it and read it gravely; then, with a charming smile, he handed it to me to read. One passage of it, at least, gave me a thrill of pleasure:

‘I much regret that an attack of gout, from which malady I am a constant sufferer, forbids absolutely any travelling on my part for some time to come; but I am happy to say I can send a sufficient substitute, one in whom I have every possible confidence. He is a young man, full of energy and talent in his own way, and of a very faithful disposition. He is discreet and silent, and has grown into manhood in my service. He shall be ready to attend on you when you will during his stay, and shall take your instructions in all ­matters.’

The Count himself came forward and took off the cover of a dish, and I fell to at once on an excellent roast chicken. This, with some cheese and a salad and a bottle of old Tokay, of which I had two glasses, was my supper. During the time I was eating it the Count asked me many questions as to my journey, and I told him by degrees all I had experienced.

By this time I had finished my supper, and by my host’s desire had drawn up a chair by the fire and begun to smoke a cigar which he offered me, at the same time excusing himself that he did not smoke. I had now an opportunity of observing him, and found him of a very marked physiognomy.

His face was a strong—a very strong—aquiline, with high bridge of the thin nose and peculiarly arched nostrils; with lofty domed forehead, and hair growing scantily round the temples, but profusely elsewhere. His eyebrows were very massive, almost meeting over the nose, and with bushy hair that seemed to curl in its own profusion. The mouth, so far as I could see it under the heavy moustache, was fixed and rather ­cruel-­looking, with peculiarly sharp white teeth; these protruded over the lips, whoseremarkable ruddiness showed astonishing vitality in a man of his years. For the rest, his ears were pale and at the tops extremely pointed; the chin was broad and strong, and the cheeks firm though thin. The general effect was one of extraordinary pallor.

Hitherto I had noticed the backs of his hands as they lay on his knees in the firelight, and they had seemed rather white and fine; but seeing them now close to me, I could not but notice that they were rather coarse—broad, with squat fingers. Strange to say, there were hairs in the centre of the palm. The nails were long and fine, and cut to a sharp point. As the Count leaned over me and his hands touched me, I could not repress a shudder. It may have been that his breath was rank, but a horrible feeling of nausea came over me, which, do what I would, I could not conceal. The Count, evidently noticing it, drew back; and with a grim sort of smile, which showed more than he had yet done his protuberant teeth, sat himself down again on his own side of the fireplace. We were both silent for a while; and as I looked towards the window I saw the first dim streak of the coming dawn. There seemed a strange stillness over everything; but as I listened I heard as if from down below in the valley the howling of many wolves. The Count’s eyes gleamed, and he said: –

‘Listen to them—the children of the night. What music they make!’ Seeing, I suppose, some expression in my face strange to him, he added:—

‘Ah, sir, you dwellers in the city cannot enter into the feelings of the hunter.’ Then he rose and said:—

‘But you must be tired. Your bedroom is all ready, and tomorrow you shall sleep as late as you will. I have to be away till the ­afternoon; so sleep well and dream well!’ and, with a courteous bow, he opened for me himself the door to the octagonal room, and I entered my bedroom. 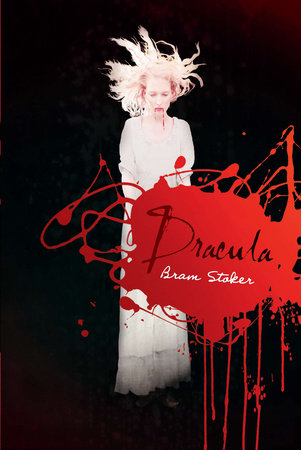