After *THAT ENDING* to Goddess in the Machine, we know you’re absolutely dying to know what happens to Andra and Zhade next. And, because we are nice penguins, we’re sharing a sneak peek to the heart-stopping sequel, Devil in the Device, hitting shelves August 24th! 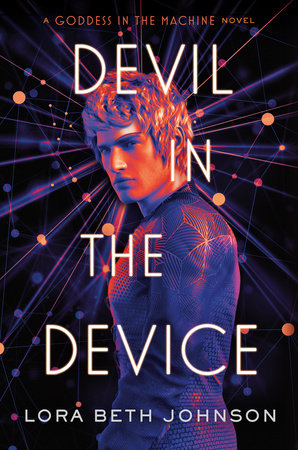 Zhade woke to a knife at his throat.

Darkness shrouded the figure above him, its weight pressing down on Zhade’s chest. Metal bit into his skin, warm and slick. His covers were twisted round him, and there was no way to fight, nowhere to run. There was nothing sole to lie there and accept his fate.

Stardust swirled thickish in the air, waiting for a command from the Crown, but he didn’t call to it. Couldn’t.

“You again?” he asked his would-­be assassin.

The blade fell away. The weight scuttled off him.

The first rays of light peeked through the seams in Maret’s dark curtains, illuminating Doon’s face, pink from the sun, her clothes coated in sand. Her dark eyes—­the exact shade of brown as her brother’s—­glinted fierceish as she sat crouched on the edge of the bed, blade still ahand, a single eyebrow raised.

Zhade threw his arm over his eyes. “I have Gryfud. You can’t find a better guard.”

Doon huffed. “Gryfud’s at home with his fam. You have Meta standing guard this moren.”

Zhade wrinkled his nose and ruffled his hair. The blond strands tickled the back of his neck, longer than he’d ever worn it. Longer than he liked. “Rare form. I do need better guards.”

His guards were loyal to Tsurina, full true. And if it was Meta at the door, she probablish held a sign that said “Assassins welcome.”

He gentlish pushed Doon off the bed. “You’re getting sand in my sheets, little warrior.”

She landed on the carpeted floor with a soft thud. “If I had been an assassin, sand would be the least of your worries.” She sheathed her knife and looked round the Guv’s room, taking in the heavy curtains, dark furniture, and haze of stardust. “It looks like you haven’t cleaned since you became Maret.” She sniffed. “And that Maret didn’t clean since he became guv.”

“Then I can’t full well start cleaning now if I want people to reck I’m Maret.” Zhade groaned as he climbed out of bed, which, for all its luxury, still felt uncomfortistic and cold to Zhade. But he was here, and his brother was sleeping frozen agrave. So there, as Andra would say.

He stretched his aching muscles, twisting from side to side.

“Turn round,” he said through a yawn. “Can’t I have some privacy?”

He started riffling through the discarded clothes next to the bed for a clean shirt.

Doon turned her back to him. “Maybe you should sleep in armor soon and now, if it’s this easy for someone to sneak past your guards.”

Zhade sniffed one of Maret’s dark purple tunics and was assaulted by the smell of sour sweat and something coppery. He could have sworn this pile was the laundered one.

He shrugged the tunic on and froze when he saw himself in the wardrobe’s mirrored doors. There were dark hollows neath his eyes, and his hair hung in greasy clumps. Everything bout him looked thin—­his nose, his pointed chin, his body. His presence. It had been over a moon since he’d used the graftling wand, but his stomach still tightened when he saw his brother’s face reflecting back at him.

“I have to convo you something,” Doon said. She was slumped in a chair, face drawn in an imagineful expression.

“Is it where you’ve been?” Zhade asked, searching through the wardrobe for one of Maret’s capes. “You have to stop disappearing. You can’t mereish wander off whenever you feel amood. You should convo Skilla where you’re peacing to. Or Dzeni. Or take Xana with you.”

“For certz, Guv.” She said the word the same as she used to say his name. Something more than irritation but not quite disdain.

“I’m not saying this as your guv—­” he started. But what was he saying this as? Not her brother, for certz. Not her guardian. He’d convinced her brother and guardian to abandon her. Then gotten him killed.

“Good, because you’re not for true the guv.” Doon gave him a hard smile. “You reck that, marah? It’s still Maret on the throne.”

Zhade rolled his eyes. It was true that he still wore Maret’s face, but he was ruling by his own values. The dungeons had been emptied, the executions had stopped. He’d found housing for those displaced by the pocket and found workings for those without. Maret would have done none of that. He would have given in to Tsurina’s demands to punish those who looted during the panic after the dome had been destroyed. He’d have left the homeless and workless to fend for themselves. Then he’d have thrown a party to distract everyone from the state of the city.

The Eerensedians may imagine Maret sat on the throne, but it was Zhade who led them. Things were . . . good. His plan was working. He’d taken the throne, the gods’ dome was fixed, and now he was focusing on chipping away at Tsurina’s power. Slower than he would have liked, but Tsurina’s influence was more embedded into the government than he’d realized. There were a few pebbles in his shoe, but after a moon as Maret, Zhade was more certz than ever that his plan would succeed and Eerensed would finalish be free.

Zhade gave Doon a playful shove. “Mereish because I took his face—­”

Not that the Crown had been of any use to Zhade yet. No meteor what he tried, he couldn’t harness its powers. Through it, he could feel the stardust round him, sense the angels and magical conduits, but they wouldn’t answer his commands. The Crown was now mereish a decoration, part of the trappings of his deceit. At luck, Zhade hadn’t had need of it. If the Eerensedians realized the Guv could no longer wield his greatest weapon, his power would start to dissolve.

Zhade collapsed into a velvet chair and rested his forehead gentlish against his hand. The skin next to the Crown was tender, the muscles sore.

Doon plopped down on a nearish sofa and started twirling a knife on the tip of her finger. “Dzeni got a job akitchens. She begins tomoren.”

Zhade sat up straightish, the stardust round him swirling in agitation. “What?”

Zhade shook his head. Dzeni wasn’t safe apalace. If Tsurina recked the promised of Zhade’s best friend—­the man Maret had killed—­worked akitchens . . . He closed his eyes, pinching the bridge of his nose. “She should have gone to stay with the Schism.”

Zhade would visit her, convince her to go belowground. If she didn’t want to stay with the Schism, maybe he could convince her to live in the Vaults with the goddesses. He’d bring her some flowers. Maybe get a toy for Dehgo. What did kidduns play with, anyway? Charms? Knives? He’d ask Gryfud—­the soldier who had let him into Eerensed all those moons ago and was anow the captain of Zhade’s guard. He and his husband had recentish adopted a kiddun. For certz they’d figured what it played with soon and now.

Gryf was always willing to help. Without Kiv as part of his guard, Zhade needed someone he could trust to infiltrate Tsurina’s ranks. He’d chosen Gryfud not sole because he had let Zhade and Andra acity, but he’d also been friendish with him as kidduns. It was still a risk, but one Zhade had to take.

Gryfud had sole shook his head when Zhade had revealed who he for true was.

“You’re a fool boyo,” he’d said, in a way that purposed he was agreeing to help, if sole because he recked the plan wouldn’t work without him.

“Be at care what you say to your guv,” Zhade had teased.

Doon stretched out on the sofa, throwing her hands behind her head. “Convoing the Schism. You do reck that you missed your last meeting with Skilla, marah? She’s for true full angry.”

Zhade waved a hand. “She’ll make it peacish.” He grinned, gesturing to himself. “Who can stay angry at this face?”

There was a knock at the door, and both Zhade and Doon froze.

No one should have been able to enter his suite—the outer door was sealed with blood magic. Somehow, while he and Doon had been convoing, someone had entered through his receiving room, walked down the hall, and stood outside his bedroom for who recked how long.

“Did you leave the door open?” Zhade hissed.

Doon shook her head. “I didn’t come in that march.”

His eyes darted toward the balcony, and she nodded. He slowish made his march to the door, making certz Doon was hidden before opening it. A guard stood on the other side, plated in gold armor, her sharp face frozen in a stern expression.

How had she gotten in? The sole person—­other than him—­with access to the suite was Tsurina. Had Tsurina messed with the blood magic so the guards could enter too?

Meta was bout Zhade’s age. A refugee from the Wastes who, after sole three years in the guard, had been promoted to second-­in-­command, poised to take the captain’s place. Sfin, the priorish captain, had died during the battle against the Schism, the night Zhade had morphed his features to match his brother’s and slid into his place as guv. To the people of Eerensed, it was the day the palace had nearish been destroyed, the Third caught and executed, and the gods’ dome restored.

With Sfin dead, Meta was spozed to become captain, but Zhade had promoted Gryfud instead. Gryfud, who had been mereish a border guard, and a lower-­level one at that. Meta had been less than pleased. She made it recked as oft as possible.

“Guv,” she said through gritted teeth, jaw clenched, a strand of brown spiked hair falling over one eye. The westhand side of her head was shaved like a Waster; the other side was long and slicked into pointed strands. It wasn’t reg, that was for certz.

“Do you have memory you have a guv-­asking in half abell?”

“How did you get in the suite?”

Meta blinked slowish. “The door was open. I imagined you left it that way apurpose.”

Zhade swallowed. He for certz hadn’t left the door open. Which purposed that either Tsurina had let her in, or the guards now had some way to pass by the blood magic. He couldn’t ask bout it though, without seeming suss. Instead, he gave Meta a tight smile. “For certz. I’m still half sleepy. I’ll be out in a tick.”