Excerpt alert! This week we’re reading The Jewel Thief by Jeannie Mobley, a lush, slow-burn romance set in 17th century France, and based on the history of the Hope Diamond. Scroll down to read an excerpt! 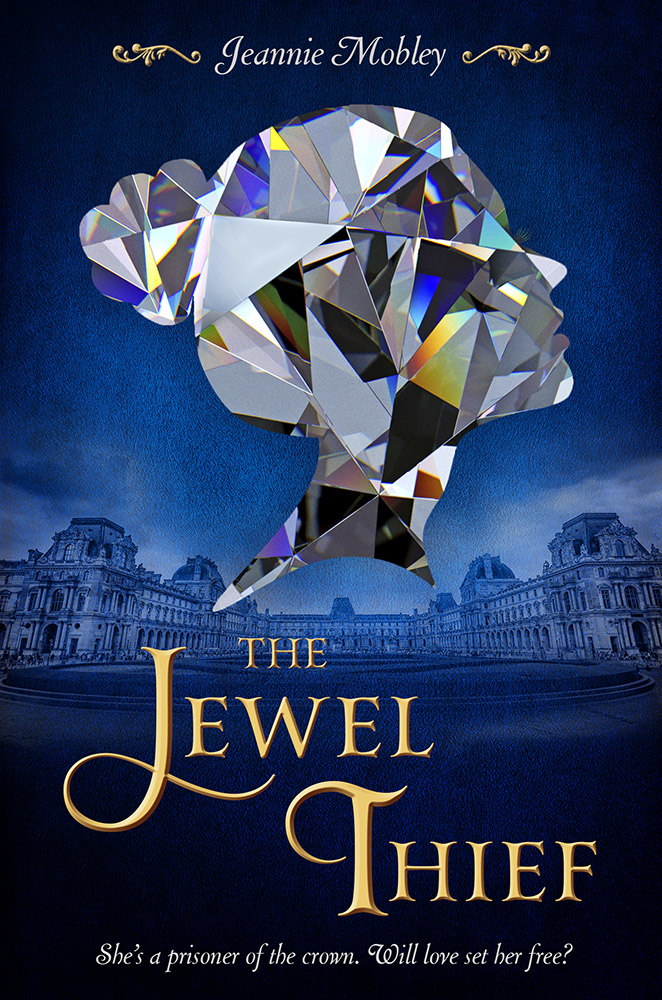 I kneel, gritting my teeth against the pain of my cracked ribs and blistered hand. The hard, cold edge of the marble step bites into my knees as the king’s glare forces me down against it. Such cruel irony. I am exactly where I’d planned to be on this day, kneeling before the glory of Louis XIV, but so very far from the victory I’d envisioned. I should be here with my father, beauty beyond imagining in hand. Instead, I am chained and beaten, a delicious spectacle for this heartless court, and Papa—well, who knows exactly where Papa is. I pray to the Virgin and every saint in heaven that he is finishing our grand project and not lying in a drunken stupor somewhere, rendering all our hard work and sacrifice in vain.

“Juliette Pitau.” The king’s voice draws me out of my prayer. He rolls my name slowly across his tongue as he might an old wine, deciding if there is any sweetness to it, or if it has soured to vinegar.

I raise my eyes to his gleaming presence. Louis XIV is all that he claims to be—the living sun—ablaze with the fire of his own vanity. Black-clad ministers orbit him, their muted coats and manners only sharpening his brilliance. When they glance my way, they register cold indifference to colder disdain, but I don’t care. The king alone matters. He alone will sanction death, and how much pain I will endure before it comes.

He alone is the one I must defy.

I clench my teeth and dare a glance at his face. A mistake, I realize too late. He snares my eyes with his own and I cannot look away. Knowing I am pinned, he smiles and leans back in his gilded chair, luxuriating in his power to hold me dangling, poised to fall the moment he wills it. He stretches out one silkhosed leg, allowing the court to admire his strong, curving calf, his shapely ankle, and, of course, his stylish, well-heeled shoe with its preposterously large bow.

“Juliette Pitau,” he says again, his voice languid like a cat lazily stretching, flexing its claws. “I am waiting for an answer.”

I swallow and draw a breath. I have prepared an answer, though I know it is not the one he wants. I force out the trembling words. “I confess to all charges, Your Majesty. I alone am guilty.”

His smirk tightens ever so slightly. “It seems to me, Mademoiselle Pitau, that you are at the center of a large conspiracy.”

My heart contracts with fear and my words tumble out too quickly. “No, Your Majesty. The others are innocent. They had no knowledge—”

“Where is my diamond, Juliette?” My name cracks like a whip on his tongue.

I swallow again as desperation flares through my body. Doubtless, the king can hear it in the quiver of my voice. But this is my only chance. “You will have it, Your Majesty. If you will only give us two days! All we have done is for your glory. You will shine like the sun, I assure you!”

His eyebrows raise in their exquisite arch, his control tucked neatly back into place. “Do I not shine like the sun already?” He shifts, letting the gold embroidery on his velvet robes catch the light. Rubies and diamonds flash from every finger.

“You are le Roi-Soleil,” I reply, obediently. The Sun King, resplendent in his jewels and power. “The day you came into power is the day the sun rose on all of France.”

Amusement ripples across his features, and I realize I have slipped into a trap. Like a cat, he will play with me for a time before the fatal blow.

“And your father?” Louis asks. “Did the sun rise on him too?”

I grit my teeth again. What answer does he expect me to make? The mouse never knows the rules of the cat’s game, except, perhaps, that it can’t win. All I can think is to repeat a warning I should have heeded a year ago. “If you are the sun, Your Majesty, my father is Icarus.”

“Ah, Icarus, who flew too close to the sun in his waxen wings and fell. Do you expect my pity, mademoiselle?”

A single tear falls down my cheek before I can stop it. “My father believed he was doing your bidding, Your Majesty.” It’s what I should have said before.

“And was that your intent too? To do my bidding?”

I lower my gaze to the enormous bows on his shoes, hoping humility will lend credence to my answer. “Yes, Your Majesty.”

“Then tell me where the diamond is!” he demands, slamming a fist on the arm of his chair. The assembled ministers jump, puppets on a single string.

I jump too. Pain explodes along my ribs where I was kicked mercilessly the night before. My hand jerks instinctively toward my side, but the chains that bind my hands deny me that comfort.

“Spain, perhaps? Were you working for Charles of Spain?” the king asks, pulling my attention back.

“Our work has been for you and no other, Your Majesty,” I assure him, though my mouth is nearly too dry to speak.

Choosing words wisely has never been my talent, but I struggle forward. “The diamond is not ready, Your Majesty. Give my father two more days and you will have it. I swear on the Virgin Birth, I am telling the truth.”

“You will forgive me if I have little confidence in your claims of truth,” he says.

I raise my eyes to his again. Such boldness could cost me dearly, but he must see my sincerity. “If you will grant us the time, I will confess all and the diamond will be returned more glorious than you can imagine.”

His lip curls in an arrogant smile. “You underestimate my imagination, mademoiselle.”

I smile back, dangerously matching his arrogance, knowing I do not. “Two days, Your Majesty. Please.”

“And if I do not grant you that time?”

“Then I will tell you nothing and your diamond will be lost.” The words are out before I can stop them, but even as I speak, I know I have gone too far. If stealing the diamond didn’t solidify my fate, my impudence surely will.

The king throws back his head and laughs so hard it sets the long black ringlets of his wig bouncing. His ministers try to join in, but they cannot seem to muster more than a nervous tittering.

As for me, I must clench every muscle in my aching body to remain still.

“I have no need of your bargains, mademoiselle,” the king says when his mirth has died away at last. “Monsieur Colbert, have the charges read. She is wasting my time.”

“Yes, Your Majesty,” Jean-Baptiste Colbert says with a reproachful glance at me. I have known him since childhood, when his frequent visits to Papa’s workshop were accompanied with bonbons for my brother and me, but his loyalty to Louis makes him now as cold as the rest. He turns and nods to a clerk, who steps forward from the shadows, breaking my heart all over again.

How could they be so cruel as to give this job to René? Dear, kind, gentle René. Of everyone I have hurt he deserves it the least. I squeeze my eyes shut and bite my lip to hold back the sob that rises in my throat, but his voice, hard and indifferent, tears a deep gash in my defiance, and I cannot hold my anguish.

“Juliette Pitau, you are herewith charged in the court of His Majesty King Louis XIV of France with consorting with Jews, conspiracy with known traitors, theft from the treasury of France, and high treason against the king.”

The room falls silent when he has finished. Hot tears slide down my cheeks.

At last, the king speaks. “You do not deny these charges?”

“I deny treason, Your Majesty. Of the rest, I am guilty.”

The king stands. “Take her away.”

The guards who brought me and forced me to my knees now grip my arms and haul me upright again. I lift my head at last and wince to find myself eye-to-eye with Louis, who rises from his gilded throne to get the last word.

He steps forward, and tilts my face upward to his with a painful grip on my jaw. The large ruby on his finger, a stone that I myself polished for his pleasure, bites into my throat. His breath is hot and foul on my face.

“Be assured, Juliette Pitau. Before you die, you will tell me what you have done with my diamond.”