Unless you’ve been trapped inside the Martial Empire’s Kauf Prison, you’ve probably heard that An Ember in the Ashes is getting a beautiful collector’s edition this fall! Exclusively at Barnes & Noble, this must-have edition (available in HARDCOVER) contains never-before-seen content that will have even the most diehard Ember fan swooning.

Here are five reasons why you should order the collector’s edition (did we mention it’s HARDCOVER?), plus a few extra spoiler-y reasons for the most diehard Emberlings. 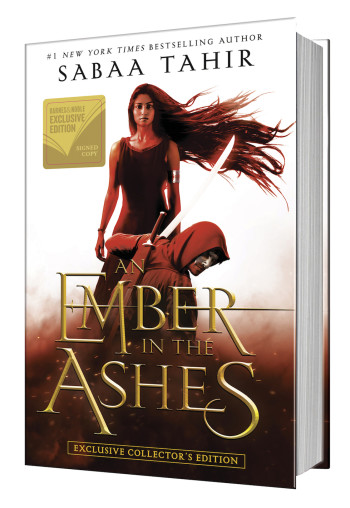 You asked. We listened. Now, you’ll finally be able to own the gorgeously redesigned An Ember in the Ashes in hardcover! Make room on your shelf, because the Ember Quartet books are going to look SO. FORKING. PRETTY. TOGETHER.

2. It takes you back to the beginning of it all.

Are you a new reader who’s wondering what all the Ember hype is about? If you order the collector’s edition, you’ll finally be able to join Team Ember and share in our pain:

The cycle of reading a @sabaatahir book:

9PM: I'll go to sleep after this chapter.

2AM: omg Sabaa you did NOT

4AM: Officer, honest, I don't normally camp outside bookstores but the thing is the bookstore has the sequel and I do not

Don’t worry. We’ll always be here for you.

There’s nothing more special than seeing your favorite character jump off the page for the first time in fan art. That’s why we’re excited so excited that the collector’s edition will include custom fan art from an artist who’s been personally selected by Sabaa Tahir herself!

Will your favorite Ember fan art make it into the collector’s edition?

4. Straight from Blackcliff, it has a letter from Elias Veturius.

Oh, Elias. Why must you suffer so much sorrow? If you’re looking for the latest news on your favorite Martial hero, the collector’s edition will contain an exclusive letter written by Elias Veturius himself. (Let’s just hope Sabaa lets him survive long enough to deliver it…)

5. It’s signed by the Queen herself.

Sabaa Tahir will be signing ALL of the collector’s editions. ‘Nuff said.

If you’re still wondering why you should order the collector’s edition, we have a few extra reasons that are VERY SPOILER-Y. So if you haven’t read any of the Ember Quartet books yet, STOP HERE! (Otherwise, we cannot be held responsible if the Nightbringer shows up at your doorstep and vanishes you into the everlasting night.)

If you’ve read the Ember sequels, you’ll know what we’re talking about. The collector’s edition will propel you back to the beginning of the saga, before all the madness… and the bloodshed. *sniffs*

7. Revisit characters who are not what they seemed.

Remember Keenan and Cook, before you know who they really were? The collector’s edition presents the perfect throwback to who they were before their true identities were revealed. See if you can spot the tiny clues that led into those jaw-dropping revelations in A Torch Against the Night and A Reaper at the Gates.

8. Experience the magic of Elias and Laia’s first kiss.

The Ember series has more romantic moments than you’d think (despite the constant bloodshed), and one of the best moments is still Elias and Laia’s first kiss in An Ember in the Ashes. The collector’s edition will take you back to that special scene in its simple, passionate, pre-heartbreak glory.

The collector’s edition of An Ember in the Ashes arrives exclusively at Barnes & Noble on October 15, 2019. Pre-order your copy now!