Read an excerpt of THE GIRLS ARE NEVER GONE

One of fall’s scariest reads is creeping just around the corner, but beware: we’re sharing an excerpt today! Scroll down to begin reading The Girls Are Never Gone by Sarah Glenn Marsh. The Conjuring meets Sadie in this queer ghost story, when seventeen-year-old podcaster Dare finds herself in a life-or-death struggle against an evil spirit! 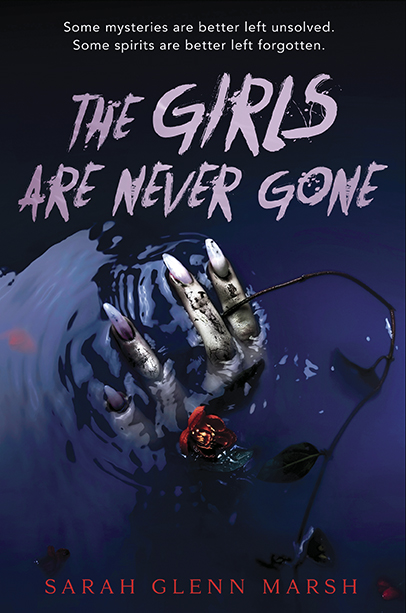 Once we’ve crossed the bridge, we take another dirt road, this one less traveled. The path ahead is studded with the occasional rock that makes Mom gasp when it plinks against the windshield. At last, we reach the base of the gentle slope up to the house and begin a slow crawl along the driveway. Paradise Lake looks murkier up close, less pristine than it did from above on the bridge, as it laps at the shore to our left.

You’d think the water in a lake called Paradise would be a little less muddy.

Out my window is a wooded field. Most of the trees have been reduced to stumps poking out of the earth like jagged teeth, no doubt waiting to be ground to dust to make way for a visitors’ parking lot.

The house itself watches our approach through shattered eyes, having taken a few rocks to its front windows. It’s just as big as the beast it appeared to be in pictures, though less polished. It crouches against the trees that flank it on either side, as if trying to disappear into the sprawling woods, afraid of someone seeing the slight sag in its double-­story columned porch, the lingering graffiti stark on its white, peeling sides, the overgrown lawn, the moss that clings patchily to its shingles. Behind the house, farther away than they appear, the mountains, those huddled blue giants, see everything.

Was Atheleen Bell happy to see this place when her family arrived? Did she flash her wide, carefree smile, imagining thesummer adventures she’d have on the grounds? Did she—­like I soon would—­shoulder her bags and stride eagerly toward the porch, her little black-­and-­white cat at her side? Or did she shrink back from the sight of the neglected building starved for love? Perhaps it looked less forbidding in her day, even though it was old back then, too.

By the time Mom stops the car as close to the front door as she seems willing to get, the afternoon clouds covering the sun have stained the mountains the deep plum of a bruise. I lean against her, inhaling the familiar scents of coffee, dog dander, and spring meadow fabric softener—­of home.

“You’re sure you want to do this, baby girl?” she asks softly, frowning up at the house.

“You’re just salty because you’re going to miss my cooking for a whole month, and you’ll have to order takeout every night,” I try to tease, but as I follow her gaze, my voice gets smaller until it vanishes altogether.

There are secrets in that house, concealed by cracked paint and faded grandeur. Who knows what I might dig up during the renovation process ahead? Perhaps evidence about the life and death of a girl my age—­and I’m ready to explore. I’m not leaving without some insight into Atheleen’s final days and a bigger follower count.

The Arrington Estate is a dark place, but I like the dark. It’s content, it’s quiet and empty. Just as I’ve done so many times before, I’ll reach out into the darkness, safe in knowing nothing ever reaches back.

Looking for more intense reads? Prepare yourself for Dark and Shallow Lies by Ginny Myers Sain with this list!