Diving into Rebel Sisters by Tochi Onyebuchi this week? We’ve got you covered with our recap of what happened in the first book in the duology, War Girls! 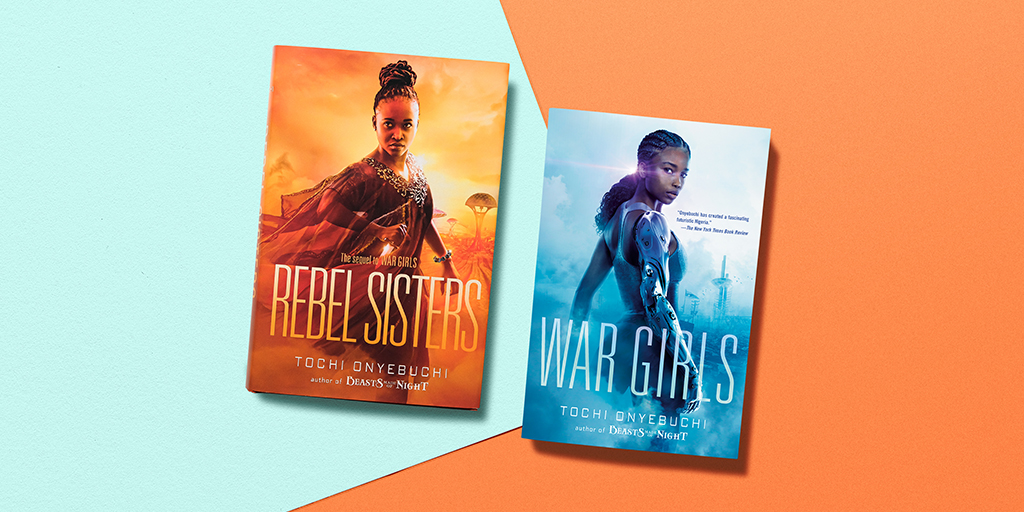 As War Girls begins, the future is a time of strife. Civil war rages between Nigeria and the fledgling Republic of New Biafra. Sixteen-year-old Onyii fights for the Biafran rebels as part of the War Girls, a squad of teen soldiers who protect other Biafran refugees, including Onyii’s younger sister, ten-year-old Ify. Ify is a tech genius and invented a device called the Accent, which is implanted in her ear and can co-opt wireless networks. Her Accent can also control any kind of weapons tech, including the Gundam Wing–like mech suits that both Nigerians and Biafrans use as part of their military campaigns.

While Onyii oversees day-to-day security for the refugee camp alongside the other War Girls, primary care of Ify falls to an android named Enyemaka, who serves as her governess, of sorts. But in war, battle lines never remain fixed, and soon the War Girls’ camp is caught in the line of fire. The Nigerian Armed Forces bomb the refugee camp, and in the aftermath Onyii and Ify are separated. Both believe the other to be dead.

Over the next four years, the two sisters grow up on opposite sides of the war. Ify grows up in Nigeria as the adoptive sister of Daren, a teen prodigy Nigerian mech-suit pilot who’s built a reputation for himself as the Great Protector of Nigeria. Unbeknownst to Ify, Daren is also the soldier who, years ago, was responsible for severing Onyii’s right arm (big yikes). That’s the same injury that forced Onyii to get a cybernetic replacement arm.

Meanwhile, Onyii has become a feared Biafran operative known as the Demon of Biafra, winning victory after bloody victory on the battlefield for the Biafrans in her mech suit. She doesn’t relish her nickname, though. All she wants to tell her friends is, “There is no Demon of Biafra. There’s just a War Girl.”

In a move to expose the colonial powers that purport to be neutral but are in fact funding Nigeria’s war machine, Onyii and the War Girls besiege a Nigerian installation. In doing so, they publicly reveal that Nigeria has been sponsored by the Commonwealth Colonies, thus forcing Nigeria to declare a ceasefire with the Biafrans and accept a peace treaty with Biafra.

However, the War Girls’ victory is not without consequences, for Ify’s Accent tech is inadvertently implicated in Onyii’s attack on the Nigerian installation. Ify is brought to trial and is exiled from Nigeria. She asks Daren to remove her Accent from her ear… though not before it reveals that she’s not actually Onyii’s biological sister.

It turns out that when Ify (who is in fact Nigerian) was very young, Onyii killed Ify’s parents during a military raid on their village. However, she couldn’t bring herself to kill Ify, so instead she brought Ify back to the War Girls camp and raised her as her sister. If the two “sisters” ever cross paths again… Onyii has some explaining to do.

The peace between Nigeria and Biafra doesn’t last. Only nine months in, the peace treaty collapses entirely when Daren schemes to bomb a Biafran city using Ify as a Trojan horse. Ify, meanwhile, has decided to avenge her parents’ murders by killing Onyii. However, Ify has a change of heart when Onyii is caught in the crosshairs of Daren’s bombing.

Peacetime brings some developments to Onyii, as she grows close to one of her fellow War Girls, Chinelo. However, their romance sadly doesn’t progress very far, as Chinelo is seriously injured in the bombing and is rendered into a coma.

Meanwhile, it’s revealed that Enyemaka has survived for the past few years, if barely. Enyemaka crosses paths with a scientist named Dr. Liu Xifeng, a Chinese aid worker and videographer who is documenting stories of what really happened in the war between Nigeria and Biafra. In doing so, Xifeng hopes to convince people from other countries to care about what’s happening there.

In a climatic battle in their mech suits, Onyii kills Daren, and then she and Ify ultimately decide to leave everything behind. Both are wanted for war crimes in Nigeria and Biafra, so the two of them decide to seek refuge in the Space Colonies, away from the continuing war that’s engulfed their home. But while they’re escaping out of the country, Onyii and Ify become infected with radiation poisoning in the Redlands.

With Xifeng’s help, Onyii manages to get Ify medical treatment about a transport that’s bound for the Space Colonies. But Onyii doesn’t go with her, as her own poisoning has progressed too far… and she has less than two weeks left to live. While Ify sets off to begin her new life among the stars, Onyii elects to stay behind and spend the rest of what little time she has left on Earth. When Xifeng asks her why, Onyii replies, “I couldn’t let Ify watch me die like that. I want her last sight of me to be of me whole. That’s how I want to be remembered.” And that’s how War Girls ends.

There you have it. But the story is far from over, as Rebel Sisters picks up five years later when Ify returns to the still devastated Nigeria to find out what’s causing a mysterious virus that’s spread through the Space Colonies. What will Ify find during her homecoming? You’ll have to read Rebel Sisters to find out!

Rebel Sisters is on shelves now! Check out the other epic books that are also landing on shelves this month