More Formats:
SHARE
+ Add to Goodreads
The beloved and award-winning novel now available in a new format with a great new cover!

When Wesley Boone writes a poem for his high school English class, some of his classmates clamor to read their poems aloud too. Soon they're having weekly poetry sessions and, one by one, the eighteen students are opening up and taking on the risky challenge of self-revelation. There's Lupe Alvarin, desperate to have a baby so she will feel loved. Raynard Patterson, hiding a secret behind his silence. Porscha Johnson, needing an outlet for her anger after her mother OD's. Through the poetry they share and narratives in which they reveal their most intimate thoughts about themselves and one another, their words and lives show what lies beneath the skin, behind the eyes, beyond the masquerade.

"A flowing, rhythmic portrait of the diversity and individuality of teen characters in a classroom in Anywhere, U.S.A. . . . As their stories unfold and intertwine with those of their classmates, readers are able to observe changes in them and watch the group evolve into a more cohesive unit. . . . Competent and reluctant readers alike will recognize and empathize with these teens. As always, Grimes gives young people exactly what they're looking for--real characters who show them they are not alone."--SLJ

"Funny and painful, awkward and abstract, the poems talk about race, abuse, parental love, neglect, death, and body image. Most of all, they try to reveal the individuals beyond the stereotypes. . . . Readers will enjoy the lively, smart voices that talk bravely about real issues and secret fears. A fantastic choice."--Booklist

"All of the [students], black, Latino, white, male, and female, talk about the unease and alienation endemic to their ages, and they do it in fresh and appealing voices.  Rich and complex."--Kirkus

"Grimes's creative, contemporary premise will hook teens, and the poems may even inspire readers to try a few of their own."--Publishers Weekly

I ain’t particular about doing homework, you understand. My teachers practically faint whenever I turn something in. Matter of fact, I probably got the longest list of excuses for missing homework of anyone alive. Except for my homey Tyrone. He tries to act like he’s not even interested in school, like there’s no point in studying hard, or dreaming about tomorrow, or bothering to graduate. He’s got his reasons. I keep on him about going to school, though, saying I need the company. Besides, I tell him, if he drops out and gets a J.O.B., he won’t have any time to work on his songs. That always gets to him. Tyrone might convince everybody else that he’s all through with dreaming, but I know he wants to be a big hip-hop star. He’s just afraid he won’t live long enough to do it. Me, I hardly ever think about checking out. I’m more worried about figuring what I want to do if I live.

Anyway, I haven’t had to drag Tyrone off to school lately, or make excuses for not having my homework done, because I’ve been doing it. It’s the Harlem Renaissance stuff that’s got us both going.

We spent a month reading poetry from the Harlem Renaissance in our English class. Then Mr. Ward—that’s our teacher—asked us to write an essay about it. Make sense to you? Me neither. I mean, what’s the point of studying poetry and then writing essays? So I wrote a bunch of poems instead. They weren’t too shabby, considering I’d only done a few rap pieces before. My favorite was about Langston Hughes. How was I to know Teach would ask me to read it out loud? But I did. Knees knocking like a skeleton on Halloween, embarrassment bleaching my black cheeks red, eyes stapled to the page in front of me. But I did it, I read my poem.

Guess what. Nobody laughed. In fact, everybody thought it was cool. By the time I got back to my seat, other kids were shouting: “Mr. Ward, I got a poem too. Can I bring it in to read?”

Teach cocked his head to the side, like he was hearing something nobody else did. “How many people here have poems they’d like to read?” he asked. Three hands shot up. Mr. Ward rubbed his chin for a minute. “Okay,” he said. “Bring them with you tomorrow.”

After class Teach came over to my desk. “Great poem,” said Mr. Ward. “But I still expect to see an essay from you. I’ll give you another week.” So much for creative expression.

Trumpeter of Lenox and 7th
through Jesse B. Semple,
you simply celebrated
Blues and Be-bop
and being Black before
it was considered hip.
You dipped into
the muddy waters
of the Harlem River
and shouted “taste and see”
that we Black folk be good
at fanning hope
and stoking the fires
of dreams deferred.
You made sure
the world heard
about the beauty of
maple sugar children, and the
artfully tattooed backs of Black
sailors venturing out
to foreign places.
Your “Sweet Flypaper of Life”
led us past the Apollo and on
through 125th and all the other
Harlem streets you knew like
the black of your hand.
You were a pied-piper, brother man
with poetry as your flute.
It’s my honor and pleasure to salute
You, a true Renaissance man
of Harlem.

School ain’t nothin’ but a joke. My moms don’t want to hear that, but if it weren’t for Wesley and my other homeys, I wouldn’t even be here, aiight? These white folk talking ’bout some future, telling me I need to be planning for some future—like I got one! And Raynard agreeing, like he’s smart enough to know. From what I hear, that boy can’t hardly read! Anyway, it’s them white folk that get me with all this future mess. Like Steve, all hopped up about working on Broadway and telling me I should think about getting with it too. Asked me if I ever thought about writing plays. “Fool! What kinda question is that?” I said. He threw his hands up and backed off a few steps. “All I’m saying is, you’re a walking drama, man. You got that down pat, so maybe you should think about putting it on paper.” When that boy dyed his hair, I b’lieve some of that bleach must’ve seeped right into his brain. I grind my teeth and lower my voice. “Boy, get out my face,” I tell him. He finally gets the message and splits. I’m ticked off that he even got me thinking about such nonsense as Broadway.

White folk! Who they think they kidding? They might as well go blow smoke up somebody else’s you-know-what, ’cause a Black man’s got no chance in this country. I be lucky if I make it to twenty-one with all these fools running round with AK-47s. Here I am one of the few kids I know whose daddy didn’t skip out on him, and he didn’t even make it to thirty. He was doing okay ’til he got blown away on a Saturday. Blam! Another statistic in a long line of drive-bys. Life is cold. Future? What I got is right now, right here, spending time with my homeys. Wish there was some future to talk about. I could use me some future.

I’m just about ready to sleep off the whole year when this teacher starts talking about poetry. And he rattles off a poem by some white guy named Dylan Thomas that sounds an awful lotlike rap. Now I know me some rap, and I start to thinking I should show Mr. Ward what rap is really all about. So I tell him I’ve got a poem I’d like to read. “Bring it on Friday,” he says. “As a matter of fact, from now on, I’ll leave time for poetry readings at the end of every month. We’ll call them Open Mike Fridays.” Next thing I know, I’m digging my old rap poems out of my dresser drawer and bringing them to school. I’m thinking it can’t hurt to share them, even if there’s no chance I’ll ever get to be a songwriter. After all, it’s the one thing I could see myself doing if there really was a future. And I’m thinking that maybe there could be if I wanted it bad enough. And all of a sudden, I realize I do.

We are all here
Leslie and Bad Boy, Lupe and Raul,
Here, here and here.
Dear Mr. Ward
with his wards and wardettes.
Let’s have a show of hands today.
Is Porscha here? Is Diondra here?
Where oh where is Sheila?
It’s me, Tyrone,
up here all alone
rapping into a microphone
’cause I’ve got something to say:
MTV is here, Mir and
morning space-walks are here,
Terrorism is here
lurking at the bus stop
can’t hop on the subway
without thinkin’ of Tokyo—
we all know poison gas
does not discriminate.
It’s too late to worry
about my innocence
since fear is here.
Why is it a weekend visit
to your local Mickey D’s
may be deadly?
Why hasn’t somebody
censored death?
Don’t hold your breath waiting.
Still you can chill and celebrate
all that’s great about life, like music
and the tick-tick-tick of time
which is equal parts yours and mine
to make of the world what we will.
But first, say no to coke, and smoke.
Say no to police brutality
and causing fatality.
Say no to race hate.
Don’t underestimate
the power of love.
But most of all
take two poems
and call me
in the morning. 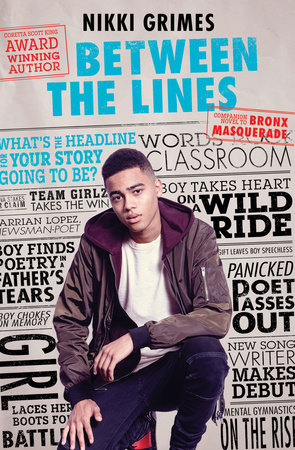 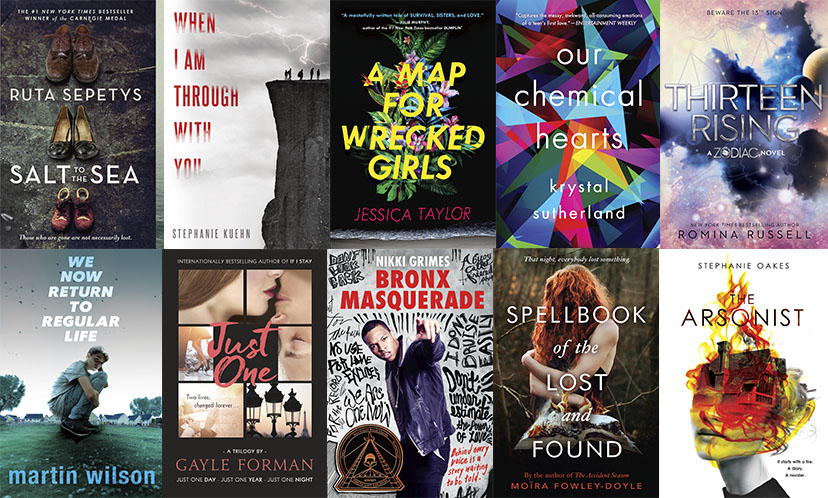 Every Book Going On Sale in August 2017!
Penguin Teen