Did someone say Romeo and Juliet inspired romance set in a comic book shop?

From the author of Hot Dog Girl comes a fresh and funny queer YA contemporary novel about two teens who fall in love in an indie comic book shop. Jennifer Dugan’s Verona Comics is hitting shelves this month, and we’re celebrating with an excerpt! Scroll down to read. 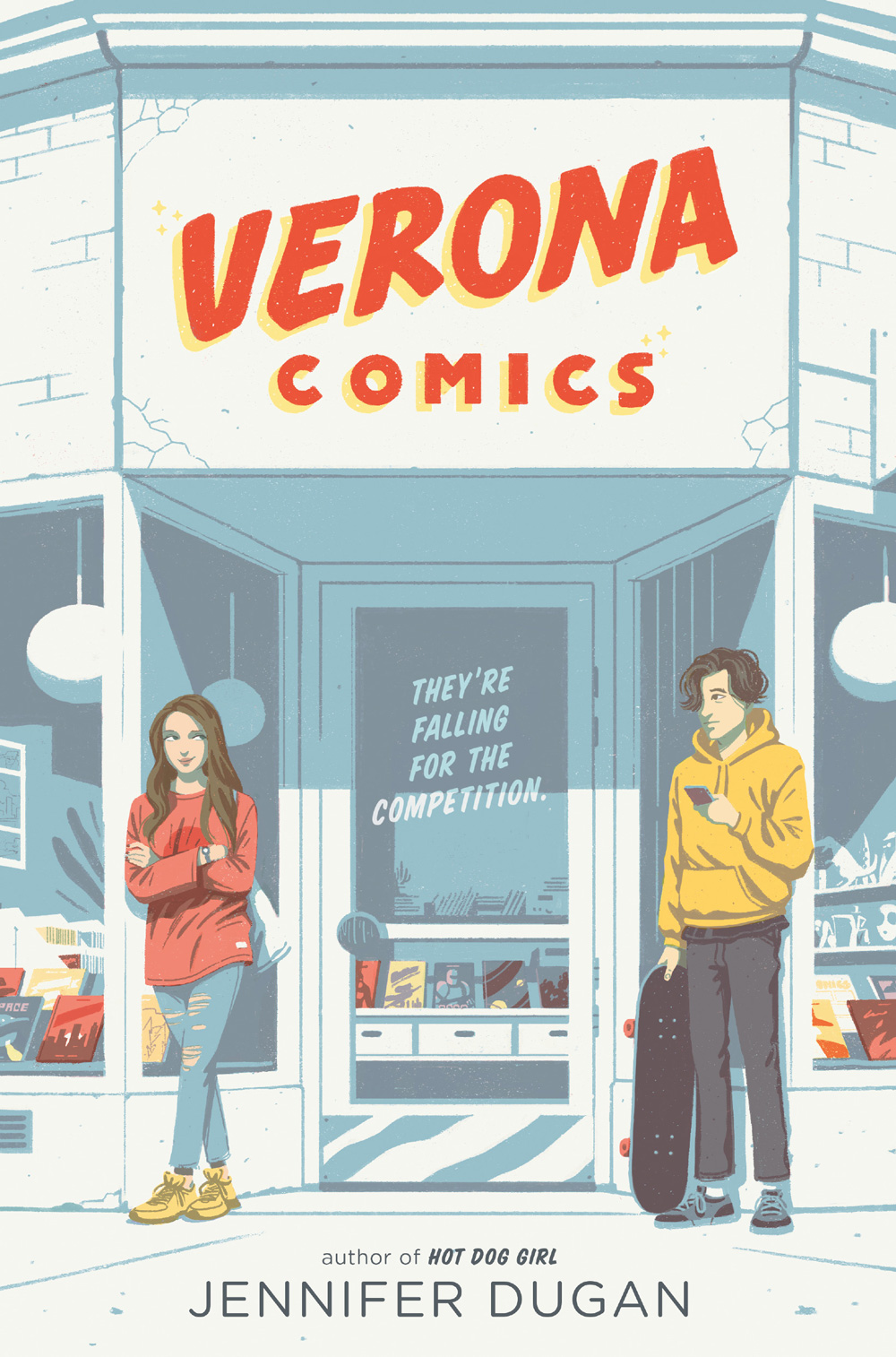 “You look like you’re being tortured,” Jayla says. “This is supposed to be fun.”

Easy to say when you’re the one on the other side of the tweezers. I squeeze my eyes shut as she picks them up again, a tinge of fear washing over me when I smell the glue. I can’t move my head while Jayla’s working on my eyelashes, something she’s stressed to me about a dozen times already in increasingly frustrated tones, so I try to distract myself by practicing the prelude from Bach’s Fifth Cello Suite in my head. I tap my fingers against the cold bathroom counter, pressing imaginary strings and feeling homesick for my instrument.

Feather eyelashes and fancy dresses are worlds apart from the chunky sweaters and ballet flats that I prefer. But this is for the greater good, a part of my weekend of “pushing the boundaries and embracing life for the sake of my music,” which has somehow turned into letting my best friend dress me up for FabCon prom after an already long day at the convention, selling comics with my parents.

Right. I’ve been instructed (read: forced) by my private instructor, Mrs. Garavuso; the school orchestra teacher, Mrs. Carmine; and both my parents to “let go” and take a weekend off from my instrument. On a technical level, Mrs. Garavuso says I’m the best cellist she’s ever had. But apparently I’ve been, and this is a direct quote, “playing with the passion of a robot lately.” Mrs. Carmine, traitor that she is, agreed wholeheartedly. Not exactly what I want to hear as I prepare for the biggest audition of my life—the summer program at the Carnegie Conservatory, where I’ll get to study with Aleksander Ilyashev. He’s been my dream teacher ever since I heard him play Beethoven’s Triple Concerto with the Boston Symphony. And if I want a shot at getting into Carnegie for real after high school, a summer of his advice and guidance is the biggest boost I could possibly get.

“You think too loud.” Jayla sighs, so close I can feel her breath on my cheek. “Seriously, get out of your head.”

“Lies,” she says, but I can hear the smile in her voice. “Respect the rules. I bet you’re breaking at least two right now.”

The rules, right. Jayla and I made a list of them on our way to the con. I’ve been mostly focusing on the first three, with varying degrees of success. Rule One: I can’t practice cello, nor can I do any homework this entire weekend. (Half credit; I’ve been practicing this whole time, but only in my head.) Rule Two: When not helping my parents in their booths, I can’t sit in my room obsessing over the audition. (Okay, she’s got me there; I’m totally failing at this one.) Rule Three: I have to try a new food at each restaurant we eat at. (Switching from Sprite to Cherry Coke counts. Fight me.)

“You’re going to flip when you see yourself,” Jayla squeals, pressing another feather to my eyelid.

Not that I really doubted it. Jayla is to makeup and fashion what I am to music—top tier, the best of the best, no apologies—except nobody would ever say her work lacks passion. She’s been planning on going to FIT her entire life, and her new obsession with cosplay has given her an extra excuse to flex her fashion muscles.

“Annnnnd done,” Jayla says, and I open my eyes.

I blink twice. I look . . . amazing. My dark brown hair is piled high on my head in an elaborate updo with long feathers streaming out in different directions. She’s blended shimmery teal and green eye shadows together around my eyes and added little dots of eyeliner to accentuate the corners, and then there are the feathers. The feathers! Tiny little teal things, curled to perfection, adorn each eyelid, transforming me into something more akin to a magical forest creature than a cellist. I’ve disappeared completely into Mora, the badass peacock-inspired leader from my stepmom’s famous Fighting Flock comic series.

Jayla turns back to putting the finishing touches on her own makeup in the mirror, gently dabbing bright white spots onto her dark brown skin. “Go get your dress on. I’m almost done.”

“Yes, ma’am,” I say, hopping off the counter. I grab my emerald-green dress off the hook and disappear into the bedroom to get changed. I bought this dress for a school dance a few months ago—Jayla said the color “really popped” against my fair skin—but she’s modified it pretty heavily since then, changing the cut, adorning it with feathers, and just generally turning it into a gown fit for peacock royalty.

I glance at the time and groan. “Prom started fifteen minutes ago.”

“We’re supposed to be fashionably late,” Jayla calls back through the bathroom door.

“If you don’t hurry, we’re going to be the unfashionable kind,” I mutter, zipping up my dress. I’m still struggling to tie the crisscrossing green and purple ribbons up my arms when Jayla finally steps out of the bathroom.

“Here, let me,” she says, coming over, and I do a double take. Gone is Jayla, and in her place stands the best Shuri cosplay I have ever seen in my life. She’s wrapped her braids into a massive bun on her head, and while it’s not quite Wakandan-princess level, it’s close. Add in the makeup and the warrior outfit she’s been crafting for months and—

“Yeah,” she says, holding her arms out and twirling.

“You’re definitely going to win tonight. You know that, right?”

She shrugs. “I better, after what happened earlier.” Meaning when her Harley Quinn cosplay came in second place, which she rates as a major underperformance, even though there were nearly 150 people competing and there was no way she was beating someone in a life-size replica of Hulkbuster armor.

“Stop, you did awesome,” I say, but she shakes her head.

Jayla’s always intense with this stuff, partially because she’s super competitive (see also: only being a junior and already the co-captain of her club’s soccer team), and partially because people will find any excuse to tear down a black girl that dares to also cosplay white characters. Jayla can’t just be good; she has to be great, and even when she’s great, she still gets crap for it. It’s gross and annoying and one of the things I hate most about the comics community.

“Yeah, I just have to strap myself into these death traps,” I say, sliding my foot into a shiny green stiletto. I thought Jayla was kidding when she showed up to my house with them. Spoiler alert: she was not.

Jayla offers me her arm as we head out when it becomes clear that an ultra-plush carpet adds an additional degree of difficulty to super-high heels. “Everybody’s gonna love those death traps.” She laughs. “There is absolutely no way you’re leaving that dance without checking off Rule Four.”

Ah yes, Rule Four, aka the Final Rule, aka the only thing I have yet to even attempt, despite the fact it would probably be the most inspiring for my music: I must experience a con crush.

Con crushes are kind of Jayla’s thing—find somebody nice, spend the weekend flirting, and then go back home, no muss, no fuss—or they were, before she started casually seeing the other co-captain of the soccer team, Emily Hayes, a few weeks ago. I was supposed to pick up her slack on that front, but no luck so far. It’s not that I’m not open to it . . . it’s just that nobody has caught my eye.

The elevator doors are open as we round the corner, but thanks to these ridiculous shoes, we don’t have a prayer of making it in time.

“Hold that door!” Jayla shouts, dropping my arm and sprinting the rest of the way. Thank god for battle-ready outfits. She slides in her arm just as it closes, and the door bounces back open. She grins as I stumble in after her, laughing hard. I lean against the rail to catch my breath and realize with a start that we’re not alone.

Batman stands in the corner, head tilted, taking in the sight of us. Well, a smaller, teenage-looking version of Batman, anyway—in a white dress shirt, a skinny tie, and dark fitted jeans. Okay, fine, so it’s basically just a dude in a mask. But it counts.

I can tell Jayla is probably about two seconds away from monologuing about the undue appreciation the comics industry shows for mediocre white boys and how this boy in a mask is case in point because he’ll probably take prom king just for showing up. It’s her favorite topic, and she’s definitely not wrong—but it would make for an awkward elevator ride. I’m a little bit relieved when she just rolls her eyes at him and bustles to the opposite side of the elevator car, mumbling, “What’s up, Office Batman?”

He bends down and picks up a feather I must have lost while sprinting into the elevator, spinning it around in his long fingers. Piano fingers, I muse. I have a habit of reducing everyone down to the instrument they should play. Jayla would be a saxophone; my other best friend, Nikki, is a flute; my ex, Dakota, is an out-of-tune harpsichord. Vera is a—

“Lost one,” Batman says, all quiet. And yeah, that mask and the scrape of his voice and the way he’s sliding up his sleeves right now are kind of working for him. The idea of “pushing the boundaries” just got a lot more interesting.

“I guess I did.” I smile and reach for it, but he just keeps twirling it, like he’s in no hurry to give it back.

“She must be molting,” Jayla deadpans. She pushes the button for the first floor, even though it’s already glowing.

Jayla widens her eyes, like obviously, dude, and nods.

“Nah.” He reaches across and hits the button for the second floor, which is odd considering he had to have been the one who hit the button for the first floor to begin with. “I like your dress, though,” he says, a little bit quiet, as the elevator doors ping open. He holds his hand out, offering me the feather.

“Keep it,” I say, and a blush rises to my cheeks as he turns to leave.

Looking for more love stories? Here are the 4 O.G. YA romances that will forever be in our hearts!