SHARE
What happens when you’re craving high stakes paranormal adventure AND a trip back in time? You #win with The Dark Days Club, that’s what happens. When demons infiltrate all social ranks of early 1800′s London, Lady Helen must choose to save her reputation or save the world – and her adventure makes for the most tantalizing of binge-reading sessions. Hear to tell us about the mind behind the masterpiece is author Alison Goodman!
Name: Alison Goodman
Novel: The Dark Days Club
Available: January 26
Who’s your favorite author, living or dead? I’m going to nominate two, because it is so hard to narrow it down. The first is Georgette Heyer who wrote gorgeous fun-filled romps set in the eighteenth century and the Regency. The second is Diana Gabaldon who is the author of the fabulous Outlander time-slip series that is set, mostly, in the eighteenth century.

What’s your favorite thing about your book? The demons: they are not your usual demonic dudes. I created their mythology myself and they are based on human yearnings.

If you could spend one year on a deserted island with one character from literature, who would you choose? I think it would be Jamie, the gorgeous hero from Outlander. Apart from the very obvious reason (ahem), he is also a great survivor.

Where do you write? I have my own workroom at home. At the moment it is full of my research: there are stacks of newspapers and magazines from 1812 (the year in which The Dark Days Club is set), at least forty books about the Regency, storyboards for each of the three Lady Helen novels, moon-phase charts and weather reports stuck to the walls, bonnets, gloves, a pair of Regency boots, as well as loads of pictures of carriages, hairstyles, reticules and beautiful gowns from the period for inspiration. There is also a wardrobe full of real gowns, pelisses, and petticoats; I commissioned a seamstress to sew me some historically accurate clothes, including boned stays.

I took a pic of my room to show you, but when I looked at it on the screen, I realized I am (a) incredibly messy, and (b) the photo was full of visual spoilers for Books 1 and 2. So instead, here is a much neater pic of me in my Regency gear. 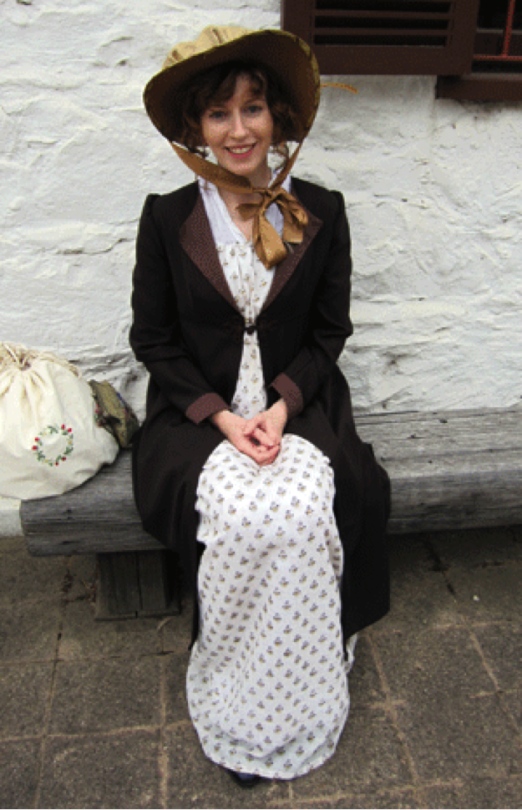 See, very neat. I’m also proud to say I made the bonnet myself and, yes, I was wearing the boned stays. They are not as uncomfortable as I thought they would be, although it is almost impossible to take a deep breath!

Who is your favorite hero or heroine of history? Queen Elizabeth I (1533 – 1603). She not only survived a deadly political arena that was hostile to her as both a ruler and a woman, she also created a Golden Age for England. Regina Gloriana, indeed.

A sneaky peek at Lord Carlston in The Dark Days Club (due out January 2016). #DarkDaysClub#AlisonGoodman#eon#eonapic.twitter.com/WNJSCcoWxc

What is your favorite season? I do love an Australian summer. I love getting up in the morning when it is already warm. I love having breakfast on the deck. I love going to the beach at sunset on a hot, hot day and lazing in the water as the sun goes down. I love easy summer dresses and wedge sandals, and I love all the lovely summer fruit, particularly apricots. Bliss.

If you could teleport anywhere in the known universe right now, where would you go? I would stay on Earth, mainly because the known universe is, at present, not very well known or able to sustain human life! I think I would teleport to London. It is such a fascinating city with so much history and some of the best museums for hunting out Regency gems. On my last visit, I saw a number of cameos of Lord Byron—his many female fans used to carry them around to show their devotion, kind of like a Regency version of a poster on the bedroom wall.

Do you have any writing rituals? Every morning, I read over the writing that I did the day before, edit it, and then move on to the next section.

What is your idea of earthly happiness? A Firefly marathon with a good supply of potato chips.

What is the best concert you’ve ever been to? A concert by Queen, when the amazing Freddie Mercury was still alive. What a voice, and what a gloriously over-the-top showman! If you want to see him and Queen in full hilarious action, check out this video for I Want to Break Free.

What are you currently working on? I am currently working on the third book in the Lady Helen series, and a short story for an anthology called And Then…The Great Big Book of Awesome Adventure Tales that is due out with Clan Destine Press this year. The story is set in the same period as The Dark Days Club and is called “The Benevolent Society of Ill-Mannered Ladies.”

Thanks Alison, we can’t wait for more in the Lady Helen series!

Read the first chapters of The Dark Days Club here!