IT’S TIME FOR ROUND 6. And we are getting CRAZY close to the semi-finals.

And what else? It’s time for TWILIGHT VS. LOVE SIMON AHHHHH 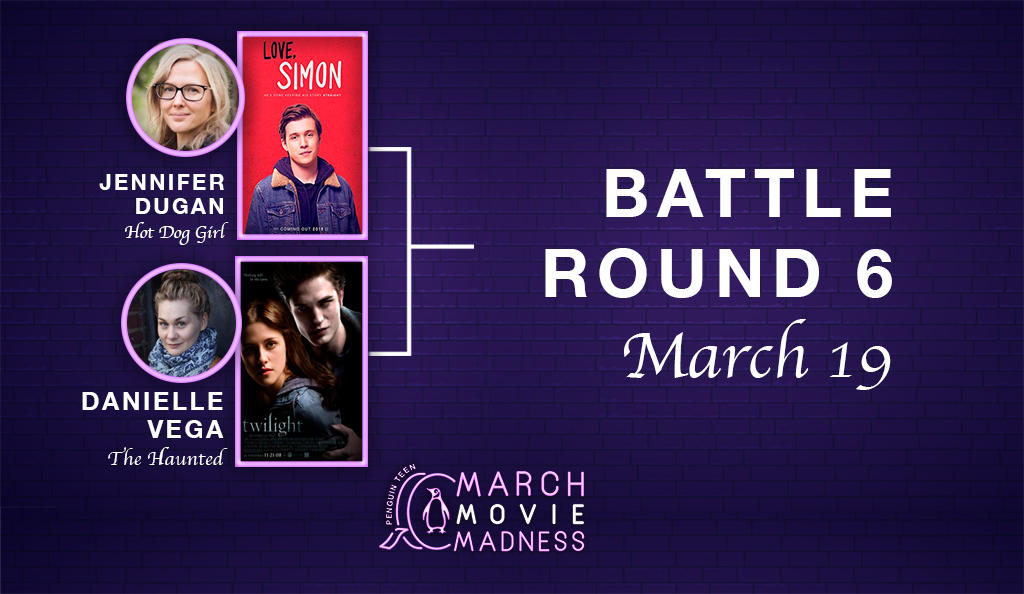 I know some of you immediately dismissed this entry. Friends, I used to be one of you. Anyone who has met me in person knows that I prefer my vampires with bumpy faces and tight-fitting leather pants (ala Buffy.)

But I’m putting all that aside for this. In order to consider “Twilight, the movie,” we need to forget everything we know about “Twilight, the international phenomenon.”

Have you done that?

Now, the real work can begin.

This movie, you guys. The whole thing feels like walking through the forest after it’s rained. Everything is bathed in blue light. A freaking deer drifts onto the screen and it’s a metaphor for innocence and purity.

This movie is yearning. It’s feelings.

If you haven’t seen Twilight in a while, I guarantee that you’ve forgotten some things.

Like, how baby Kristen Stewart was exactly as shy and nervous as all of us felt on the inside.

Even with the strangely aggressive hair, he is so much fun to look at.

Also, Anna Kendrick was in this movie, and she was a delight.

But maybe all that’s not enough for you. Maybe you’re one of the haters whose all, but remember that scene where they play baseball for no reason? Or how he calls her spider-monkey? And the sparkles! How can anyone forget the sparkles?!

Look. I hear you. And I could easily point out that Twilight changed the landscape of publishing as we know it. It would take more words than I’m allotted here to go into just how much Twilight affected the industry as a whole, so let me just say that most of the other movies in this contest only exist because of the unprecedented, world-wide, rocket-ship success of Twilight. That alone should guarantee this movie a win, but I’m not going to go there.

Instead, I’m going to leave you with this:

There’s a scene near the middle of the movie where Edward and Bella lie in a meadow and stare at each other. Somewhere in the forest around them monsters are killing innocent people and, further off, there are complicated family dynamics, and new classmates, and creepy boys who think it’s okay to sexualize a young woman just because she’s walking to her car after dark.

But in the meadow, none of that exists. There’s only the two of them.

I can’t think of a better metaphor for being in love for the first time.

(And we haven’t even gotten to this guy, because that’s New Moon but…yeah.)

It’s impossible not to love Simon Spier, Mr. “I like your boots” himself. IMPOSSIBLE. But just in case you’re somehow still on the fence, let’s talk about why Love, Simon is the best teen movie of all time.

First of all, it has everything you could want; a mysterious yet age appropriate love interest, a delightfully charming lead, a diverse cast, a plot that boasts anonymous emails, a Halloween Party with the cutest post-presidency Barack Obama costume I’ve ever seen, AND THE MOST EPICALLY ROMANTIC MOMENT ON A FERRIS WHEEL IN THE ENTIRE HISTORY OF BOTH MOVIES AND FERRIS WHEELS.

Plus, the relationship between Simon and Blue that develops is so sweet it will make your teeth hurt. Simon puts his heart on the line without resorting to stalking anyone or sneaking into their bedroom to watch them sleep! In fact, not only does Simon let himself be emotionally available, but he even waits for Blue to decide to come to him. Agency! Consent! Love it!

Also, can we talk about the fact that this isn’t just a rom-com, it’s a queer rom-com. Simon is gay, so is Blue, and we follow not only their path to falling in love, but also their paths to accepting themselves—asking important questions like “Why is straight the default?”— something that teen me would have loved to see on the big screen.

As if it that wasn’t enough, it has a cameo of not ONE but TWO kid lit icons, Becky Albertalli and Adam Silvera in the Halloween party scene, and if you vote for Love, Simon I will personally come to your house and point them out to you.*

*I mean tweet the time stamp it occurs, which you’ll presumably read in your own home, so it’s just like me being there