Have you ever felt like a book messed with your mind? That’s the genius of The Smaller Evil: narrated by a boy named Arman, it’s a twisty-turny roller coaster ride in which you’re just as suspicious as he is of the strange events at a self-help retreat in the hills. Here to tell us more about the mind behind the masterpiece is author Stephanie Kuehn!

Who’s your favorite author, living or dead? Oh, that’s hard. I’d have to say Iain Banks when I think of an author whose work has had a lasting impact on my life and my worldview. The Crow Road and Espedair Street, especially. Even when exploring some of the truly dark (very dark!) and self-serving sides of humanity, Banks’ writing was never cynical and I’ve always appreciated that.

What’s your favorite thing about your book? That there’s no set moral compass. I set out to explore our culture’s dependence on the notion of independence, which gets played out at a high-priced self-actualization retreat in the hills of Big Sur. I suppose the cynical choice would’ve been to cast Beau’s compound as bad and exploitative, full stop, but that leaves no room for introspection outside of that particular milieu. I believe we’re all a part of various systems that exploit us and which we, in turn, use as means to feel good about ourselves. There’s value in dependence no matter how much we choose to ignore that fact, and if people aren’t hurting others in the ways they choose to meet their emotional needs—or being hurt—then it’s not my place to judge their choices. Of course, there are plenty of nuanced discussions to be had around what constitutes hurt, exploitation, and the abuse of power, but I want readers to find their own answers to these questions.

If you could spend one year on a deserted island with one character from literature, who would you choose? Aloysius Pendergast. We would never run out of things to talk about, and I feel like he could make a gourmet meal out of anything. 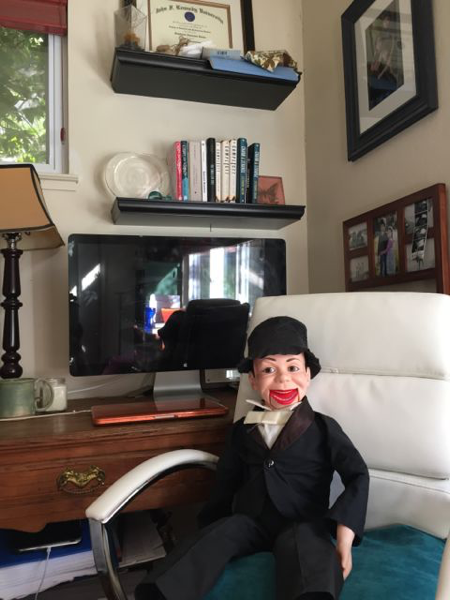 Where do you write? I have a tiny workspace in my house. Although in practice, I drag my laptop all around to write in different places in my house and yard.

Do you tweet? What’s the funniest thing you’ve ever tweeted? I do tweet! I don’t know how funny I am, but this tweet is from two years ago:

I made a personal commitment not be upset about a bedroom spider, but now it’s gotten really close to my head and I’m nervous.

What is your favorite season? Autumn. Where I live in California, winter is the time when everything turns green and comes alive (so long as it rains…). This means there’s a wonderful sense of anticipation that comes with fall. Summer is ending. Everything is brown and burnt to a crisp, but the weather starts to cool, the light begins to change, and that sense of impending rebirth fills the air. I love it.

If you could teleport anywhere in the known universe right now, where would you go? Puerto Vallarta.

Do you have any writing rituals? I tend to write at home, very early in morning. I usually get up, start coffee, and feed the animals. When the coffee’s ready and the animals are happy, that’s when I sit down to write. The earlier, the better. I love working when the world is quiet. Even better, is when it’s dark.

What is your idea of earthly happiness? Trail running in the Sierras.

What is the best concert you’ve ever been to? I’m going to go way back and say Prince and the Revolution (plus Sheila E.) at the Cow Palace for the Purple Rain tour in 1985.

What are you currently working on? I am working on my next YA novel, in which a seventeen-year-old boy recounts not only the tragic events that befall his high school’s orienteering club during a three-day backpacking trip in the Trinity Alps, but also the complex and thorny history of his relationships with both his long-suffering mother and longtime girlfriend.

Ready for more from Stephanie Kuehn? Get your copy of The Smaller Evil!