Happy #FridayReads! This week, we’re reading Alice by Heart by Steven Sater. A young girl takes refuge in a London Tube station during WWII and confronts grief, loss, and first love with the help of her favorite book, Alice in Wonderland, in the debut novel from Tony Award-winning playwright Steven Sater. Scroll down to read the excerpt! 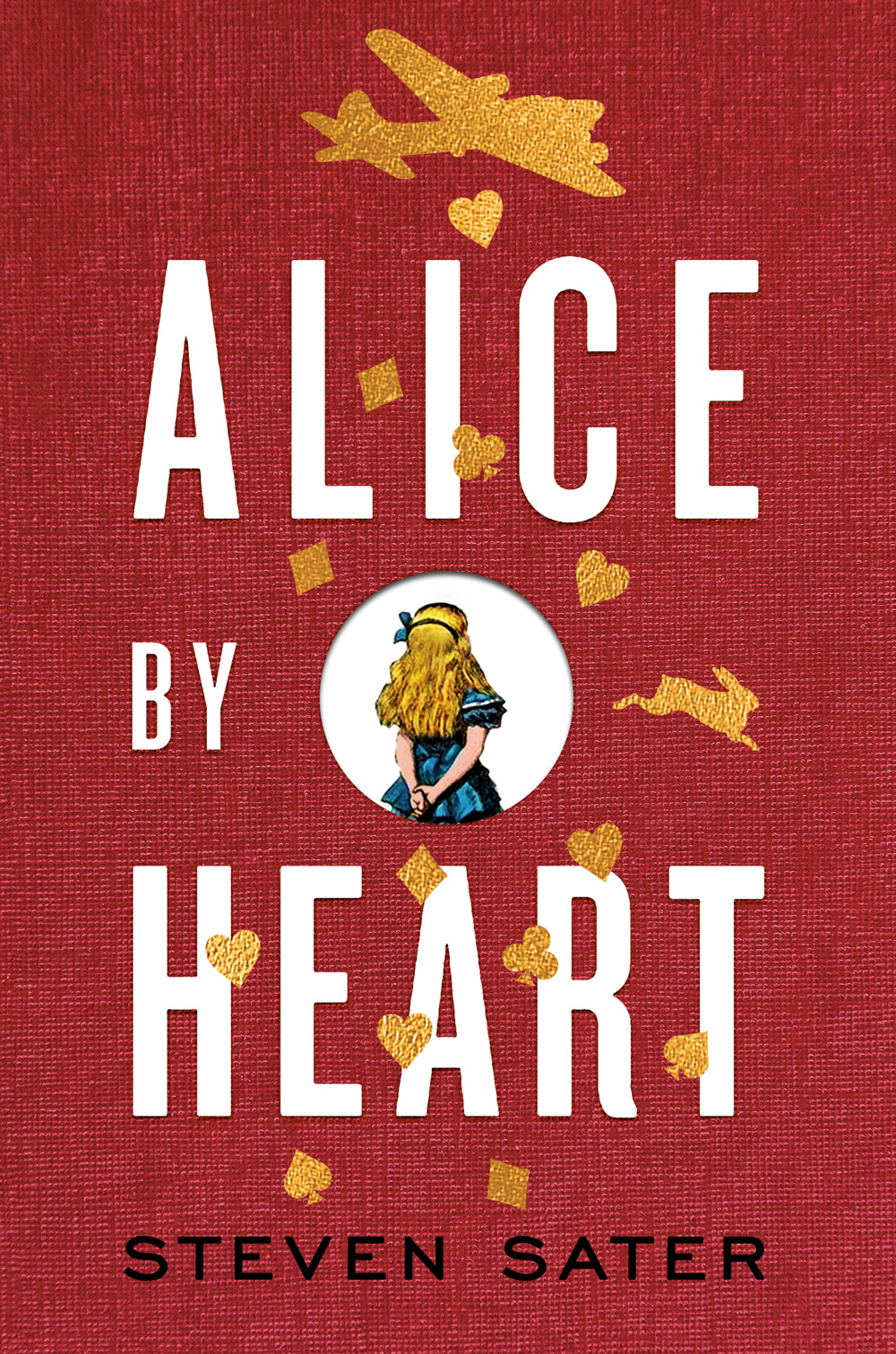 Alice was beginning to get very tired of lying on her flimsy cot—within this barrack full of cots, this musty world of makeshift hammocks strung between Underground tracks. But, here she was—whoever now she’d become—in the same old shape of her old familiar self—in a cold that kidnapped her from everything else. Everything but the drip, and the drip, and the drip of some thankfully still-unburst water main, high overhead. (Each drip like a word in some unknown tongue, reiterating how irritating Alice’s presence was.)

Something—each drip seemed to insist—she had to do something. Couldn’t merely lie in the gloom here forever, running the parched palm of her hand over the burlap strap that bound her cot to the world of these tracks. No, she could not just lie here. Not at age fifteen—without even a shred left of her irony! No—no more pretending. Not now. She had to go, had to know: how was Alfred? And so, she thrust herself up—bye-bye, stuffy cot.

Upright, she started—one step, on. For, despite how far it might feel, despite how disruptive to those other Tube-creatures her trundling by might be, it was only a few meters, she knew, between her cot and his quarantine.

But then, all at once—there She was. (As always She was.) That Red Cross Nurse. She, who was always and forever monitoring their every wayward move, policing every breath, suppressing every joy, their slightest wish. Keeping every one of them separate and alone, on separate, lonely beds, with only their broken thoughts to keep them company—those, and their bruised or wounded limbs.

Just hold still, Alice told herself. Soon that dread Nurse will be gone—soon, moving on. Passing out blankets. She, the would-be Soul of Charity, clothing and visiting, tending to the drippy-nosed and sickly. Any excuse, Alice surmised, to barge her way in. To bark out orders in that rasp-addled accent of the failed (or faux) aristocrat. Handing down her imperial decrees: “Chilly night, tonight!” Her petty commandments: “You naughty elf! Wipe your nose on someone else!” This High and Mighty Nurse, forever talking down, never to, them—and rarely to some one of them—rather, to the one Them: this one, lowly, incurable Tube-station crew, who dared exist beyond Her whim. All their orphaned minds like perfect blanks, awaiting her beige-crayon words to color them in. “Do you have any idea, any of you, how many tired girls in floral prints labored to cut those blanket threads to regulation lengths?”

So the woman would bark—so she’d instruct—and then, on she’d go. With that prominent nose, protruding from those tweezed-out, painted-on brows, and that prehistoric raven claw of hair. Leading, of course, with her no less prominent chin. Declaring herself incapable of fatigue with her every wary step. Demanding room for herself, wherever she went.

“Dr. Butridge!” the Good Nurse rasped. But no word answered. “Lyman Butridge!” she bellowed, as if swallowing the sorry truth that she could not, even through such vocal grandeur, summon a somewhat grander man. No, only him. Him, her minion. In rank, the woman’s superior; in fact, her subordinate.

“Doctor, this instant,” she persisted.

Poor Butridge. Had he lost his hearing in the bombing? Or something? In any event, here he was, doddering on, on his interminable nightly rounds. Really, thought Alice, the man must have been here, must have done this, must have spewed out his spittle and prescriptions since the ducks got seasick riding Noah’s ark.

“Doctor, come see,” the Nurse yawped. But that Doctor doddered on. And on. Exasperating the would-be-unflappable Nurse: “Dr. Butridge! The Hallam boy.”

“The Hallam boy”? Meaning, Alfred?! But why was she summoning the Doctor to him? Why again?

Duty done, the Nurse flapped the quarantine shut and hastened on—to examine her next suspect.

Alice shuddered, snapping to attention. She had to see, had to know, what those medical thugs were planning. Couldn’t they just let be? Why this infernal need to Do? After all, what was Alfred to them? Just another stop on the Good Doctor’s nightly perambulations. The truth was, for medical men, war meant business.

On, Alice. One step. No Nurse around now. And that Doctor? He’s a Doctor, he won’t even look up. Certainly, he won’t look back.

Beyond all that, she thought, he wasn’t a mean man, Butridge. No doubt, deep down, he wanted to help Alfred. She knew that. Still, let her step the slightest step toward her friend’s quarantine, the man would virtually thrust himself before her—like some ministering Minotaur in this labyrinth of cots. (Or like that nonsense-spewing beast from her Alice-book, Through the Looking Glass. The Jabberwocky—but grown so wonky!) Splattering the dingy world with his doomdealing words, diagnosing this and that. Confusing this patient with that one. Prescribing that one this, and this one that. Spilling his Medical Commandments onto the platform like jacks. An incompetent, querulous quack, deciding what was what, and who got what—who was permitted to live, and who not. As if he bore the Clipboards of the Law in his ecstatic, twitching hands.

All the more reason she could not back down. Must not look back. And so, forward she inched. Vigilant. As, in his never-soiled medical robe, with those pleated short sleeves and that drooping button wagging from its mildewed thread, that antediluvian Doc clambered behind Alfred’s curtain. Clipboards clattering.

On. One step Alice went—clocking the Doctor through the sheet. His lean, shoulders-wobbling silhouette.

“Hallam. Alfred Hallam,” he mumbled. Mere words, she knew. Some mere name, soon to be ticked off from an indifferent, half-rusted clipboard. (One more Element, merely, on his official Periodic Table—another human life reduced to isotopes and neutrons.) But Alice leaned forward, intent. Now what? Not a breath. Not a thump on the chest. And then, some Roman-sounding phrase, like a verdict: “Superventrical . . .” something? “Tachycartoonia . . .”? Mere gibberish. As her most-beloved Book, Alice’s Adventures in Wonderland, would say: “I don’t believe there’s an atom of meaning in it!” Just tell me he’s all right, can’t you?

Ridiculous, really. But, always and forever, that Doctor used only the most inscrutable terminology. As if only to show you how scary words really were. Why else did doctors and priests always speak in such a way, when they knew you knew no Latin? Why, except to show how much you needed them, Goodly Robed Men, to intercede with God or some Bacteria on your behalf.

Another step. Very nearly there she was. She could almost duck, could almost join that Dodo Doctor and Alfred, on the other side of that silvery curtain. Maybe she could—maybe she just would.

She set her hand on the curtain. Finally, there. But was she there, she wondered, while he remained unaware of her? Half-stooped already, she cast one last quick look about. And there, zooming toward her—from where?—that Nurse! God’s one Cross Nurse. A Fascist if ever there was one (though of course she wasn’t). A woman like a coil ever coiled, ever ready to spring.

Never had her name felt shorter or squatter or more spat out upon her. As if she were hardly worth the time it took to name her.

This time, her full name. Which, of course, took that much longer. Which, of course, gave Alice such a tremor, till she felt herself frozen—in those two extra syllables of fear. Caught, with that snatch of sheet in her red hand. Nothing left to lose, then, was there? Better just to yank open that curtain— to be with him, a moment. All at once, she tugged the sheet . . .

And there he was. In one keen glance she could grasp it: his cheeks, his throat, so red and swollen; his eyes sunken in hollows; his forehead matted with sweat—as if he’d been feeding only on the fever now. Poor Alfred! The Doctor bent over him; some press-down stick, some beastly twig in that (hypocritically) Hippocratic hand, pressing down, down, down—as if he’d leverage Alfred from his tongue. Over him, that Doctor darkly murmured some pseudo-truth, some mumbo jumbo: “Due to Hypovolemia, and concomitant Hyperhydrosis—severe night sweats . . .”

Alfred trembled as her eyes passed over his. Over his lips, his strained neck, throbbing. Breathing. Oh, touch me, sad eyes. Soft eyes. See me, Alfred.

Through the fringe of dark fluttering lashes, he saw her—he must have! He tried to utter something—“Alice”?—but his bloodshot-blue eyes washed full of tears, then fluttered shut again. As if someone had just closed the blinds on her view of the sea. . . .

And with that, a stab of rage came ripping through the curtain. Stout rutted hands grabbing, thrashing her. Gripping and suffocating her. “Let me go!” Alice shrieked. “He needs me.” But, those barbed-wire arms clenched tighter, piercing their cold thorns into Alice’s flesh, as that Monster Nurse lugged the girl like a sack of guts toward her cot.

“No. You are hurting you. I am merely moving through.”

So, is this what Nurses do? Keep everyone apart, for fear their mental flu will spread? As if words and thoughts and looks were somehow germs?

“And button up that blousy, Mousey,” the Red Cross Nurse groused.

Ouch! If only she were in Wonderland now, Alice thought, she could fall—flat on her fat Alice-face—like one of those shamefaced Playing Cards, humiliated by the Queen of Hearts. Not being there, but here, within this grimy Tube station, she merely lowered her eyes and took in her guilty blouse again. Yes sure, it bulged—a bit. But it had unbuttoned itself, it had!

“Button it,” that dour Nurse pronounced. Then, with a brusque preemptory shove, she dumped Alice onto her deadly cot.

Excited for 2020? Check out our January preview!