Excerpt alert! The Chosen meets Darius the Great in The Life and Crimes of Hoodie Rosen, an irreverent and timely story of worlds colliding in friendship, betrayal, and hatred.

Hoodie Rosen’s life isn’t that bad. Sure, his entire Orthodox Jewish community has just picked up and moved to the quiet, mostly non-Jewish town of Tregaron, but Hoodie’s world hasn’t changed that much. He’s got basketball to play, studies to avoid, and a supermarket full of delicious kosher snacks to eat. The people of Tregaron aren’t happy that so many Orthodox Jews are moving in at once, but that’s not Hoodie’s problem.

That is, until he meets and falls for Anna-Marie Diaz-O’Leary—who happens to be the daughter of the obstinate mayor trying to keep Hoodie’s community out of the town. And things only get more complicated when Tregaron is struck by a series of antisemitic crimes that quickly escalate to deadly violence.

As his community turns on him for siding with the enemy, Hoodie finds himself caught between his first love and the only world he’s ever known.

Isaac Blum delivers a wry, witty debut novel about a deeply important and timely subject, in a story of hatred and betrayal—and the friendships we find in the most unexpected places.

Scroll down to see the cover and read a sneak peek of The Life and Crimes of Hoodie Rosen by Isaac Blum, coming to shelves September 13, 2022! 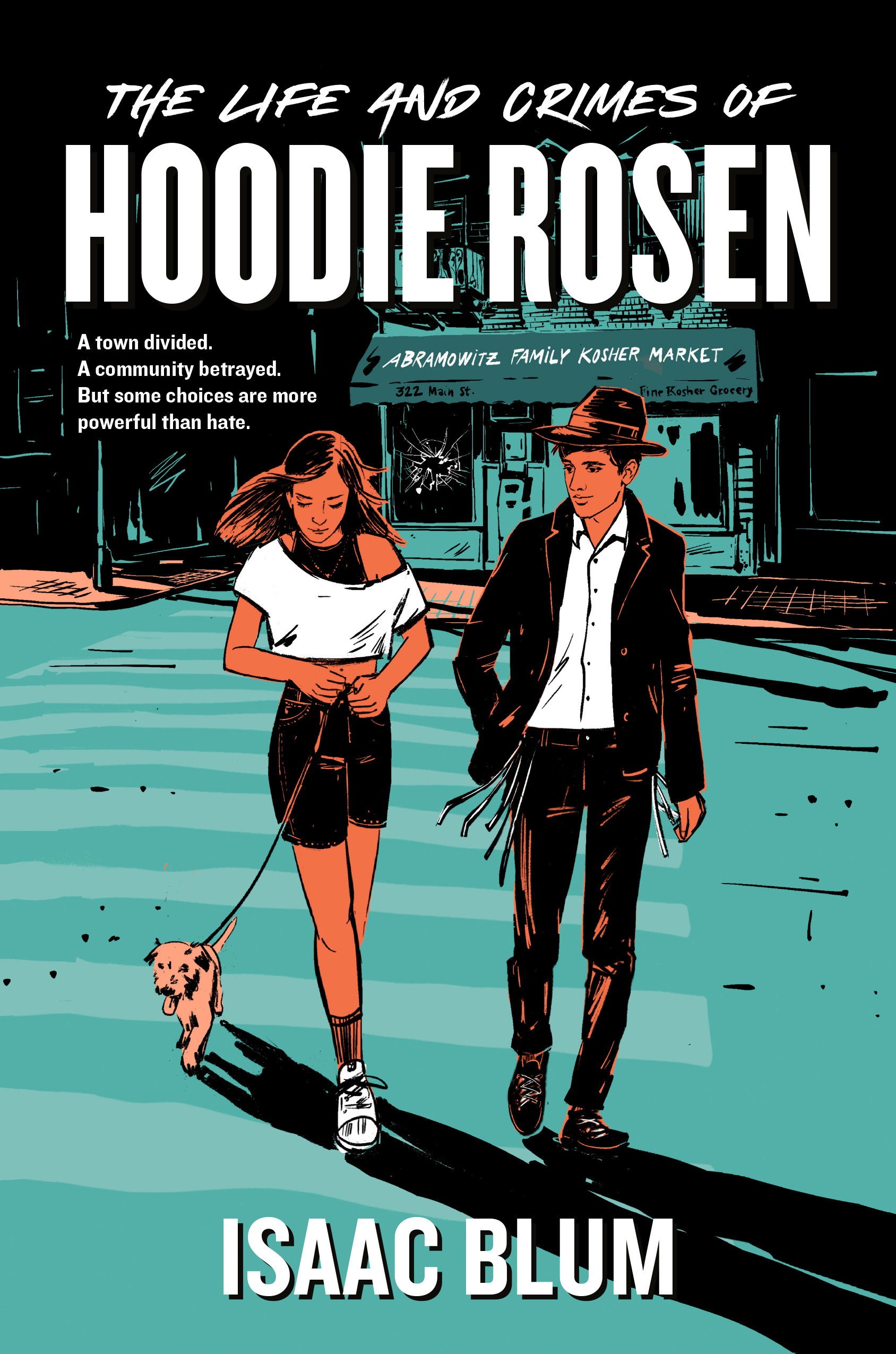 in which I celebrate Tu B’Av by taking the first step toward my own ruination,

Later, I tried to explain to Rabbi Moritz why it was ironic that my horrible crime was the thing that saved the whole community. He didn’t get it, either because he was too angry, or because his head was filled with other thoughts, or because the man has no sense of humor.

I don’t think it’s funny now—it ruined my life, put me in intensive care, and humiliated me and my family on a global scale. But I found it funny at the time.

It all started on Tu B’Av, which is one of the more obscure Jewish holidays. I’m Orthodox, but even I couldn’t recall what the holiday was about. I only remembered when I looked out the window and saw the girl in white. She was on the sidewalk across the street.

I was in halacha class, learning about Jewish law. We were talking about ritual hand-washing. Rabbi Moritz paced back and forth in front of the whiteboard, reading from the Shulchan Aruch, making the occasional Hebrew or English note on the board.

I couldn’t ask my buddy Moshe Tzvi because he would make fun of me for not knowing. Moshe Tzvi studies really hard, and he makes you feel like an ignorant schmuck if you aren’t as learned as he is. So I just stared out the window as though the answer would be out on the street. And then it was.

Because now the girl was dancing, making various motions with her hands, swinging her body around in little circles.

Which made me remember that Tu B’Av had something to do with dancing girls and the grape harvest—the grape harvest was pretty big back in biblical times. During the grape harvest, all the unmarried girls of Jerusalem went out into the vineyards where the harvest was happening, and they danced, wearing only plain white robes. Because all these girls were wearing plain white robes, the boys didn’t know if the girls were rich or poor, or even which tribe they were from. It created a level playing field, and the boys could choose a wife without thinking about if she was poor, or if she was from some undesirable rival tribe.

The girl outside wasn’t wearing a white robe, because it was the twenty-first century. She wore a white T-shirt, its short sleeves revealing skinny arms. The shirt ended just above a pair of shorts that left most of her legs exposed. The legs ended at a pair of white Adidas sneakers, striped blue.

She was dancing. But why was she dancing? There was nobody on the sidewalk with her but a small white dog. I thought it was strange behavior, but maybe gentile girls danced for their dogs all the time. I had no idea. I wasn’t supposed to look at gentile girls. I guess there were Jewish girls who dressed that way too, but certainly not any I knew. And if she was a Jewish girl dressed like that, I wasn’t allowed to look at her either.