Four Dead Queens is nearly here, and trust us, this is the 2019 fantasy you DO NOT want to miss.

In case you’re new, it goes something like this:

Seventeen-year-old Keralie Corrington may seem harmless, but she is, in fact, one of Quadara’s most skilled thieves and a liar. Varin, on the other hand, is an honest, upstanding citizen of Quadara’s most enlightened region, Eonia. He runs afoul of Keralie when she steals a package from him, putting his life in danger. When Varin attempts to retrieve the package, he and Keralie both find themselves entangled in a conspiracy that leaves all four of Quadara’s queens dead. 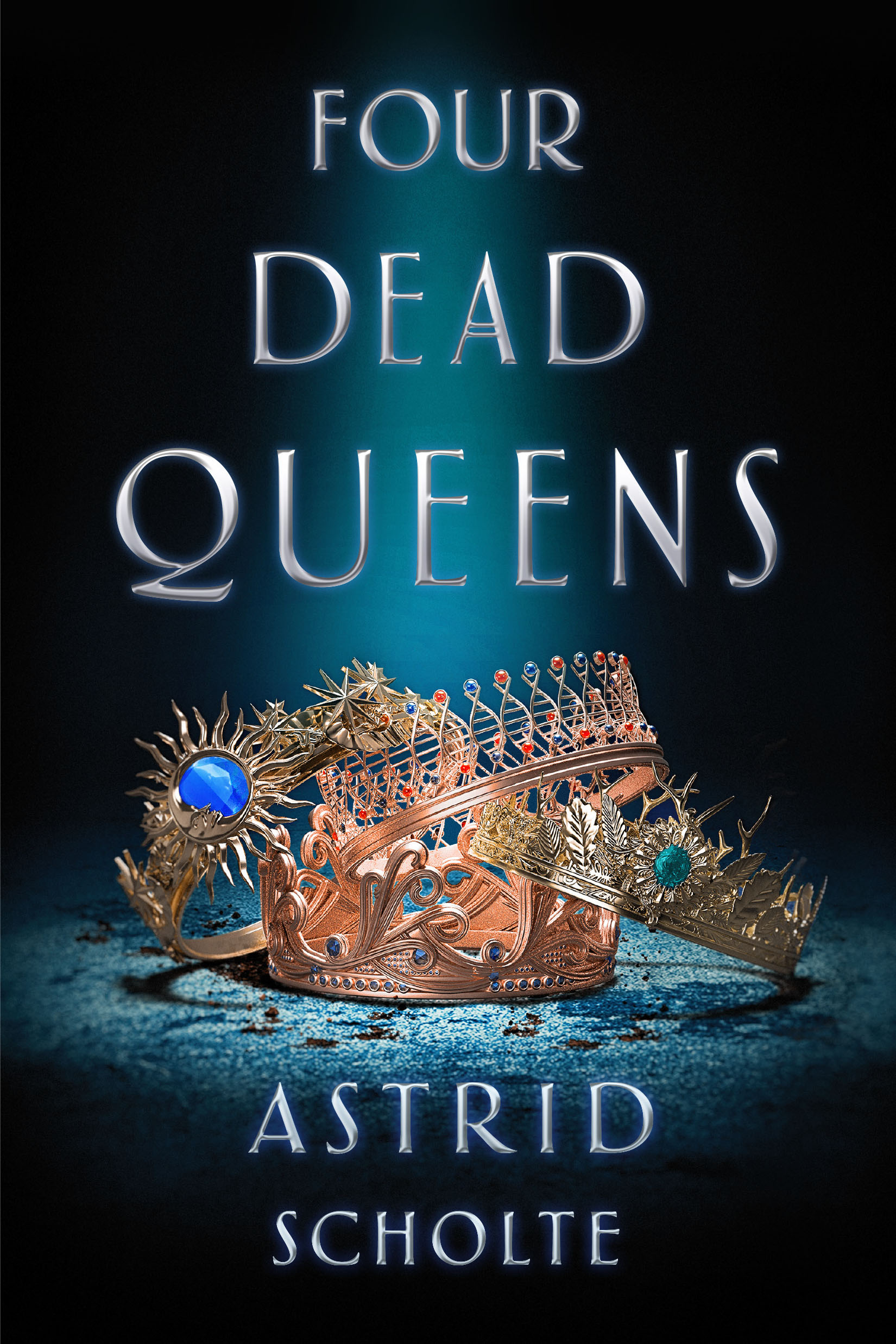 Okay, guys. We are talking assassination, conspiracy, a fantasy world you’ll want to pack your bags and move to asap, and SO MUCH MORE AND IT’S AMAZING AND–

You know what? We’re getting ahead of ourselves. We’re just super excited to show you this excerpt.

So, without further, ado…

Iris decided to spend the remainder of the day in her cultivated palace garden. Growing up, she had enjoyed countless hours in the immaculate grounds that surrounded her childhood home. It was there where she had imagined her reign and how she would rule an entire quadrant. Iris had been a solitary child, and while she had thought she’d prepared herself to be queen, she had not expected anyone could be capable of influencing her reign.

The garden was located in the Archian section of the palace, split in four as the nation itself. The garden sat outside the golden dome, perched on the cliff overlooking the channel toward the neighboring isle of Archia. Long ago, one of her ancestors had demanded access to nature—to life. Queenly Law decreed the queens were never to leave the palace—for their safety and to ensure they weren’t moved by external influences.

Iris would never set foot in her quadrant again, never soak in the beauty of Archia or see the stags and deer roam the mountains.

She sat back in her wooden settee; it sank into the grass while her black skirt swallowed the frame. She removed her heavy crown and placed it on the table beside her. She tilted her head, enjoying the sunlight on her pale skin. The warm springs bubbled nearby, reminiscent of the gentle brook that trickled not far from her childhood home.

This would have to do.

Also dictated by Queenly Law, Iris had been raised by adoptive parents outside the palace in the region she would one day rule. But while she’d been raised in a humble stone cottage, she’d never wanted for anything. She didn’t know how to want for things she’d never seen, never experienced. She learned all she could about her land, the animals and her people. And Quadara’s dark past.

Archia had been an untouched refuge from the nation’s troubles for hundreds of years; in fact, it wasn’t until Toria had built their boats and traveled to the west that the lush island was discovered. The rest of the nation had grown desperate, their natural resources nearly depleted. And there was Archia, ripe for the taking.

While the distinct regions had each developed strengths and resources, they shared the same weakness. Jealousy.

And so began the Quadrant Wars. They lasted nearly a decade, with thousands of lives lost. During this time, the other regions attempted to conquer Archia. But their plans were foolish. As rearing livestock was foreign to Eonists, Torians grew restless and wanted to discover new lands, and Ludists didn’t want to dirty their elaborate outfits by tending to the crops.

Then the founding queens of Quadara built the walls to separate the regions, finally ending the Quadrant Wars. The walls provided space to breathe, allowing the quadrants to continue to evolve independently, and harmoniously.

Archia was once again safe.

Iris left her homeland for the first time on her eighteenth birthday, when she had been informed her mother had died. She sailed across the channel on a Torian vessel toward the palace. She took to her new world and throne without blinking, insisting she attend court minutes after her mother had been laid to rest beneath the palace. That evening she had stayed awake until the early morning, reading books on Archian history and diplomacy. Nothing could shake Iris. Not even the death of her mother.

Iris opened her green eyes to the vibrant blue sky—enjoying the break from the enduring golden palace. With the palace enclosed by a glass dome, every room, and everything within it, was cast in a golden hue. Even at night, the corridors blurred into a deep amber, as though darkness would not dare caress the queens with inky-black fingers.

When Iris looked to the clouds in the sky, she thought of her father. Not the father whose blood she shared—a man who’d never been identified by her mother—but the man who had raised her in Archia. When she was a child, he’d told her about the queens above, the deceased queens who lived in the quadrant without borders, watching the relatives they’d left behind. When she was alone, she would look to the clouds and share her gravest fears and most wondrous dreams, knowing her secrets were safe with them. Her most loyal confidants.

Then she came to the palace and met the queens. They spent every evening together—often staying up beyond a “respectable” hour to discuss their childhood, families and quadrants. Iris was no longer alone.

Still, she often looked to the sky, but now she spoke to her father, long dead.

“Father, I have not wavered,” she said. “Queenly Law is, and will always be, paramount. However, there are certain rules that pertain to the queens, to me, that I have come to see as irrelevant over the years.” Even speaking the words aloud felt wrong. Iris shook her head. She would need to be stronger, be a woman with an iron backbone. “We are the queens. We should be able to change the rules that do not affect the quadrants and the peace we uphold. We should have some control over our own lives.” She shook her head. “I will continue to fight for Archia and protect all we have, but I want more.” She shook her head again, thinking of the governor’s request. “Not more for Archia, but for me.” She hated how weak she sounded.

“I have a plan.” She let out a weighted breath. “I’ve been too many years silent. But no longer. Tomorrow things will change. Queenly Law will change. Tomorrow I will—”

A bee pricked her throat. An intense bite, followed by a dull ache. Bees, and all other bugs and insects, were supposed to have been eradicated from the garden by a spray. Another wonderful Eonist creation, Iris thought wryly. Iris didn’t object to sharing her garden with the creatures that should come with it. But the advisors had insisted it was best, for Iris’s safety.

A smile appeared on Iris’s face; perhaps nature had conquered technology in the end, beating out the spray. She couldn’t wait to gloat about her findings to Corra at tonight’s evening meal.

The bee’s sting grew more painful, to the point where Iris was unable to swallow. Saliva pooled in her throat. Was she allergic?

She brought a hand up to the bite and found a gaping ridge of skin. When she pulled her hand back, it was darkened with blood. A wail gurgled from her lips.

A figure loomed over her, teeth gleaming with menace and delight. A thin knife reflected a slice of sunlight, dripping red.

Fury flashed through her as hot blood spilled down her neck. Her arms flung backward, knocking her crown to the floor.

An outrage! I am the Archian queen!
How dare someone cut my thr—